The document NCERT Solution- Sectors of the Indian Economy Class 10 Notes | EduRev is a part of the Class 10 Course NCERT Textbooks (Class 6 to Class 12).
All you need of Class 10 at this link: Class 10

Q.4. Find the odd one out and say why.(i) Tourist guide, dhobi, tailor, potter(ii) Teacher, doctor, vegetable vendor, lawyer(iii) Postman, cobbler, soldier, police constable(iv) MTNL, Indian Railways, Air India, SAHARA Airlines, All India RadioAns.(i) Tourist GuideHe is appointed by the government, while dhobi, tailor and potter belong to the private sector.(ii) Vegetable VendorHe is the only profession that does not require formal education.(iii) CobblerThe rest are workers in the public sector, while his profession is part of the private sector(iv) SAHARA AirlinesIt is a private enterprise, while the rest are government undertakings.

Q.5. A research scholar looked at the working people in the city of Surat and found the following. 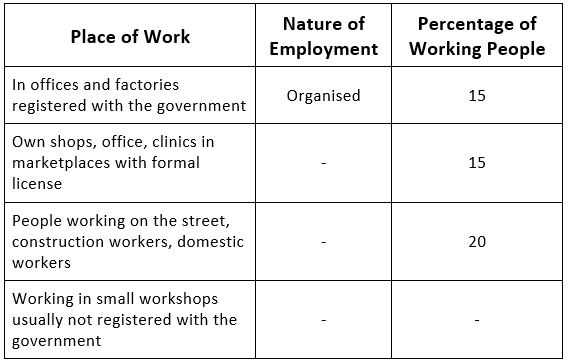 Complete the table. What is the percentage of workers in the unorganised sector in this city?Ans. The percentage of workers in the unorganised sector in this city is 70%.

Q.6. Do you think the classification of economic activities into primary, secondary, and tertiary is useful? Explain how.Ans.

Q.7. For each of the sectors that we came across in this chapter, why should one focus on employment and GDP? Could there be other issues which should be examined? Discuss.Ans.

Q.8. Make a long list of all kinds of work that you find adults around you doing for a living. In what way can you classify them? Explain your choice.Ans.

We have classified them according to the nature of the activity and according to their sector. This is a useful process as it is an easier way to layout the information.Q.9. How is the tertiary sector different from other sectors? Illustrate with a few examples.Ans.

Q.10. What do you understand by disguised unemployment? Explain with an example each from the urban and rural areas.Ans. Q.12. “Tertiary sector is not playing any significant role in the development of Indian economy.” Do you agree? Give reasons in support of your answer.Ans.

Q.13. Service sector in India employs two different kinds of people. Who are these?Ans. (i)

Q.14 Workers are exploited in the unorganised sector. Do you agree with this view? Give reasons in support of your answer.Ans. Q.15. How are the activities in the economy classified on the basis of employment conditions?Ans.They are mainly classified in two types:(i) Organised

Q.16. Compare the employment conditions prevailing in the organised and unorganised sectors.Ans.

Q.18. Using examples from your area compare and contrast the activities and functions of private and public sectors.Ans.

Q.19. Discuss and fill the following table giving one example each from your area.

Q.20. Give a few examples of public sector activities and explain why the government has taken them up.Ans.

Q.21. Explain how public sector contributes to the economic development of a nation.Ans.

Q.22. The workers in the unorganised sector need protection on the following issues: wages, safety and health. Explain with examples.Ans.

Q.24. The following table gives the GDP in Rupees (Crores) by the three sectors: