Q.1. If a trait A exists in 10% of a population of an asexually reproducing species and a trait B exists in 60% of the same population, which trait is likely to have arisen earlier?Ans.

Q.2. How does the creation of variations in a species promote survival?Ans.

Q.1. How do Mendel’s experiments show that traits may be dominant or recessive?Ans.

Q.2. How do Mendel’s experiments show that traits are inherited independently?Ans.

Q.4. How is the sex of the child determined in human beings?Ans.

(a) Natural selection: if an attribute is useful to a population, it’ll increase naturally.

(b) Genetic drift: if a species faces a catastrophic event where most of the population is wiped out, the surviving population can pass on their traits to the following generations. This may result in a rise of the attribute within the population.(c) There are cases in which some traits are not inherited but acquired by an individual during its lifetime. The acquired characters help the individual to survive better and increase its population.

Q.2. Why are traits acquired during the lifetime of an individual not inherited?

Q.3. Why are the small numbers of surviving tigers a cause of worry from the point of view of genetics?Ans. As the size of the tiger population decreases, the genetic pool of the species decreases too. This results in a limitation on the variations which will be introduced within the genetic makeup of the tigers. This lack of variation will result in serious implications. For example, if an illness spreads within the tiger population, it can potentially wipe out the whole population, possibly causing their extinction.

Q.1. What factors could lead to the rise of a new species?

Q.2. Will geographical isolation be a major factor in the speciation of a self-pollinating plant species? Why or why not?Ans.

Q.3. Will geographical isolation be a major factor in the speciation of an organism that reproduces asexually? Why or why not?Ans.

Q.1. Give an example of characteristics being used to determine how close two species are in evolutionary terms.Ans.

Q.3. What are fossils? What do they tell us about the process of evolution?Ans. Fossils are the preserved remains of animals or plants or other organisms that died out millions of years ago. These fossils tell us about a lot of extinct animals and also give insights into how evolution might have occurred. Fossils can be used to understand how an organism would have lived and what it may have looked like. More importantly, we can correlate with fossils as well as extant organisms to understand their relationships. For instance, scientists were able to recover protein sequences from a dinosaur called the T-rex, which confirmed its avian lineage. This means birds are the extant relatives of (avian) dinosaurs. Moreover, the pattern of fossil distribution gives us an idea of the time in history when various species were formed or become extinct.

Q.1. Why are human beings who look so different from each other in terms of size, colour and looks said to belong to the same species?Ans. Human beings are said to belong to the same species because of the following reasons:(i) DNA studies(ii) Number of the chromosome is the same(iii) All have a common ancestor(iv) They interbreed among themselves to produce fertile young ones of their own kind.Q.2. In evolutionary terms, can we say which among bacteria, spiders, fish and chimpanzees have a ‘better’ body design? Why or why not?Ans.

Q.2. An example of homologous organs is(a) our arm and a dog’s fore-leg.(b) our teeth and an elephant’s tusks.(c) potato and runners of grass.(d) all of the above.Ans. (d) Homologous organs have the same origin as each of the above organs, but different functions. Homologous organs can be defined as the organs of various animals having similar basic structure but different functions. For example, a whale’s flippers, a frog’s forelimbs, and man have the same basic structures but perform different functions, which is why they are called homologous organs.Q.3. In evolutionary terms, we have more in common with(a) a Chinese school-boy.(b) a chimpanzee.(c) a spider.(d) a bacterium.Ans. (a) Humans and chimpanzees are related since they belong to the identical order (Primates) and same family, (Hominidae). However, a school-boy, regardless of the ethnicity is still a Homo sapien

Q.5. How are the areas of study − evolution and classification − interlinked?Ans.

Q.6. Explain the terms analogous and homologous organs with examples.Ans. 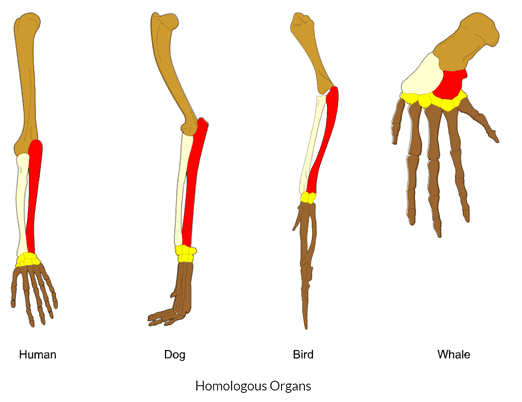 Example: The forelimbs of humans and the wings of birds look different externally but their skeletal structure is similar. It means that their origin is similar (as wings in birds are modifications of forearm) but functions are different - the wings help in flight whereas human forearm helps in various activities.

Q.7. Outline a project which aims to find the dominant coat colour in dogs.Ans.

Q.8. Explain the importance of fossils in deciding evolutionary relationships.Ans. 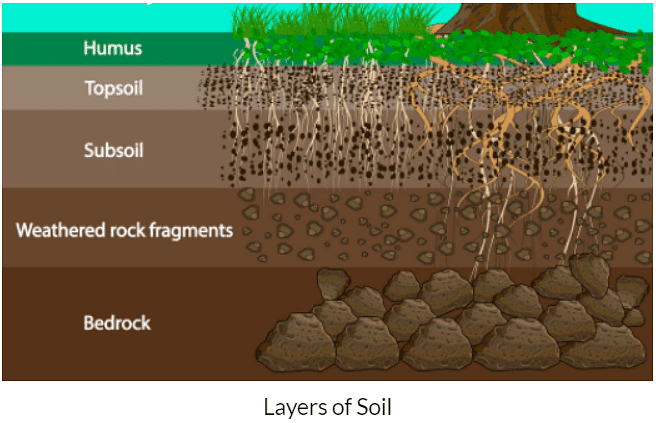 Q.9. What evidence do we have for the origin of life from inanimate matter?Ans.

Q.11. How is the equal genetic contribution of male and female parents ensured in the progeny?Ans.

Q.12. Only variations that confer an advantage to an individual organism will survive in a population. Do you agree with this statement? Why or why not?Ans.