Q1. What did Lencho hope for? Ans: Lencho hoped for rains as the only thing that his field of ripe corn needed was a shower.

Q2. Why did Lencho say the raindrops were like ‘new coins’?Ans: Lencho’s crops were ready to be harvested. As raindrops would have helped in getting a better harvest, resulting in more prosperity. So Lencho compared them with ‘new coins’.

Q3. How did the rain change? What happened to Lencho’s fields?Ans: Suddenly, a strong wind began to blow and very large hailstones began to fall along with the rain. The flowers disappeared from the plants and the corn in Lencho's fields were destroyed. 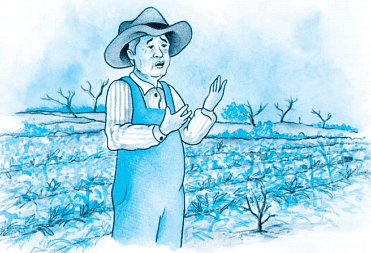 Q4. What were Lencho’s feelings when the hail stopped?Ans: After the hail stopped, Lencho's soul was filled with sadness. He could see a bleak future for him and his family. He was worried about the lack of food for the coming year.

Q1. Who or what did Lencho have faith in? What did he do?Ans: Lencho had faith in God. He believed that God’s eyes see everything, even what is deep in one’s conscience. He wrote a letter to God saying that he needed a hundred pesos(the monetary unit used in several countries) to sow his field again.Q2. Who read the letter?Ans: Postmaster read the letter.

Q3. What did the postmaster do then?Ans: The Postmaster first laughed. But then he became serious. He was deeply moved by the writer’s faith in God. He did not want to shake this faith. So he decided to collect the money and send it to Lencho.

Q1. Was Lencho surprised to find a letter for him with money in it?Ans: No, Lencho was not at all surprised to see the letter from God with money inside it. His confidence and faith in God were such that he had expected that reply from God.

Q2. What made him angry?Ans: When he finished counting the money he found only seventy pesos. But he had demanded a hundred pesos. He was confident that God could neither make a mistake nor deny him what he had requested. Therefore, he concluded that the post office employees must have taken the remaining thirty pesos.

Q1. Who does Lencho have complete faith in? Which sentences in the story tell you this? Ans: Lencho had complete faith in God. The sentences in the story that show this are as follows:(a) But in the hearts of all who lived in that solitary (single) house in the middle of the valley, there was a single hope: help from God.(b) All through the night, Lencho thought only of his one hope: the help of God, whose eyes, as he had been instructed, see everything, even what is deep in one’s conscience (Inner sense of right or wrong).(c) “God,” he wrote, “if you don’t help me, my family and I will go hungry this year.”(d) He wrote ‘To God’ on the envelope, put the letter inside and, still troubled, went to town.(e) God could not have made a mistake, nor could he have denied Lencho what he had requested.(f) It said: “God: of the money that I asked for, only seventy pesos reached me. Send me the rest, since I need it very much.” 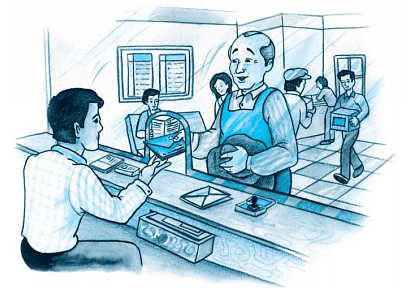 Lencho at Post-office for the Letter to God

Q4. Who does Lencho think has taken the rest of the money? What is the irony in the situation? [Remember that the irony of a situation is an unexpected aspect of it. An ironic situation is strange or amusing because it is the opposite of what is expected.]Ans: Lencho thinks that the post office employees had taken the money. It is the post office employees who sent the money to Lencho. But, on the other hand, Lencho thinks they have stolen his money. He calls them crooks (dishonest). Thus there is an element of irony in this situation.

Q5. Are there people like Lencho in the real world? What kind of a person would you say he is? You may select appropriate words from the box to answer the question.

Ans: I don't think there can be any such people in the real world. Lencho was literate and yet he didn’t know how his letter would reach God without any address. He was a naive and stupid farmer with blind faith in God and his powers.
Q6. There are two kinds of conflict in the story: between humans and nature, and between humans themselves. How are these conflicts illustrated?Ans:

Q1. There are different names in different parts of the world for storms, depending on their nature. Can you match the names in the box with their descriptions below, and fill in the blanks? You may use a dictionary to help you.

Q2. Match the sentences in Column A with the meanings of ‘hope’ in Column B. 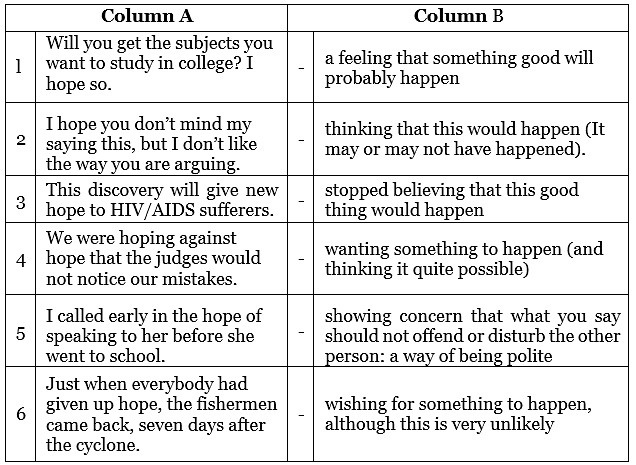 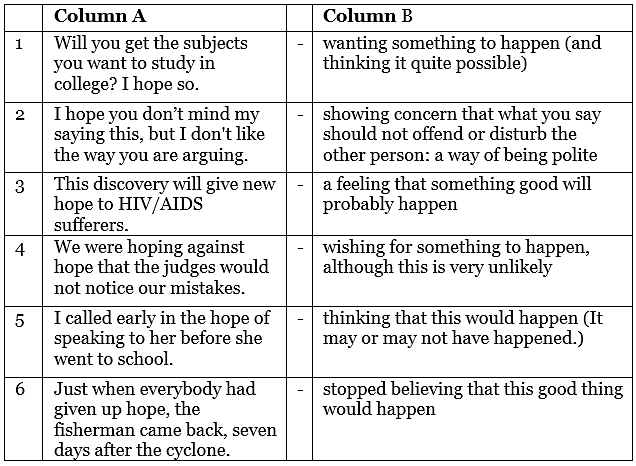 Q3. Join the sentences given below using who, whom, whose, which as suggested.(a) I often go to Mumbai. Mumbai is the commercial capital of India. (which)(b) My mother is going to host a TV show on cooking. She cooks very well. (who)(c) These sportspersons are going to meet the President. Their performance has been excellent. (whose)(d) Lencho prayed to God. His eyes see into our minds. (whose)(e) This man cheated me. I trusted him. (whom)Ans:

(a) I often go to Mumbai, which is the commercial capital of India.(b) My mother, who cooks very well, is going to host a TV show on cooking.(c) These sportspersons, whose performance has been excellent, are going to meet the President.(d) Lencho prayed to God, whose eyes see into our minds.(e) This man, whom I trusted, cheated me.

(a) The trees lost all their leaves.Not a leaf remained on the trees.(b) The letter was addressed to God himself.It was nothing less than a letter to God.(c) The postman saw this address for the first time in his career.Never in his career as a postman had he known that address.

Q5. In pairs, find metaphors from the story to complete the table below. Try to say what qualities are being compared. One has been done for you.