(i) What is an ecosystem?Ans: Plants, animals and human beings depend on their immediate surroundings. They are often interdependent on each other as well. These relations of dependence and interdependence together constitute an ecosystem. 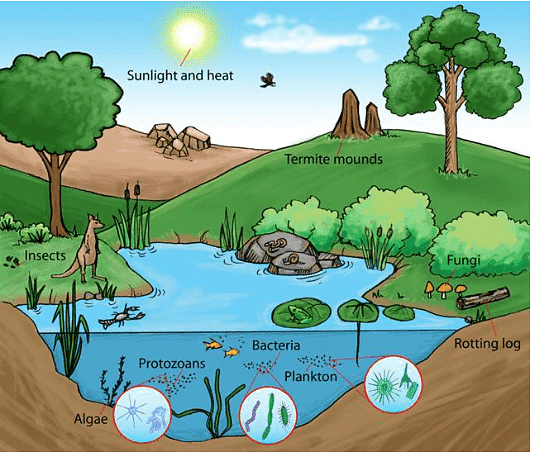 (v) What is lithosphere? Ans: Lithosphere is the solid crust or the hard-top layer of the earth which is made up of rocks and minerals and covered by a thin layer of soil.

(vii) What is biosphere? Ans: Biosphere is a narrow zone of the earth where land, water and air interact with each other to support life. It consists of plant and animal kingdom together. 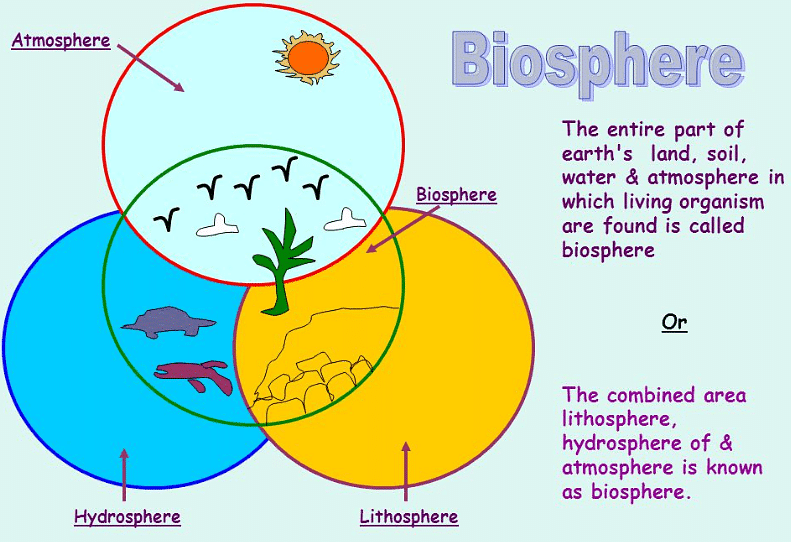 Q2. Tick the correct answer. (i) Which is not a natural ecosystem?(a) Desert(b) Aquarium(c) Forest

(iv) Which is a threat to environment? (a) Growing plant(b) Growing population(c) Growing crops

(i) Man modifies his environment.Ans: All living organisms depend on their immediate surroundings or environment. Human beings interact with their environment and modify it according to their needs. The primitive humans lived a simple life, and fulfilled their needs from the nature around them (by hunting, eating fruits, living on trees and in caves, etc.). With the progress of time, as life grew more and more complex, humans learnt newer ways to use their surroundings (growing crops, raising animals, setting up permanent settlements, etc.), for satisfying their growing needs.The discovery of fire, the invention of the wheel, the emergence of the barter system, the development of trade and commerce, the invention of the engine, the industrial revolution and the advancements in transportation and communication are some of the milestones on the road of human growth. While travelling on this road to development, humans have constantly modified all the three components of environment—natural (polluting the air by burning fuels), human (forming political and religious units) and human-made (using telephones lines for internet connectivity).

(ii) Plants and animals depend on each other.Ans: Not only are all plants, animals and human beings dependent on their environment, but they are also interdependent upon each other in several ways. For example, plants are eaten by animals as food. Through photosynthesis, plants produce oxygen, which is necessary for the survival of all living organisms. Forests are the natural habitats of wild animals, while the woods of trees are used by humans for various purposes like building houses, boats, furniture, etc.On the other hand, animals help plants reproduce by helping in the pollination of seeds. Nitrogen is essential for the survival of plants, and they are provided with this nitrogen by the bacteria that live in the soil and in the roots of some plants. Photosynthesis, which is the way by which plants make their food, depends upon factors like sunlight, water and carbon dioxide. The carbon dioxide is provided by humans and animals through respiration.