Q1. What is the difference between a reflex action and walking?Ans: Reflex action is the involuntary action that occurs in response to stimuli. They occur without the involvement of conscious areas of the brain. All the reflex actions are unconscious actions. Reflex action occurs brain and spinal cord of the central nervous systems. This kind of response occurs within a fraction of a second.

On the other hand, voluntary actions are those which occur under the control of the cerebellum of the brain. Walking is learnt as we grow. Walking is controlled by the brain. This kind of response takes longer time.Q2. What happens at the synapse between two neurons?Ans: A very small gap that occurs between the last portion of the axon of one neuron and the dendron of the other neuron is known as a synapse. It acts as a one-way valve to transmit impulses in one direction only. This uni-directional transfer of impulses occurs as the chemicals are produced on only one side of the neuron i.e., the axon’s side. From the axon, the impulses travel across the synapse to the dendron of the other neuron. 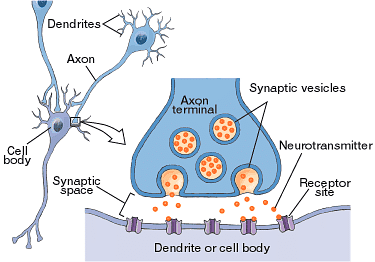 Q3. Which part of the brain maintains the posture and equilibrium of the body?Ans: Cerebellum, a part of the hindbrain is responsible for maintaining posture and equilibrium of the body.Q4. How do we detect the smell of an agarbatti (incense stick)?Ans: The thinking part of our brain is the forebrain. It has separate areas that are specialized for hearing, smelling, sight, taste, touch, etc. The fore-brain also has regions that collect information or impulses from the various receptors. When the smell of an incense stick reaches us, our fore-brain detects it. Then, the forebrain interprets it by putting it together with the information received from other receptors and also with the information already stored in the brain.Q5. What is the role of the brain in reflex action?Ans: Reflex actions are sudden responses, which do not involve any thinking. For example, when we touch a hot object, we withdraw our hand immediately without thinking as thinking may take time which would be enough to get us burnt.The sensory nerves that detect the heat are connected to the nerves that move the muscles of the hand. Such a connection of detecting the signal from the nerves (input) and responding to it quickly (output) is called a reflex arc. The reflex arcs (connections present between the input and output nerves) meet in a bundle in the spinal cord. 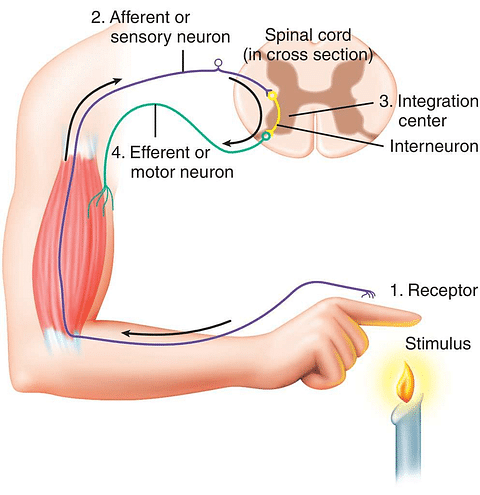 Reflex arcs are formed in the spinal cord and the information (input) reaches the brain. The brain is only aware of the signal and the response that has taken place. However, the brain has no role to play in the creation of the response.

Q3. Give an example of a plant hormone that promotes growth.Ans: Auxin is an example of a growth-promoting plant hormone. Auxins are responsible for the cell elongation in the shoot and also regulates growth.Q4. How do auxins promote the growth of a tendril around a support?Ans: Auxin is synthesized at the shoot tip. It helps the cell grow longer. When a tendril comes in contact with a support, auxin stimulates faster growth of the cells on the opposite side, so that the tendril forms a coil around the support. This makes the tendrils appear as a watch spring.Q5. Design an experiment to demonstrate hydrotropism.Ans: To demonstrate hydrotropism in plants.

On examining the roots it is observed that the roots bend towards the source of water and do not grow straight.

It confirms that plant shows hydrotropism as the roots bend towards the porous pot of water. As hydrotropism is a plant growth response in which the direction of growth is determined by a stimulus of gradient in water concentration. 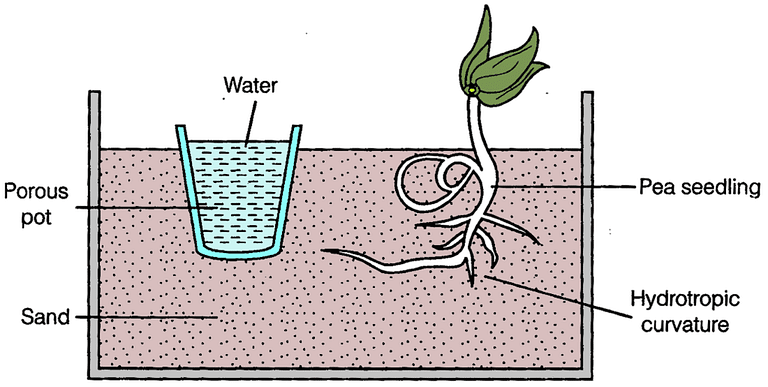 Q1. How does chemical coordination take place in animals?Ans: Chemical coordination takes place in animals with the help of hormones. Hormone is the chemical messenger that regulates the physiological processes in living organisms. It is secreted by glands. The regulation of physiological processes and control and coordination by hormones comes under the endocrine system. The nervous system along with the endocrine system in our body controls and coordinates the physiological processes.Q2. Why is the use of iodized salt advisable?Ans: Iodine stimulates the thyroid gland to produce thyroxin hormone. It regulates carbohydrate, fat, and protein metabolism in our body. Deficiency of this hormone results in the enlargement of the thyroid gland. This can lead to goitre, a disease characterized by swollen neck. Therefore, iodized salt is advised for normal functioning of the thyroid gland.Q3. How does our body respond when adrenaline is secreted into the blood?Ans: Adrenalin is a hormone secreted by the adrenal glands in case of any danger or emergency or any kinds of stress. It is secreted directly into the blood and is transported to different parts of the body.When secreted in large amounts, it speeds up the heartbeat and hence supplies more oxygen to the muscles. The breathing rate also increases due to contractions of diaphragm and rib muscles. It also increases the blood pressure. All these responses enable the body to deal with any stress or emergency.Q4. Why are some patients of diabetes treated by giving injections of insulin?Ans: Diabetes is caused due to less or no secretion of hormone insulin by pancreas. In such a person, blood sugar level is high. Insulin converts extra sugar present in blood into glycogen. Thus, patients suffering from diabetes are given insulin injection to control their blood sugar level.

Cytokinin is a plant hormone whereas Insulin, Thyroxin, Oestrogen are the hormones produced by animals.Q2. The gap between two neurons is called a(a) dendrite.(b) synapse.(c) axon.(d) impulse.Ans: (b) Synapse

The gap between two neurons is called a synapse.

Dendrite is a short branched extension of a nerve cell, along which impulses received from other cells at synapses are transmitted to the cell body.

An axon or nerve fiber is a long, slender projection of a nerve cell or neuron in vertebrates that typically conducts electrical impulses known as action potentials away from the nerve cell body. The function of the axon is to transmit information to different neurons, muscles, and glands.

Impulse an electrical signal that travels along axon.

The brain is responsible for thinking, regulating the heartbeat and balancing the body.Q4. What is the function of receptors in our body? Think of situations where receptors do not work properly. What problems are likely to arise?Ans: Receptors are sensory structures (organs/tissues or cells) present all over the body. The receptors are either grouped incase of eye or ear, or scattered incase of skin.Functions of receptors: 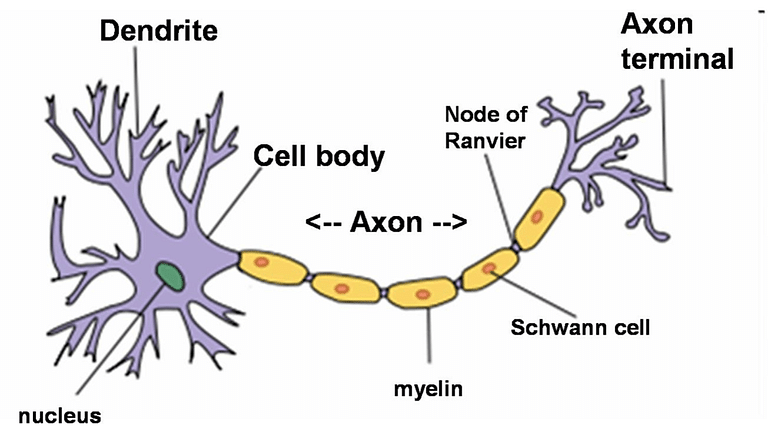 Functions of the three parts of a neuron:

Some examples of phototropism are as follows:

Q7. Which signals will get disrupted in case of a spinal cord injury?Ans: The reflex arc connections between the input and output nerves meet in a bundle in the spinal cord. In fact, nerves from all over the body meet in a bundle in the spinal cord on their way to the brain. In case of any injury to the spinal cord, the signals coming from the nerves as well as the signals coming to the receptors will be disrupted.Q8. How does chemical coordination occur in plants?Ans: In animals, control and coordination occur with the help of the nervous system. However, plants do not have a nervous system.Plants respond to stimuli by showing movements. The growth, development, and responses to the environment in plants are controlled and coordinated by a special class of chemical substances known as hormones. These hormones are produced in one part of the plant body and are translocated to other needy parts. For example, a hormone produced in roots is translocated to other parts when required. The five major types of phytohormone are auxins, gibberellins, cytokinins, abscisic acid, and ethylene. These phytohormones are either growth promoters (such as auxins, gibberellins, cytokinins, and ethylene) or growth inhibitors such as abscisic acid.Q9. What is the need for a system of control and coordination in an organism?Ans: The maintenance of the body functions in response to changes in the body by working together of various integrated body systems is known as coordination. All the movements that occur in response to stimuli are carefully coordinated and controlled. In animals, the control and coordination movements are provided by nervous and muscular systems. The nervous system sends messages to and away from the brain. The spinal cord plays an important role in the relay of messages. In the absence of this system of control and coordination, our body will not be able to function properly. For example, when we accidentally touch a hot utensil, we immediately withdraw our hand. In the absence of nerve transmission, we will not withdraw our hand and may get burnt.Q10. How are involuntary actions and reflex actions different from each other?Ans: Involuntary actions cannot be consciously controlled. For example, we cannot consciously control the movement of food in the alimentary canal. These actions are however directly under the control of the brain. On the other hand, the reflex actions such as the closing of eyes immediately when bright light is focused show sudden response and do not involve any thinking. This means that, unlike involuntary actions, reflex actions are not under the control of the brain.Q11. Compare and contrast nervous and hormonal mechanisms for control and coordination in animals.Ans:

Q12. What is the difference between the manner in which movement takes place in a sensitive plant and the movement in our legs?Ans: