Ans: Environmental chemistry is the study of chemical and biochemical processes occurring in nature. It deals with the study of origin, transport, reaction, effects, and fates of various chemical species in the environment.

Ans: Tropospheric pollution arises due to the presence of undesirable substances in the lowest layer of the atmosphere.

Oxides of sulphur, nitrogen, carbon, and hydrocarbons are the major gaseous pollutants.

Oxides of sulphur (SO2 and SO3) and nitrogen (NO2, NO) are produced as a result of burning of fossil fuels (coal, automobile fuel). These oxides react with water in the presence of atmospheric oxygen to form nitric acid (HNO3) and sulphuric acid (H2SO4), which leads to the formation of ‘Acid rain’. 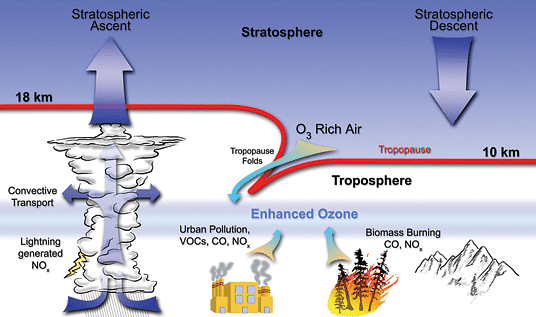 Hydrocarbons are carbon and hydrogen containing compounds that burn to produce oxides of carbon. Hydrocarbons are carcinogenic and their products are also major pollutants. Carbon monoxide (CO) is poisonous in nature as it reacts with the haemoglobin of blood, which can even result in death.

Though carbon dioxide (CO2) is not toxic in nature, yet it contributes towards global warming by trapping the reflected IR rays. This results in the heating up of the Earth’s atmosphere, thereby leading to the melting of icebergs and glaciers.

Particulates of smoke, dust, mist, and fume are harmful for human health as they are likely to block the nasal passage of a person, causing respiratory ailments. Smoke and fog combine to produce smog during a cool, humid day, thereby reducing visibility to a large extent.

Photochemical smog is formed due to the presence of PAN, ozone, formaldehyde, and acrolein. It causes eye irritation, headaches, and chest pain. It also leads to the cracking of rubber and does damage to plants.

concentration range of 3–4% of carboxyhaemoglobin decreases the oxygen-carrying capacity of blood. This results in headaches, weak eyesight, nervousness, and cardiovascular disorders. A more increased concentration may even lead to death.

Carbon dioxide is not poisonous. It proves harmful only at very high concentrations.

Ques 14.4: List gases which are responsible for greenhouse effect.

Ans:  The major greenhouse gases are:

Ques 14.5: Statues and monuments in India are affected by acid rain. How?

Ans: Acid rain is a byproduct of various human activities that leads to the emission of oxides of sulphur and nitrogen in the atmosphere. These oxides undergo oxidation and then react with water vapour to form acids.

Acid rain causes damage to buildings and structures made of stone and metal. In India, limestone is a major stone used in the construction of various monuments and statues, including the Taj Mahal.

Acid rain reacts with limestone as:

This results in the loss of lustre and colour of monuments, leading to their disfiguration.

Ques 14.6: What is smog? How is classical smog different from photochemical smog?

Ans:  Smog is a kind of air pollution. It is the blend of smoke and fog. There are two kinds of smog: 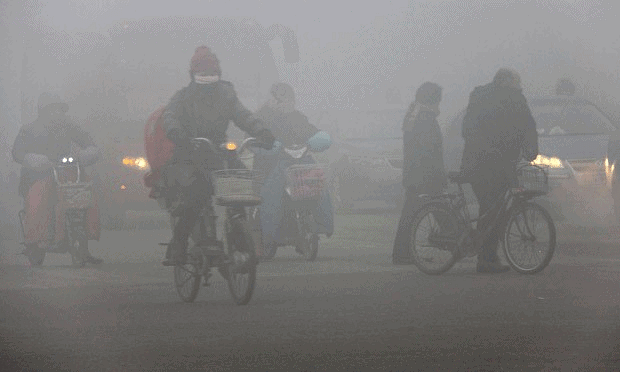 The two smogs can be differentiated as follows:

Ques 14.7: Write down the reactions involved during the formation of photochemical smog.

Burning of fossil fuels leads to the emission of hydrocarbons and nitrogen dioxide in the atmosphere. High concentrations of these pollutants in air results in their interaction with sunlight as follows:

While ozone is toxic in nature, both NO2 and O3 are oxidizing agents. They react with the unburnt hydrocarbons in air to produce formaldehyde, PAN, and acrolein.

Ques 14.8: What are the harmful effects of photochemical smog and how can they be controlled?

Photochemical smog is oxidizing smog owing to the presence of NO2 and O3, causing corrosion of metals, stones, rubber, and painted surfaces. The other major components of photochemical smog are PAN, acrolein, and formaldehyde.

Photochemical smog results from the burring of fossil fuels and automobile fuels that emit NO2 and hydrocarbons, which in turn form ozone, PAN, and other chemicals. The use of catalytic converters in automobiles is recommended to prevent the release of NO2 and hydrocarbons into the atmosphere.

Plantation of plants such as Pinus, Juniparur, Quercus, Pyrus, and Vitis is also advised as these plants have the capability to metabolize NO2.

Ques 14.9: What are the reactions involved for ozone layer depletion in the stratosphere?

Ans: In the stratosphere, ozone is a product of the action of UV radiations on dioxygen as:

One such factor is the release of chlorofluorocarbon compounds (CFCs). These are non-reactive, non-flammable molecules that are used in refrigerators, air conditioners, plastics, and electronic industries.

Once released CFCs mix with atmospheric gases and reach the stratosphere, where they are decomposed by UV radiations.

The chlorine free radical produced in reaction (iii) reacts with ozone as:

The radicals further react with atomic oxygen to produce more chlorine radicals as:

The regeneration of causes a continuous breakdown of ozone present in the stratosphere, damaging the ozone layer.

Ques 14.10: What do you mean by ozone hole? What are its consequences?

Ans: In Polar regions, stratospheric clouds provide the surface for chlorine nitrate and hypochlorous acid, which react further to give molecular chlorine. Molecular chlorine and HOCl are photolysed to give chlorine-free radicals.

The chlorine-free radicals lead to the decomposition of ozone as:

Hence, a chain reaction is initiated. The chlorine-free radical is continuously regenerated, thereby depleting the ozone layer. This phenomenon is known as the as ‘ozone hole’.

Effects of depletion of ozone layer:

The ozone layer protects the Earth from the harmful UV radiations of the sun. With the depletion of the layer, more radiation will enter the Earth’s atmosphere. UV radiations are harmful because they lead to the ageing of skin, cataract, skin cancer, and sunburns. They cause death of many phytoplanktons, which leads to a decrease in fish productivity. Excess exposure may even cause mutation in plants.

Increase in UV radiations, decreases the moisture content of the soil and damages both plants and fibres.

Ques 14.11: What are the major causes of water pollution? Explain.

Ans:  Water pollution arises as a result of several human activities, which leads to the presence of several undesirable substances in water.

Major water pollutants with their sources have been tabulated as follows:

Roles played by major pollutants are:

1. Pathogens: These water pollutants include bacteria and other organisms. They enter water from animal excreta and domestic sewage. Bacteria present in human excreta (for example, Escherichia coli and Streptococcus faecalis) cause gastrointestinal diseases.

2. Organic wastes: These are biodegradable wastes that pollute water as a result of run off. The presence of excess organic wastes in water decreases the amount of oxygen held by water. This decrease in the amount of dissolved oxygen inhibits aquatic life.

3. Chemical pollutants: These are water soluble chemicals like heavy metals such as cadmium, mercury, nickel, etc. The presence of these chemicals (above the tolerance limit) can damage the kidneys, central nervous system, and liver.

Ques 14.12: Have you ever observed any water pollution in your area? What measures would you suggest to control it?

Industries and chemical factories discharge toxic, heavy metals such as Fe, Mn, Al, etc., along with organic wastes into water. Domestic sewage and animal excreta are also responsible for pathogenic contamination of water. These pollutants make water unfit for drinking.

Therefore, all industrial and chemical discharges should be made free from toxic metals before allowing them to enter a water body. The concentration of these pollutants should be checked regularly. Compost should be preferred over chemical fertilizers in gardens and agricultural fields to avoid harmful chemicals from entering ground water.

Ques 14.13: What do you mean by Biochemical Oxygen Demand (BOD)?

Ans:  Biochemical oxygen demand is the amount of oxygen required by bacteria to decompose organic matter in a certain volume of sample of water. Clean water would have a BOD value of less than 5 ppm, whereas highly polluted water has a BOD value of 17 ppm or more.

Ques 14.14: Do you observe any soil pollution in your neighbourhood? What efforts will you make for controlling the soil pollution?

It is very important to maintain the quality and fertility of soil to ensure and sustain the growth of plants and food crops.

Insecticides like DDT are not soluble in water. For this reason, they remain in soil for a long time, contaminating the root crops. Pesticides like Aldrin and Dieldrin are non-biodegradable and highly toxic in nature. They can enter the higher trophic levels through food chains, causing metabolic and physiological disorders. The same is true for industrial wastes that comprises of several toxic metals like Pb, As, Hg, Cd, etc.

Hence, the best way to check soil pollution is to avoid direct addition of pollutants to the soil. Also, wastes should undergo proper treatment. They should be recycled and only then, allowed to be dumped.

Ques 14.15: What are pesticides and herbicides? Explain giving examples.

Ans:  Pesticides are a mixture of two or more substances. They are used for killing pests. Pests include insects, plant pathogens, weeds, mollusks, etc., that destroy the plant crop and spread diseases. Aldrin and dieldrin are the names of some common pesticides

Ques 14.16: What do you mean by green chemistry? How will it help decrease environmental pollution?

Ans:  Green chemistry is a production process that aims at using the existing knowledge and principles of chemistry for developing and implementing chemical products and processes to reduce the use and generation of substances hazardous to the environment

In green chemistry, the reactants to be used in chemical reactions are chosen in such a way that the yield of the end products is up to 100%. This prevents or limits chemical pollutants from being introduced into the environment. Through the efforts of green chemists, H2O2 has replaced tetrachlorethane and chlorine gas in drying and bleaching of paper.

Ques  14.17: What would have happened if the greenhouse gases were totally missing in the earth’s atmosphere? Discuss.

In the absence of greenhouse gases, the average temperature of the Earth will decrease drastically, making it uninhabitable. As a result, life on Earth would be impossible.

Ques 14.18: A large number of fish are suddenly found floating dead on a lake. There is no evidence of toxic dumping but you find an abundance of phytoplankton. Suggest a reason for the fish kill.

For their decomposition, they require a large amount of oxygen. Hence, they consume the oxygen dissolved in water. As a result, the BOD level of water drops below 6 ppm, inhibiting the growth of fish and causing excessive fish-kill.

Ques 14.20: For your agricultural field or garden you have developed a compost producing pit. Discuss the process in the light of bad odour, flies and recycling of wastes for a good produce.

Ans: It is essential to take proper care of the compost producing pit in order to protect ourselves from bad odour and flies.

It should be kept covered to minimize bad odour and prevent flies from entering it.

The recyclable waste should not be dumped in the compost producing pit. It should be sent to the industries through vendors for recycling.