UPSC : NCERT Solutions - On The Trial Of The Earliest People Class 6 Notes | EduRev

The document NCERT Solutions - On The Trial Of The Earliest People Class 6 Notes | EduRev is a part of the UPSC Course Social Studies (SST) Class 6.
All you need of UPSC at this link: UPSC

Ans: They provided shelter from rain, heat and wind Q2. Look at the present-day political map of the Indian subcontinent. Find out the states where Bhimbetka, Hunsgi, and Kurnool are located.Ans: Bhimbetka is in Madhya Pradesh, Hunsgi is in Karnataka and Kurnool is in Andhra Pradesh. 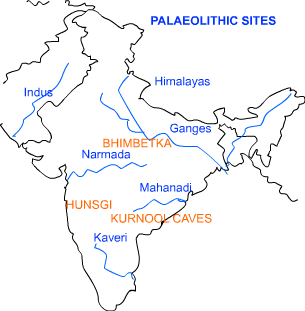 Q3. Why did the hunter-gatherers travel from place to place? In what ways are these similar to/different from the reasons for which we travel today?Ans:

The Ancient man moved from place to place mainly for four reasons,

Nowadays people travel for a variety of reasons like education, business, to meet friends and relatives and also for entertainment.

Q4. What tools would you use today for cutting fruit? What would they be made of?Ans:  We use knives for cutting and chopping the fruits, peelers for peeling fruits. These tools are made of stainless steel with wooden or plastic handles. Modern knives are very different from stone-age tools. Stone Age tools were made of stones with handles sometimes made of wood or bones.

Q5. List three ways in which hunter-gatherers used fire (see page 16). Would you use fire for any of these purposes today?Ans:

The hunters-gatherers have used the fire for the following reasons:

Differences between the two eating habits: Today, we largely eat processed and cooked food, whereas the early people did not cook their food. They ate everything raw. Q7. If you had a natural pebble-like like the ones shown on page 13 in the textbook, what would you use it for?Ans: We can use the pebbles as decorative articles in the aquariums and gardens, for making jewelry, etc. Q8. List two tasks that are performed by both men and women at present. List another two that are performed only by women, and two that are performed only by men. Compare your list with that of any two of your classmates. Do you notice any similarities/differences in your lists? Ans:

Nowadays almost all the tasks are equally performed both by men and women. Still, there are few tasks that can be done only by men or women. The below are the lists,