The document NCERT Solutions: Strategies for Enhancement in Food Production Notes | Study Biology Class 12 - NEET is a part of the NEET Course Biology Class 12.
All you need of NEET at this link: NEET 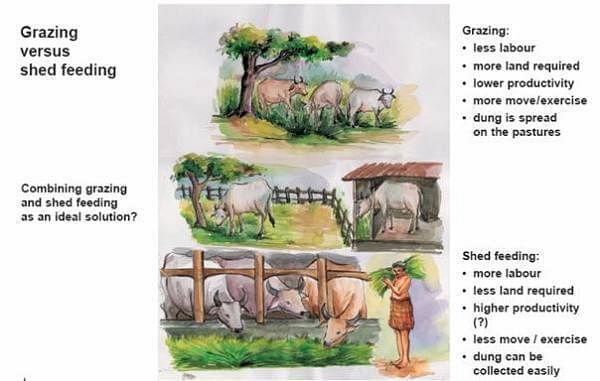 Fig:Animal husbndry human welfareThese animals are managed for the production of commercially important products such as milk, meat, wool, egg, honey, silk, etc. The increase in human population has increased the demand of these products. Hence, it is necessary to improve the management of livestock scientifically. 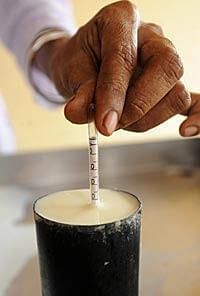 Choosing improved cattle breeds is an important factor of cattle management. Hybrid cattle breeds are produced for improved productivity. Therefore, it is essential that hybrid cattle breeds should have a combination of various desirable genes such as high milk production and high resistance to diseases. Cattle should also be given healthy and nutritious food consisting of roughage, fibre concentrates, and high levels of proteins and other nutrients.Cattle’s should be housed in proper cattle-houses and should be kept in well ventilated roofs to prevent them from harsh weather conditions such as heat, cold, and rain. Regular baths and proper brushing should be ensured to control diseases. Also, time-to-time check-ups by a veterinary doctor for symptoms of various diseases should be undertaken.Ques 3: What is meant by the term ‘breed’? What are the objectives of animal breeding?Ans: A breed is a special variety of animals within a species. It is similar in most characters such as general appearance, size, configuration, and features with other members of the same species.Jersey and Brown Swiss are examples of foreign breeds of cattle. These two varieties of cattle have the ability to produce abundant quantities of milk. This milk is very nutritious with high protein content. 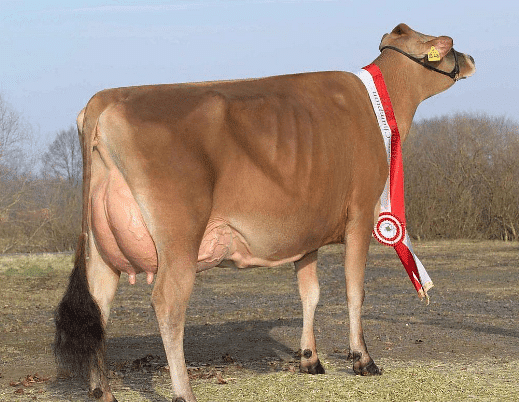 Objectives of animal breeding1. To increase the yield of animals.2. To improve the desirable qualities of the animal produce.3. To produce disease-resistant varieties of animals.Ques 4: Name the methods employed in animal breeding. According to you which one of the methods is best? Why?Ans: Animal breeding is the method of mating closely related individuals. There are several methods employed in animals breeding, which can be classified into the following categories:(a) Natural methods of breeding include inbreeding and out-breeding. Breeding between animals of the same breed is known as inbreeding, while breeding between animals of different breeds is known as out breeding. Outbreeding of animals is of three types:1. Out-crossing: In this type of out-breeding, the mating of animals occurs within the same breed. Thus, they have no common ancestors up to the last 4-5 generations.2. Cross-breeding: In this type of out-breeding, the mating occurs between different breeds of the same species, thereby producing a hybrid.3.  Inter-specific hybridization: In this type of out-breeding, the mating occurs between different species.(b) Artificial methods of breeding include modern techniques of breeding. It involves controlled breeding experiments, which are of two types:

1. Artificial insemination: It is a process of introducing the semen (collected from the male) into the oviduct or the uterus of the female body by the breeder. This method of breeding helps the breeder overcome certain problems faced in abnormal mating.

2. Multiple ovulation embryo technology (MOET): It is a technique for cattle improvement in which super ovulation is induced by a hormone injection. Then, fertilization is achieved by artificial insemination and early embryos are collected. Each of these embryos are then transplanted into the surrogate mother for further development of the embryo.The best method to carry out animal breeding is the artificial method of breeding, which includes artificial insemination and MOET technology. These technologies are scientific in nature. They help overcome problems of normal mating and have a high success rate of crossing between mature males and females.Also, it ensures the production of hybrids with the desired qualities. This method is highly economical as a small amount of semen from the male can be used to inseminate several cattle.Ques 5: What is apiculture? How is it important in our lives?Ans: Apiculture is the practice of bee-keeping for the production of various products such as honey, bee’s wax, etc. Honey is a highly nutritious food source and is used as an indigenous system of medicines. 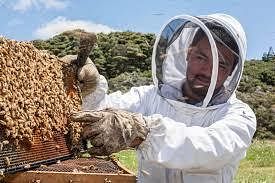 It is useful in the treatment of many disorders such as cold, flu, and dysentery. Other commercial products obtained from honey bees include bee’s wax and bee pollen.

Bee’s wax is used for making cosmetics, polishes, and is even used in several medicinal preparations.Therefore, to meet the increasing demand of honey, people have started practicing bee-keeping on a large scale. It has become an income generating activity for farmers since it requires a low investment and is labour intensive.Ques 6: Discuss the role of fishery in enhancement of food production.Ans: Fishery is an industry which deals with catching, processing, and marketing of fishes and other aquatic animals that have a high economic value. Some commercially important aquatic animals are prawns crabs, oysters, lobsters, and octopus. Fisheries play an important role in the Indian economy. 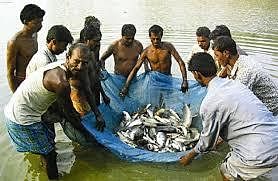 This is because a large part of the Indian population is dependent on fishes as a source of food, which is both cheap and high in animal protein. A Fishery is an employment generating industry especially for people staying in the coastal areas. Both fresh water fishes (such as Catla, Rohu, etc) and marine fishes (such as tuna, mackerel pomfret, etc.) are of high economic value.Ques 7: Briefly describe various steps involved in plant breeding. Ans: Plant breeding is the process in which two genetically dissimilar varieties are purposely crossed to produce a new hybrid variety. As a result, characteristics from both parents can be obtained in the hybrid plant variety.

Thus, it involves the production of a new variety with the desired characteristics such as resistance to diseases, climatic adaptability, and better productivity. The various steps involved in plant breeding are as follows:1. Collection of genetic variability: Genetic variability from various wild relatives of the cultivated species are collected to maintain the genetic diversity of a species. The entire collection of the diverse alleles of a gene in a crop is called the germplasm collection.2. Evaluation of germplasm and selection of parents: The germplasm collected is then evaluated for the desirable genes. The selected plants with the desired genes are then used as parents in plant breeding experiments and are multiplied by the process of hybridization.3. Cross-hybridization between selected parents: The next step in plant breeding is to combine the desirable characters present in two different parents to produce hybrids. It is a tedious job as one has to ensure that the pollen grains collected from the male parent reach the stigma of the female parent.4. Selection of superior hybrids: The progenies of the hybrids having the desired characteristics are selected through scientific evaluation. The selected progenies are then self-pollinated for several generations to ensure homozygosity.5. Testing, release, and commercialization of new cultivars: The selected progenies are evaluated for characters such as yield, resistance to diseases, performance, etc. by growing them in research fields for at least three growing seasons in different parts of the country. After thorough testing and evaluation, the selected varieties are given to the farmers for growing in fields for a large-scale production.Ques 8: Explain what is meant by bio-fortification. Ans: Bio-fortification is a process of breeding crops with higher levels of vitamins, minerals, proteins, and fat content. This method is employed to improve public health. Breeding of crops with improved nutritional quality is undertaken to improve the content of proteins, oil, vitamins, minerals, and micro-nutrients in crops.

It is also undertaken to upgrade the quality of oil and proteins. An example of this is a wheat variety known as Atlas 66, which has high protein content in comparison to the existing wheat. In addition, there are several other improved varieties of crop plants such as rice, carrots, spinach etc. which have more nutritious value and more nutrients than the existing varieties.Ques 9: Which part of the plant is best suited for making virus-free plants and why? Ans: Apical and axillary meristems of plants is used for making virus-free plants. In a diseased plant, only this region is not infected by the virus as compared to the rest of the plant region. 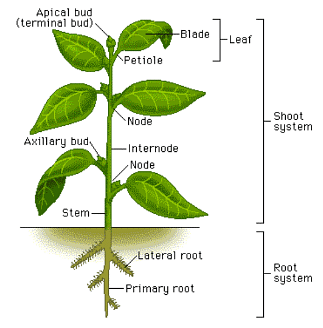 Hence, the scientists remove axillary and apical meristems of the diseased plant and grow it in vitro to obtain a disease-free and healthy plant. Virus-free plants of banana, sugarcane, and potato have been obtained using this method by scientists.Ques 10: What is the major advantage of producing plants by micro propagation? Ans: Micro propagation is a method of producing new plants in a short duration using plant tissue culture. Some major advantages of micro propagation are as follows:1. Micro propagation helps in the propagation of a large number of plants in a short span of time.2. The plants produced are identical to the mother plant.3. It leads to the production of healthier plantlets, which exhibit better disease-resisting powers.Ques 11: Find out what the various components of the medium used for propagation of explants in vitro are? Ans: The major components of medium used for propagation of explants in vitro are carbon sources such as sucrose, inorganic salts, vitamins, amino acids, water, agar-agar, and certain growth hormones such as auxins and gibberellins.Ques 12: Name any five hybrid varieties of crop plants which have been developed in India.

Ans: The five hybrid varieties of crop plants which have been developed in India are:

The document NCERT Solutions: Strategies for Enhancement in Food Production Notes | Study Biology Class 12 - NEET is a part of the NEET Course Biology Class 12.
All you need of NEET at this link: NEET