B.2 Follow the patterns discussed in B1 and write sentences using the ideas in the table below. You will need to match the items first

example: I'll go for a walk if the weather is fine.

Answer:1. I shall write a letter if we don't have enough of work.2. We shall go to cinema, if you get the tickets.3. I'll go shopping tomorrow, if I earn enough money today.4. You'll pass exams if you do not go out.

B. 3 Complete the following conditional sentences using the clues given.

Ans. I'll take you out in the evening if  you let me do my work now.

Ans. If you travel without reservation, you will be asked to get off the train.

Ans. If you insult my brother again, I'll complain to the principal.

Ans.  If the rain continues to be heavy, school sports day may be cancelled.

Ans. If he exercises regularly, he can lose weight.

C. The 'Unreal' or 'Hypothetical' Conditional.

C.1 Read the imaginary situations given below and complete the sentence that describes the situation in each case. One has been done for you as an example.

C.2 Complete the sentences below in the same pattern as in the example, choosing the words from the box. 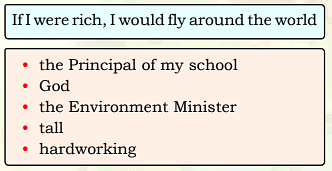 3. If I were ____________ Ans.  If I were the Environment Minister, I would take strict action against those who destroy wildlife.

If + past perfectwould + have + past participle

If they had brought the man to the hospital immediately after the accident, his life would have been saved.

Construct sentences in the above pattern using the clues given:

D.4 Read the clues below and say what the company should have done/ should not have done in order to produce a more successful car.

Some years ago, a three-wheeled electric car was launched by Hindustan Electric Company. Although it was a revolutionary vehicle, it was a commercial disaster. The Company did very little research, but believed the product would be successful. The car did not have a very powerful engine, so it was not very fast. As a result it did not appeal to adults. However, even though it was small and slow, the car was not suitable for children either. It did not appear to be safe to use on the road because it was so small. It was also very expensive. The Company had to stop production, after losing millions of rupees. 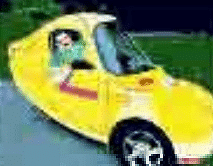 Because so many things were wrong with the car, it was impossible for the company to sell it successfully. The company should have been more careful.

Read the clues below and say what the company should have done/ should not have done in order to produce a more successful car.

2. (powerful) (fast)Ans.  If the car engine had been powerful, it would have moved fast.

3. (expensive) (suitable)Ans.  If  it hadn't been expensive, it would have been suitable for children.

D.5 Ashok had a terrible day yesterday. Look at the chain of events that happened to him.

Use the type of sentence you used in the last exercise to write down his thoughts. Start like this:

E.1 In pairs, complete the sentences below as shown in the example:

F. Conditionals without 'IF’

Tick the correct option from the words in italics. Think carefully.

Make similar sentences using the clues given below. Do not use if.

Answer:1. As long as children receive love, they develop stronger.2. Unless people do not eat well, exercise alone will not make them healthy.3. Providing examination are not being conducted on time, it will waste a year.4. Unless the movie is short and interesting, it will not be a hit.5. Provided that journal is not useful and attractive, it will not become popular.

Match the phrases from columns A and B to form meaningful sentences. Rewrite them in the space provided below. The first one has been done for you.

Answer:1.  If I save enough money, I may go to America this summer.2.  I will come over to your place, provided that I have finished my homework.3.  As long as you pay, you can be a member of the club.4.  If you need money, let me know5.  I’ll miss my flight, unless I get up early tomorrow.6.  If I were rich, I would run a charity home.7.  I shall be selected for the Olympics, provided I win this race.8.  I wouldn’t have gone for a swim, if you had warned me about the pollution.9.  If you put salt in water, it dissolves.10.  You would probably have passed the exam, if you had worked harder.