(ii) Mesoeconomics‘Mesoeconomics’ studies the intermediate level of economic organization in between the micro and the macro economics like institutional arrangements etc. 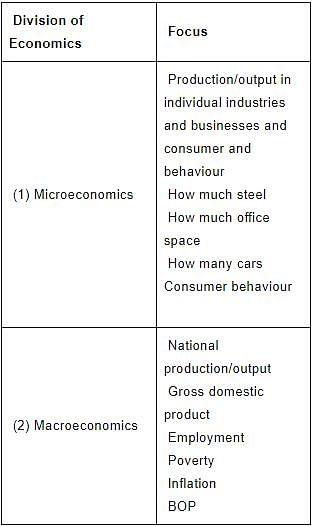 There are broadly the following approaches in the mainstream economics. The basis of all the streams is the same: resources are scarce while wants are unlimited (often mentioned as the economic problem).(i) Keynesian theory of Macro Economics

(ii) Neo-liberalismNeo-liberalism refers to advocacy of policies such as individual liberty, free markets, and free trade. Neo- liberalism “proposes that human well being can best be advanced by liberating individual entrepreneurial freedoms and skills within an institutional framework characterized by strong private property rights, free markets and free trade”.(iii) Socialist theory of EconomicsIn distinction to the above, there is the school of socialist economics based on public (State) ownership of means of production to achieve greater equality and give the workers greater control of the means of production. It establishes fully centrally planned economy which is also called command economy -economy is at the command of the State. Private ownership of assets is not allowed. For example, erstwhile USSR, Cuba etc.(iv) Development EconomicsDevelopment economics is a branch of economics which deals with economic aspects of the development process, mainly in low income countries. Its focus is not only promoting economic grow thand structural change but also improving the well being of the population as a whole through health and education and work place Conditions, whether through public or private channels. The most prominent contemporary development economists are Nobel laureates Amartya Sen and Joseph Stiglitz.(v) Structural ChangeStructural change of an economy refers to along - term wide spread change of a fundamental structure, rather than micro-scale or short - term change. For example a subsistence economy is transformed into a manufacturing economy, or a regulated mixed economy is liberalized. An insulated and protectionist economy becomes open and globalized. A current structural change in the world economy is globalization.(vi) Green EconomicsGreen economics focuses on and supports the harmonious interaction between humans and nature and attempts to reconcile the two.(vii) Economic Growth and its Measument MethodsEconomic growth is the change- increase or decrease, in the value of goods and services produced by an economy. If it is positive, it means an increase in the output and the income of a country. It is generally shown as the increase in percentage terms of real gross domestic product (GDP adjusted to inflation) or real GDP.(viii) Measuring GrowthMeasures of national income and output are used in economics to estimate the value of goods and services produced in an economy. They use a system of national accounts or national accounting. Some of the common measures are Gross National Product (GNP) and Gross Domestic Product (GDP).(ix) National Income Accounting

(xi) Factor CostsFactor costs are the actual production costs at which goods and services are produced by the firms and industries in an economy. They are really the costs of all the factors of production such as land, labour, capital, energy, raw materials like steel etc. that are used to produce & given quantity of output in an economy. They are also called factor gate costs (farm gate, firm gate and factory gate) since all the costs that are incurred to produce a given quantity of goods and services take place behind the factory gate i.e. within the walls of the firms, plants etc in an economy.(xii) Transfer PaymentsTransfer payment refers to payments made by government to individuals for which there no economic activity is produced in return by these individuals. Examples of transfer are scholarship, pension.

(iv) Differences between GDP and GNP