All citizens cannot take direct part in making every decision. Therefore, representatives are elected by the people. This is how elections become important. Whenever we think of India as a democracy, our mind invariably turns to the last elections. Elections have today become the most visible symbol of the democratic process. We often distinguish between direct and indirect democracy.

A direct democracy is one where the citizens directly participate in the day-to-day decision making and in the running of the government. The ancient city-states in Greece were considered examples of direct democracy.

Many would consider local governments, especially gram sabhas, to be closest examples of direct democracy. But this kind of direct democracy cannot be practiced when a decision has to be taken by lakhs and crores or people. That is why rule by the people usually means rule by people's representatives.

Election system in India: To Understand it better, let us look one dramatic instance.

In the Lok Sabha elections of 1984, the Congress party came to power winning 415 of the 543 Lok Sabha seats — more than 80% of the seats. Such a victory was never achieved by any party in the Lok Sabha. What did this election show?

The Congress party won four-fifths of the seats. Does it mean that four out of five Indian voters voted for the Congress party? Actually not. Take a look at the enclosed table. The Congress party got 48% of the votes. This means that only 48% of those who voted, voted in favour of the candidates put up by the Congress party, but the party still managed to win more than 80% of the seats in the Lok Sabha. Lqok at the performance of other parties. The BJP got 7.4 percent votes but less than one percent seats. How did that happen? This happened because in our country we follow a special method of elections. Under this system:(i) The entire country is divided into 543 constituencies;(ii) Each constituency elects one representative; and 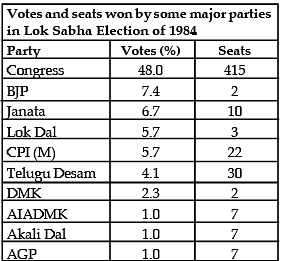 (iii) The candidate who secures the highest number of votes in that constituency is declared elected.

It is important to note that in this system whoever has more votes than all other candidates, is declared elected. The winning candidate need not secure a majority of the votes. This method is called the First Past the Post (FPTP) system In the electoral race, the candidate who is ahead of others, who crosses the winning post first of all, is the winner. This method is also called the Plurality System. This is the method of election prescribed by the Constitution.Example: The Congress party won greater share of seats than its share of votes because in many of the constituencies in which its candidates won, they secured less than 50% of the votes. If there are several candidates, the winning candidate often gets much less than 50% of the votes. The votes that go to all the losing candidates go ‘waste’, for those candidates or parties get no seat from those votes. Suppose a party gets only 25 percent of the votes in every constituency, but everyone else gets even less votes. In that case, the party could win all the seats with only 25 percent votes or even less.(i) Proportional Representation

(iii) Why did India adopt the First system?

We have noticed that in the FPTP election system, the candidate who secures the highest votes in a particular constituency is declared elected. This often works to the disadvantage of the smaller social groups. This is even more significant in the Indian social context. We have had a history of caste based discrimination. In such a social system, the FPTP electoral system can mean that the dominant social groups and castes can win everywhere and the oppressed social groups may continue to remain unrepresented. Our Constitution makers were aware of this difficulty and the need to provide a way to ensure fair and just representation to the oppressed social groups.

This issue was debated even before independence and the British government had introduced ‘separate electorates’. This system meant that for electing a representative from a particular community, only those voters would be eligible who belong to that community. In the constituent assembly, many members expressed a fear that this will not suit our purposes. Therefore, it was decided to adopt the system of reserved constituencies. In this system, all voters in a constituency are eligible to vote but the candidates must belong to only a particular community or social section for which the seat is reserved. There are certain social groups which may be spread across the Country. In a particular constituency, their numbers may not be sufficient to be able to influence a victory of a candidate. However, taken across the country they are a significantly size able group. To ensure their proper representation, a system of reservation becomes necessary. The Constitution provides for reservation of seats in the Lok Sabha and State Legislative Assemblies for the Scheduled Castes and Scheduled Tribes. This provision was made initially for a period of 10 years and as a result of successive constitutional amendments, has been extended up to 2010. The Parliament can take a decision to further extend it, when the period of reservation expires. The number of seats reserved for both of these groups is in proportion to their share in the population of India. Today, of the 543 elected seats in the Lok Sabha, 79 are reserved for Scheduled Castes and 41 are reserved for Scheduled Tribes.

The Constitution does not make similar reservation for other disadvantaged groups. Of late there has been a strong demand seeking reservation of seats in the Lok Sabha and State Assemblies for women. Given the fact that very few women are elected to representative bodies, the demand for reserving one-third seats for women is increasingly being articulated. Reservation of seats for women has been provided for in rural and urban local bodies. A similar provision for Lok Sabha and Vidhan Sabhas would require an amendment to the Constitution. Such an amendment has been proposed several times in the Parliament but has not yet been passed.