NERVOUS SYSTEM: THE TELEGRAPHIC SYSTEM OF COMMUNICATION AND CO-ORDINATION

HormonesThe endocrine system is a collection of glands that secrete chemical messages we call hormones. These signals are passed through the blood to arrive at a target organ, which has cells possessing the appropriate receptor. Exocrine glands (not part of the endocrine system) secrete products that are passed outside the body. Sweat glands, salivary glands, and digestive glands are examples of exocrine glands. Hormones are grouped into three classes based on their structure:

Steroids are lipids derived from cholesterol. Testosterone is the male sex hormone. Estradiol, similar in structure to testosterone, is responsible for many female sex characteristics. Steroid hormones are secreted by the gonads, adrenal cortex, and placenta.

Peptides are short chains of amino acids; most hormones are peptides. They are secreted by the pituitary, parathyroid, heart, stomach, liver, and kidneys. Amines are derived from the amino acid tyrosine and are secreted from the thyroid and the adrenal medulla. Solubility of the various hormone classes varies.

Most animals with well-developed nervous and circulatory systems have an endocrine system. Most of the similarities among the endocrine systems of crustaceans, arthropods, and vertebrates are examples of convergent evolution. The vertebrate endocrine system consists of glands (pituitary, thyroid, adrenal), and diffuse cell groups secreted in epithelial tissues. More than fifty different hormones are secreted. Endocrine glands arise during development for all three embryologic tissue layers (endoderm, mesoderm, ectoderm). The type of endocrine product is determined by which tissue layer a gland originated in. Glands of ectodermal and endodermal origin produce peptide and amine hormones; mesodermal-origin glands secrete hormones based on lipids.

i. Endocrine Systems and Feedback Cycles 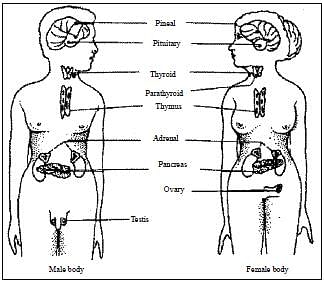 The endocrine system acts by releasing hormones that in turn trigger actions in specific target cells. Receptors on target cell membranes bind only to one type of hormone. More than fifty human hormones have been identified; all act by binding to receptor molecules. The binding hormone changes the shape of the receptor causing the response to the hormone. There are two mechanisms of hormone action on all target cells.

The second mechanism involves steroid hormones, which pass through the plasma membrane and act in a two step process. Steroid hormones bind, once inside the cell, to the nuclear membrane receptors, producing an activated hormone-receptor complex. The activated hormone-receptor complex binds to DNA and activates specific genes, increasing production of proteins.

The Nervous and Endocrine Systems

Growth hormone (GH) is a peptide anterior pituitary hormone essential for growth. GH releasing hormone stimulates release of GH. GH inhibiting hormone suppresses the release of GH. The hypothalamus maintains homeostatic levels of GH. Cells under the action of GH increase in size (hypertrophy) and number (hyperplasia). GH also causes increase in bone length and thickness by deposition of cartilage at the ends of bones. During adolescence, sex hormones cause replacement of cartilage by bone, halting further bone growth even though GH is still present. Too little or two much GH can cause dwarfism or gigantism, respectively. Hypothalamus receptors monitor blood levels of thyroid hormones. Low blood levels of Thyroid-stimulating hormone (TSH) cause the release of TSH-releasing hormone from the hypothalamus, which in turn causes the release of TSH from the anterior pituitary. TSH travels to the thyroid where it promotes production of thyroid hormones, which in turn regulate metabolic rates and body temperatures. Gonadotropins and prolactin are also secreted by the anterior pituitary. Gonadotropins (which include follicle-stimulating hormone, FSH, and luteinizing hormone, LH) affect the gonads by stimulating gamete formation and production of sex hormones. Prolactin is secreted near the end of pregnancy and prepares the breasts for milk production.

The posterior pituitary stores and releases hormones into the blood. Antidiuretic hormone (ADH) and oxytocin are produced in the hypothalamus and transported by axons to the posterior pituitary where they are dumped into the blood. ADH controls water balance in the body and blood pressure. Oxytocin is a small peptide hormone that stimulates uterine contractions during childbirth.

Thyroid secretion is usually higher in winter than in summer. Childbirth is hormonally controlled, and is highest between 2 and 7 AM. Internal cycles of hormone production are controlled by the hypothalamus, specifically the suprachiasmic nucleus (SCN). According to one model, the SCN is signaled by messages from the light-detecting retina of the eyes. The SCN signals the pineal gland in the brain to signal the hypothalamus, etc.

Endocrines: The Postal System of Communication and Co-Ordination

ENDOCRINE GLAND OF THE BODY

Pancreas — the endocrine department of the pancreas is scattered throughout its substance in the form of tiny islands. The islands have been named as ‘islets of Langerhans’. The islets have two major type of cells called A and B. The A cells secrete the hormone ‘glucagon’ while the B cells secrete insulin. Insulin has discovered by Frederick Grand banting and Charles Herbert Best. Reduction on the quantity of effective insulin gives rise to diabetes mellitus (diabetes, siphon, mellitus of honey) commonly called simply diabetes. Food and glucose to be blood, while exercise and insulin remove it.The six endocrine glands of the body are.a. Thyroidb. Pancreasc. Adrenalsd. Gonadse. Parathyroidsf. Pituitary

Bite is an essential supplement to the recreations enzyme for digestion of fats.

Large Intestine (colon)– The absorption of water is an important function 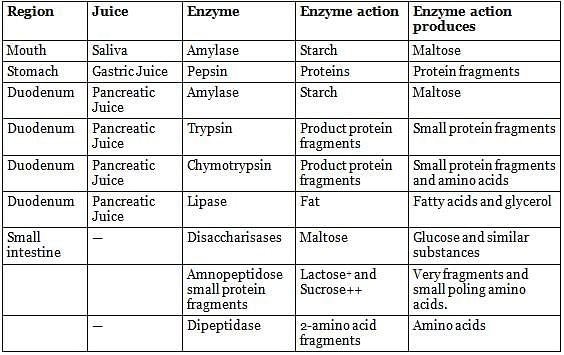 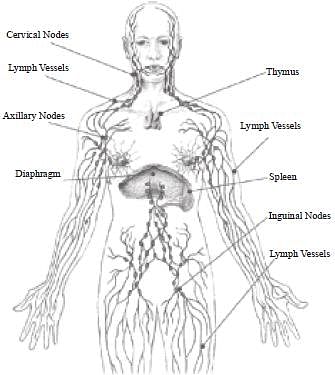 Barriers to entry are the skin and mucous membranes.1. The skin is a passive barrier to infectious agents such as bacteria and viruses. The organisms living on the skin surface are unable to penetrate the layers of dead skin at the surface. Tears and saliva secrete enzymes that breakdown bacterial cell walls. Skin glands secrete chemicals that retard the growth of bacteria.2. Mucus membranes lining the respiratory, digestive, urinary, and reproductive tracts secrete mucus that forms another barrier. Physical barriers are the first line of defense.3. When microorganisms penetrate skin or epithelium lining respiratory, digestive, or urinary tracts, inflammation results. Damaged cells release chemical signals such as histamine that increase capillary blood flow into the affected area (causing the areas to become heated and reddened). The heat makes the environment unfavorable for microbes, promotes healing, raises mobility of white blood cells, and increases the metabolic rate of nearby cells. Capillaries pass fluid into intelstinal areas, causing the infected/injured area to swell.4. Clotting factors trigger formation of many small blood clots. Finally, monocytes (a type of white blood cell) clean up dead microbes, cells, and debris.5. If this is not enough to stop the invaders, the complement system and immune response act.6. Protective proteins that are produced in the liver include the complement system of proteins. The complement system proteins bind to a bacterium and open pores in its membrane through which fluids and salt move, swelling and bursting the cell. The complement system directly kills microbes, supplements inflammatory response, and works with the immune response. It complements the actions of the immune system. Complement proteins are made in the liver and become active in a sequence (C1 activates C2, etc.). The final five proteins form a membrane attack complex (MAC) that embeds itself into the plasma membrane of the attacker.7. Salts enter the invader, facilitating water to cross the membrane, swelling and bursting the microbe. Complement also functions in the immune response by tagging the outer surface of invaders for attack by phagocytes.8. Interferon is a species-specific chemical produced by cells that are viral attack. It alerts nearby cells to prepare for a virus. The cells that have been contacted by interferon resist all viral attacks.