The document NCERT Summary: Natural Vegetation - 1 Notes | EduRev is a part of the UPSC Course Geography for UPSC CSE.
All you need of UPSC at this link: UPSC

Natural vegetation refers to a plant community that has been left undisturbed over a long time. So as to allow its individual species to adjust themselves to climate and soil conditions as fully as possible. 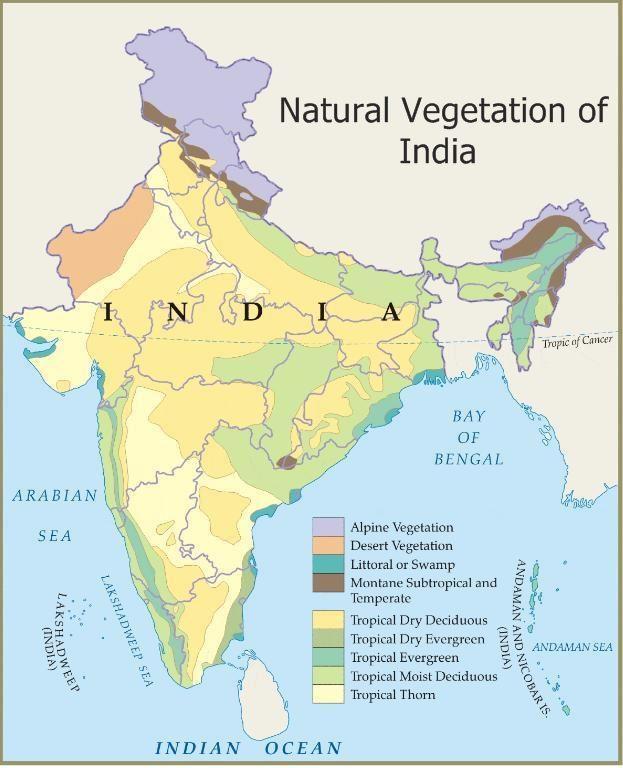 India is a land of great variety of natural vegetation. Himalayan heights are marked with temperate vegetation; the Western Ghats and the Andaman Nicobar Islands have tropical rain forests, the deltaic regions have tropical forests and mangroves; the desert and semi desert areas of Rajasthan are known for cacti, a wide variety of bushes and thorny vegetation. Depending upon the variations in the climate and the soil, the vegetation of India changes from one region to another.

On the basis of certain common features such as predominant vegetation type and climatic regions, Indian forests can be divided into the following groups:

India has a rich variety of wetland habitats. About 70 per cent of this comprises areas under paddy cultivation. The total area of wetland is 3.9 million hectares. Two sites-Chilika Lake (Odisha) and Keoladeo National Park (Bharatpur) are protected as water-fowl habitats under the Convention of Wetlands of International Importance (Ramsar Convention).

The country’s wetlands have been grouped into eight categories:

They consist of a number of salt tolerant species of plants. Crisscrossed by creeks of stagnant water and tidal flows, these forests give shelter to a wide variety of birds.

In India, the mangrove forests spread over 6,740 sq. km which is 7 percent of the world’s mangrove forests. They are highly developed in the Andaman and Nicobar Islands and the Sundarbans of West Bengal. Other areas of significance are the Mahanadi, the Godavari and the Krishna deltas. These forests too, are being encroached upon, and hence, need conservation.

Try yourself:Which of the following type of forest most widespread in India?
Explanation

Tropical Deciduous Forests: These are the most widespread forests in India. They are also called the monsoon forests. They spread over regions which receive rainfall between 70-200 cm. On the basis of the availability of water, these forests are further divided into moist and dry deciduous.

On the basis of the percentage of the actual forest cover, the states have been grouped into four regions.

Forests have an intricate interrelationships with life and environment. These provide numerous direct and indirect advantages to our economy and society. Hence, conservation of forest is of vital importance to the survival and prosperity of mankind. Accordingly, the Government of India proposed to have a nation-wide forest conservation policy, and adopted a forest policy in 1952, which was further modified in 1988. According to the new forest policy, the Government will emphasis sustainable forest management in order to conserve and expand forest reserve on the one hand, and to meet the needs of local people on the other.

(i) Bringing 33 percent of the geographical area under forest cover;(ii) Maintaining environmental stability and to restore forests where ecological balance was disturbed;(iii) Conserving the natural heritage of  the country, its biological diversity and genetic pool;(iv) Checks soil erosion, extension of the desert lands and reduction of floods and droughts;(v) Increasing the forest cover through social forestry and afforestation on degraded land;(vi) Increasing the productivity of forests to make timber, fuel, fodder and food available to rural population dependence on forests, and encourage the substitution of wood;(vii) Creating of a massive peoples movement involving women to encourage planting of trees, stop felling of trees, and thus, reduce pressure on the existing forest.

Based on the forest conservation policy the following steps were initiated:

➢ Social ForestrySocial forestry means the management and protection of forests and afforestation on barren lands with the purpose of helping in the environmental, social and rural development. 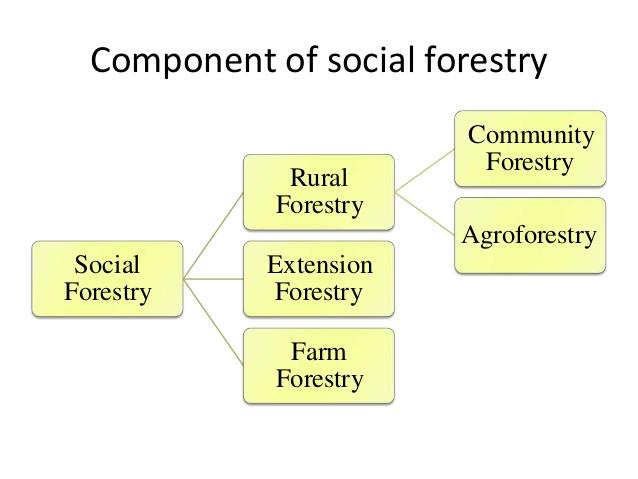 The National Commission on Agriculture (1976) has classified social forestry into three categories. These are Urban forestry, Rural forestry and Farm forestry.