The study of seismic waves provides a complete picture of the layered interior. An earthquake in simple words in shaking of the earth. This is a natural event. It is caused due to release of energy, which generates waves that ravel in all directions. 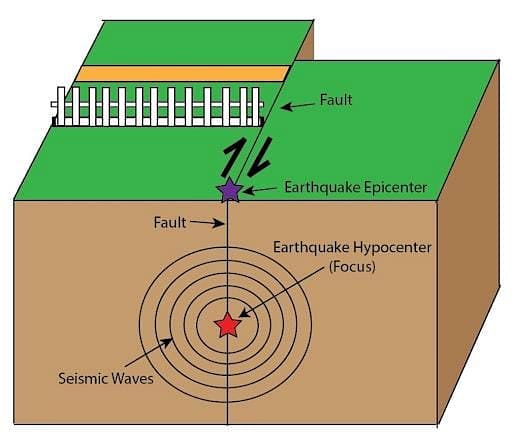 Why does the earth shake?The release of energy occurs along a fault. A fault is a sharp break in the crustal rocks. Rocks along a fault tend to move in opposite directions. As the overlying rock strata press them, the friction locks them together. However, their tendency to move apart at some point of time overcomes the friction. As a result, the blocks get deformed and eventually, they slide past one another  abruptly. This causes a release of energy, and the energy waves travel in all directions. The point where the energy is released is called the focus of an earthquake, alternatively, it is called the hypocenter. The energy waves travelling in different directions reach the surface. The point on the surface, nearest to the focus, is called epicenter. It is the first one to experience the waves. It is a point directly above the focus.

Earthquake WavesAll natural earthquakes take place in the lithosphere. It is sufficient to note here that the lithosphere refers to the portion of depth up to 200 km from the surface of the earth. 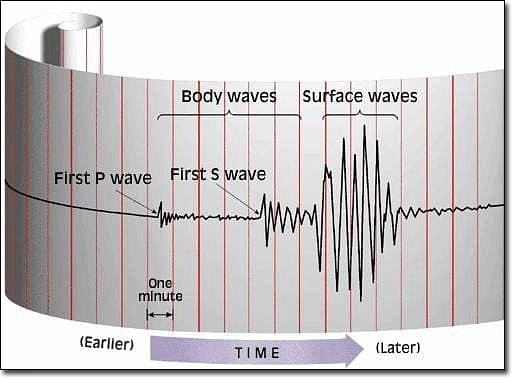 An instrument called ‘seismograph’ records the waves reaching the surface. Note that the curve shows three distinct sections each representing different types of wave patterns. Earthquake waves are basically of two types- body waves and surface waves. Body waves are generated due to the release of energy at the focus and move in all directions travelling through the body of the earth. Hence, the name body waves. The body waves interact with the surface rocks and generate new set of waves called surface waves. These waves move along the surface. The velocity of waves changes as they travel through materials with different densities. The denser the material, the higher is the velocity. Their direction also changes as they reflect or refract when coming across materials with different densities.

These are called secondary waves. An important fact about S-waves is that they can travel only through solid materials. This characteristic of the S-waves is quite important.

It has helped scientists to understand the structure of the interior of the earth. Reflection causes waves to rebound whereas refraction makes waves move in different directions. The variations in the direction of waves are inferred with the help of their record on seismograph. The surface waves are the last to report on seismograph. These waves are more destructive. They cause displacement of rocks, and hence, the collapse of structures occurs.

Propagation of Earthquake WavesDifferent types of earthquake waves travel in different manners. As they move or propagate, they cause vibration in the body of the rocks through which they pass. P-waves vibrate parallel to the direction of the wave.

Earthquake waves get recorded in seismographs located at far off locations.

However, there exist some specific areas where the waves are not reported. Such a zone is called the ‘shadow zone’. The study of different events reveals that for each earthquake, there exists an altogether different shadow zone.

Though the actual quake activity lasts for a few seconds, its effects are devastating provided the magnitude of the quake is more than 5 on the Richter scale.

Structure of the Earth 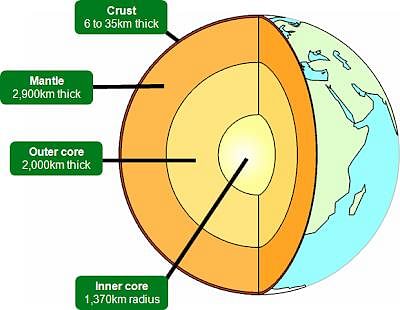 The MantleThe portion of the interior beyond the crust s called the mantle. The mantle extends from Moho’s discontinuity to a depth of 2,900 km. The upper portion of the mantle is called asthenosphere. The word astheno means weak. It is considered to be extending upto 400 km. It is the main source of magma that finds its way to the surface during volcanic eruptions. It has s density higher than the crust’s (3.4 g/cm3). The crust and the uppermost part of the mantle are called lithosphere. Its thickness ranges from 10-200 km. The lower mantle extends beyond the asthenosphere. It is in solid state.

The CoreAs indicated earlier, the earthquake wave velocities helped in understanding the existence of the core of the earth. The core mantle boundary is located at the depth of 2,900 km. The outer core is in liquid state while the inner core is in solid state. The desnity of material at the mantle core boundary is around 5 g/cm3 and at the centre of the earth at 6,300 km. the density value is around 13 g/cm3. The core is made up of very heavy material mostly constituted by nickel and iron. It is sometimes referred to as the knife layer.

Volcanoes and Volcanic landformsA volcano is a place where gases, ashes and/or molten rock material- lava- escape to the ground. A volcano is called an active volcano if the materials mentioned are being released or have been released out in the recent past. The layer below the solid crust is mantle. It has higher density than that of the crust. The mantle contains a weaker zone called asthenosphere. It is from this that the molten rock materials find their way to the surface. The material in the upper mantle portion is called magma. Once it starts moving towards the crust or it reaches the surface, it is referred to as lava. The material that reaches the ground includes lava flows, pyroclastic debris, volcanic bombs, ash and dust and gases such as nitrogen compounds, sulphur compounds and minor amounts of chlorine, hydrogen and argon. 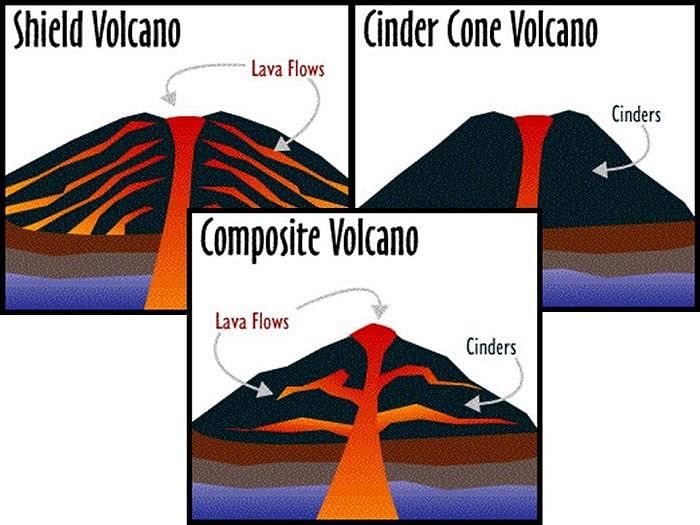 Volcanoes are classified on the basis of nature of eruption and the form developed at the surface. Major types of volcanoes are as follows:

Shield VolcanoesBarring the basalt flows, the shield volcanoes the largest of all the volcanoes on the earth, The Hawaiian volcanoes are the most famous examples. These volcanoes are mostly made up of basalt, a type of lava that is very fluid when erupted. For this reason, these volcanoes are not steep. They become explosive if somehow water gets into the vent; otherwise, they are characterized by low-explosivity. The upcoming lava moves in the form of a fountain and throws out the cone at the top of the vent and develops into cinder cone.

Composite VolcanoesThese volcanoes are characterized by eruptions of cooler and mokre viscous lavas than basalt. These volcanoes often result in explosive eruptions. Along with lava, large quantities of pyroclastic material and ashes find their way to the ground. This material accumulates in the vicinity of the vent openings leading to formation of layers, and this makes the mounts appear as composite volcanoes.

CalderaThese are the most explosive of the earth’s volcanoes. They are usually so explosive that when they erupt they tend to collapse on themselves rather than building any tall structure. The collapsed depressions are called calderas. Their explosiveness indicates that the magma chamber supplying the lava is not only huge but is also in close vicinity.

Flood Basalt ProvincesThese volcanoes outpour highly fluid lava that flows for long distances. Some parts of the world are covered by thousands of sq. km. of thick basalt lava flows. There can be a series of flows with some flows attaining thickness of more than 50 m. Individual flows may extend for hundreds of km. The Deccan Traps from India, presently covering most of the Maharashtra plateau, are a much large flood basalt province. It is believed that initially the trap formations covered a much larger area than the present. Mid-Ocean Ridge Volcanoes: These volcanoes occur in  the oceanic areas. There is a system of midocean ridges more than 70,000 km long that stretches through all the ocean basins. The central portion of this ridge experiences frequent eruptions. 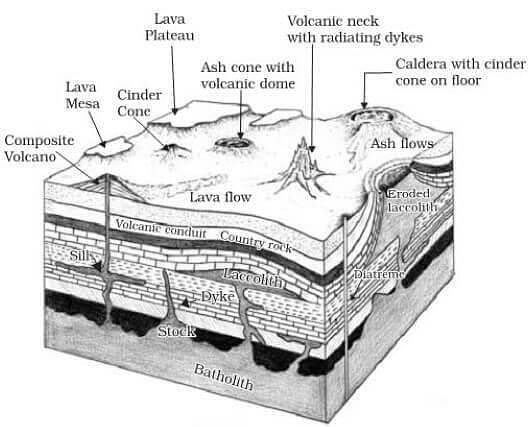 Intrusive Forms: The lava that is released during volcanic eruptions on cooling develops into igneous rocks. The cooling may take place either on reaching the surface or also while the lava is still in the crustal portion. Depending on the location of the cooling of the lava, igneous rocks are classified as volcanic rocks (cooling at the surface) and plutonic rocks (cooling in the crust). The lava that cools within the crustal portions assumes different forms. These forms are called intrusive forms.

Batholiths: A large body of magmatic material that cools in the deeper depth of the crust develops in the form of large domes. They appear on the surface only after the denudational processes remove the overlying materials. They cover large areas, and at times, assume depth that may be several km. These are granitic bodies. Batholiths are the cooled portion of magma chambers.

Laccoliths: These are large domeshaped intrusive bodies with a level base and connected by a pipe-like conduit from below. It resembles the surface volcanic domes of composite volcano, only these are located at deeper depths. It can be regarded as the localized source of lava that finds its way to the surface. The Karnataka plateau is spotted with domal hills of granite rocks. Most of these, now exfoliated, are examples of laccoliths or batholiths.

Lapolith, Phacolith and Sills As and when the lava moves upwards, a portion of the same may tend to move in a horizontal direction wherever it finds a weak plane. It may get rested in different forms. In case it develops into a saucer shape, concave to the sky body, it is called lapolith. A wavy mass of intrusive rocks, at times, is found at the base of synclines or at the top of anticline in folded igneous country. Such wavy materials have a definite conduit to source beneath in the form of magma chambers (subsequently developed as batholiths). These are called the phacoliths. The near horizontal bodies of the intrusive igneous rocks are called sill or sheet, depending on the thickness of the material. The thinner ones are called sheets while the thick horizontal deposits are called sills.

Dykes: When the lava makes its way through cracks and the fissures developed in the land, it solidifies almost perpendicular to the ground. It gets cooled in the same position to develop a wall-like structure. Such structures are called dykes. These are the most commonly found intrusive forms in the western Maharashtra area. These are considered the feeders for the eruptions that led to the development of the Deccan traps.