Water is a cyclic resource with abundant supplies on the globe. Approximately, 71 per cent of the earth’s surface is covered with it but fresh water constitutes only about 3 per cent of the total water. In fact, a very small proportion of fresh water is effectively available for human use. The availability of fresh water varies over space and time. 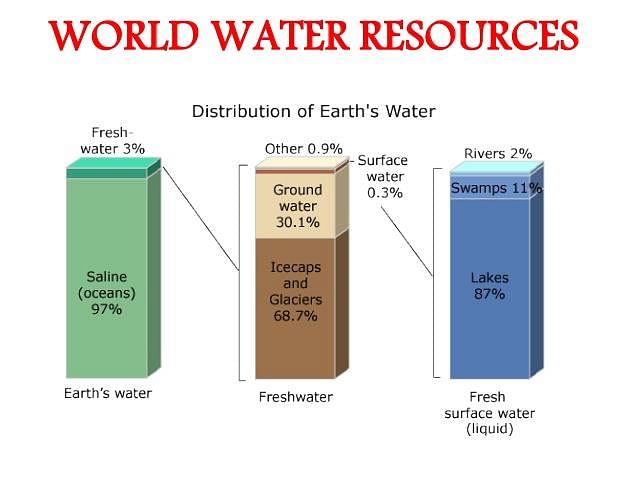 Water Resources of India: India accounts for about 2.45 per cent of world’s surface areas, 4 per cent of the world’s water resources and about 16 per cent of world’s population. The total water available from precipitation in the country in a year is about 4,000 cubic km. The availability from surface water and replenishable groundwater is 1,869 cubic km. Out of this only 60 per cent can be put to beneficial uses. Thus, the total utilizable water resource in the country is only 1,122 cubic km.

Surface Water Resources: There are four major sources of surface water. These are rivers, lakes, ponds, and tanks. In the country, there are about 10,360 rivers and their tributaries longer than 1.6 km each. The mean annual flow in all the river basins in India is estimated to be 1,869 cubic km. However, due to topographical, hydrological and other constraints, only about 690 cubic km (32 per cent) of the available surface water can be utilized. Water flow in a river depends on size of its catchment area or river basin and rainfall within its catchment area. Given that precipitation is relatively high in the catchment areas of the Ganga, the Brahmaputra and the Barak rivers, these rivers, although account for only about one-third of the total area in the country, have 60 per cent of the total surface water resource. Much of the annual water flow in south Indian rivers like the Godavari, the Krishna, and the Kaveri has been harnessed, but it is yet to be done in the Brahmaputra and the Ganga basins. 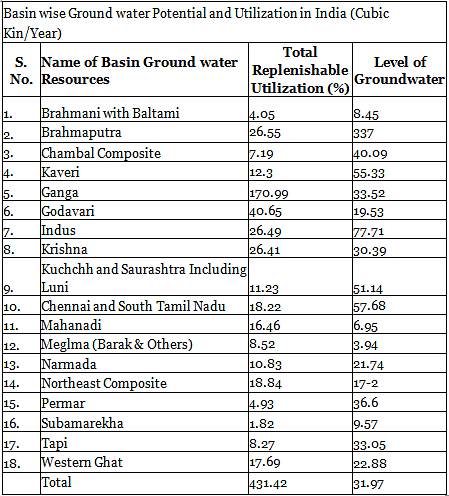 The groundwater utilization is very high in the states of Punjab, Haryana, Rajasthan, and Tamil Nadu. However, there are States like Chhatisgarh, Orissa, Kerala, etc., which utilize only a small proportion of their groundwater potentials. States like Gujarat, Uttar Pradesh, Bihar, Tripura and Maharashtra are utilizing their ground water resources at a moderate rate. If the present trend continues, the demands for water would need the supplies. And such situation, will be detrimental to development, and can cause social upheaval and disruptions.

Water Demand and Utilization India has traditionally been an agrarian economy, and about two-third of its population have been dependent on agriculture. Hence, development of irrigation to increase agricultural production has been assigned a very high priority in the Five Year Plans, and multipurpose river valleys projects like the Bhakra-Nangal, Hirakund, Damodar, Valley, Nagarjuna Sagar, Indira Gandhi Canal Project, etc. have been taken up. In fact, India’s water demand at present is dominated by irrigational needs.

Demand of Water for Irrigation: In agriculture, water is mainly used for irrigation. Irrigation is needed because of spatiotemporal variability in rainfall in the country. The large tracts of the country are deficient in rainfall and are drought prone. North-Western India and Deccan plateau constitute such areas. Winter and summer seasons are more or less dry in most part of the country. Provisions of irrigation makes multiple cropping possible. It has also been found that irrigated lands have higher agricultural productivity than un-irrigated land. Further, the high yielding varieties of crops need regular moisture supply, which is made possible only by a developed irrigation systems. In fact, this is why that green revolution strategy of agriculture development in the country has largely been successful in Punjab, Haryana and western Uttar Pradesh.

In Punjab, Haryana and Western Uttar Pradesh more than 85 per cent of their net sown area is under irrigation. Wheat and rice are grown mainly with the help of irrigation in these states. Of the total net irrigated area 76.1 per cent in Punjab and 51.3 per cent in Haryana are irrigated through wells and tube wells. This shows that these states utilize large proportion of their ground water potential which has resulted in ground water depletion in these states. The share of area irrigated through wells and tube wells is also very high in the states given in table.

The over-use of ground water resources has led to decline in ground water table in these states. In fact, over withdrawals in some states like Rajasthan, and Maharashtra has increased fluoride concentration in ground-water, and this practice has led to increase in concentration of arsenic in parts  of West Bengal and Bihar. 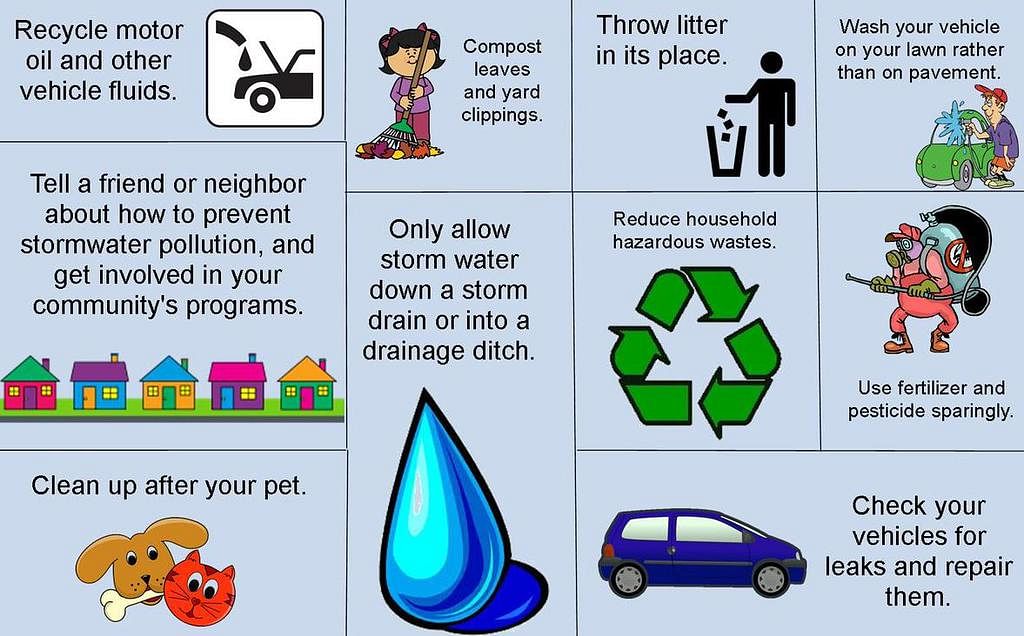 The Central Pollution Control Board (CPCB) in collaboration with State Pollution Control Boards has been monitoring water quality of national aquatic resources at 507 stations. The data obtained from these stations show that organic and bacterial contamination continues to be the main source of pollution in rivers. The Yamuna river is the most polluted river in the country between Delhi and Etawah.

Other severely polluted rivers are: the Sabarmati at Ahmedabad, the Gomti at Lucknow, the Kali, the Adyar, the Cooum (entire stretches), the Vaigai at Madurai and the Musi of Hyderabad and the Ganga at Kanpur and Varanasi. Groundwater pollution has occurred due to high concentrations of heavy/toxic metals, fluoride and nitrates at different parts of the country.

The legislative provisions such as the Water (Prevention and Control of Pollution) Act 1974, and Environment Protection Act 1986 have not been implemented effectively. The result is that in 1997, 251 polluting industries were located along the rivers and lakes.

The Water Cess Act, 1977, meant to reduce pollution has also made marginal impacts. There is a strong need to generate public awareness about importance of water and impacts of water pollution. The public awareness and action can be very effective in reducing the pollutants from agricultural activities, domestic and industrial discharges.

Watershed Management: Watershed management basically refers to efficient management and conservation of surface and groundwater resources. It involves prevention of runoff and storage and recharge of groundwater through various methods like percolation tanks, recharge wells, etc. However, in broad sense watershed management includes conservation, regeneration and judicious use of all resources natural (like land, water, plants and animals) and human with in a watershed. 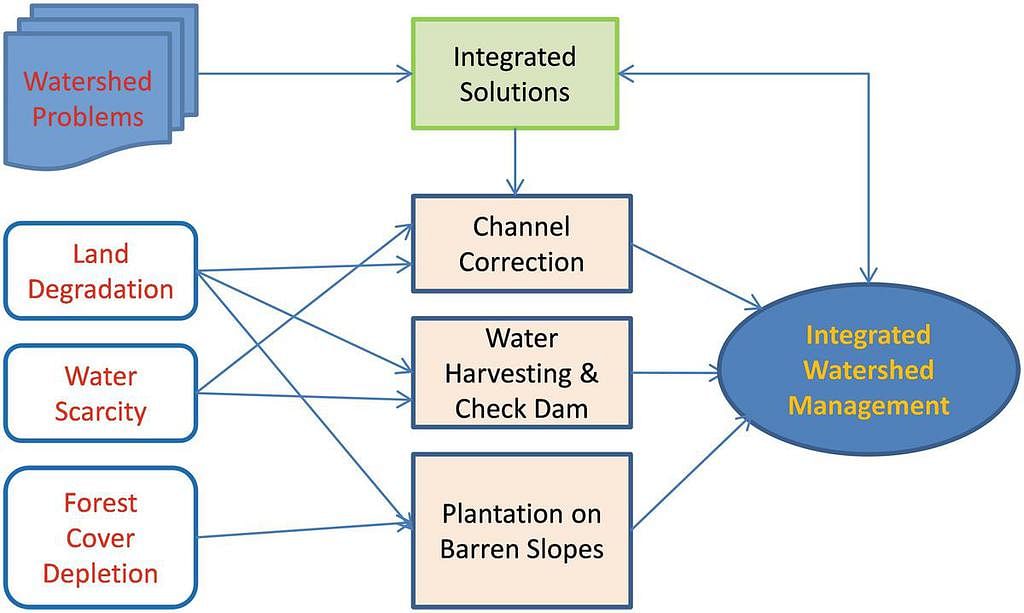 Watershed management aims at bringing about balance between natural resources on the one hand and society on the other. The success of watershed development largely depends upon community participation.

The Central and State Governments have initiated many watershed development and management programmes in the country. Some of these are being implemented by nongovernmental organizations also. Haryali is a watershed development project sponsored by the Central Government which aims at enabling the rural population to conserve water for drinking, irrigation, fisheries and afforestation. The Project is being executed by Gram Panchayats with people’s participation.

Watershed development projects in some areas have been successful in rejuvenating environment and economy. However, are only a few success stories. In majority of cases, the programme is still in its nascent stage. There is a need to generate awareness regarding benefits of watershed development and management among people in the country, and through this integrated water resource management approach water availability can be ensured on sustainable basis.

Rainwater Harvesting: Rain water harvesting is a method to capture and store rainwater for various uses. It is also used to recharge groundwater aquifers. It is a low cost and eco-friendly technique for preserving every drop of water by guiding the rain water to bore well, pits and wells. Rainwater harvesting increases water availability, checks the declining ground water table, improves the quality of groundwater through dilution of contaminants like fluoride and nitrates, prevents soil erosion, and flooding and arrests salt water intrusion in coastal areas if used to recharge aquifers.

Rainwater harvesting has been practiced through various methods by different communities in the country for a long time. Traditional rain water harvesting in rural areas is done by using surface storage bodies like lakes, ponds, irrigation tanks, etc. In Rajasthan, rainwater harvesting structures locally known as Kund or Tanka (a covered underground tank) are constructed near or in the house or village to store harvested rainwater.

There is a wide scope to use rainwater harvesting technique to conserve water resource. It can be done by harvesting rainwater on rooftops and open spaces.

Harvesting rainwater also decreases the community dependence on groundwater for domestic use. Besides bridging the demand supply gap, it can also save energy to pump groundwater as recharge leads to rise in groundwater. These days rainwater harvesting is being taken up on massive scale in many states in the country. Urban areas can specially benefit from rainwater harvesting as water demand has already outstripped supply in most of the cities and towns.

Apart from the above mentioned factors, the issue desalinization of water particularly in coastal areas and brackish water in arid and semi-arid areas, transfer of water from water surplus areas to water deficit areas through inter linking of rivers can be important remedies for solving water problem in India (read more about inter linking of rivers). However, the most important issue from the point of view of individual users, household and communities is pricing of water.