i. Physics is a quantitative science, based on measurement of physical quantities. Certain physical quantities have been chosen as fundamental or base quantities (such as length, mass, time, electric current, thermodynamic temperature, amount of substance, and luminous intensity).

iii. Other physical quantities, derived from the base quantities, can be expressed as a combination of the base units and are called derived units. A complete set  of units, both fundamental and derived, is called a system of units.

iv. The International System of Units (SI) based on seven base units is at present internationally accepted unit system and is widely used throughout the world. The SI units are used in all physical measurements, for both the base quantities and the derived quantities obtained from them. Certain derived units are expressed by means of SI units with special names (such as joule, newton, watt, etc).

v. The SI units have well defined and internationally accepted unit symbols (such as m for metre, kg for kilogram, s for second, A for ampere, N for newton etc.). Physical measurements are usually expressed for small and large quantities in scientific notation, with powers of 10. Scientific notation and the prefixes are used to simplify measurement notation and numerical computation, giving indication to the precision of the numbers.

vi. Unit of Length: The SI Unit of length is metre(m). Various other metric units used for measuring length are related to the metre by either multiples or submultiples of 10. Thus,

vii. Unit of Mass: The SI Unit of mass is kilogram(kg). Various other metric units used for measuring mass are related to the kilogram by either multiples or submultiples of 10. Thus,

viii. Unit of Time: The SI unit of time is the second (s).

SI Base Quantities and Units: 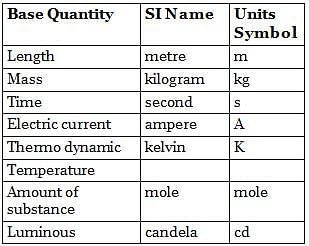 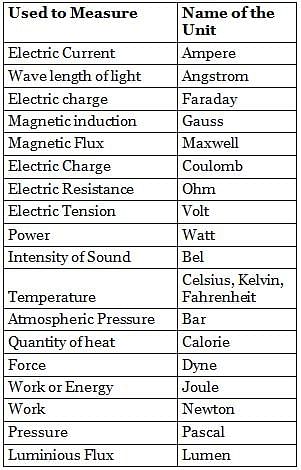 WAVES: There are three types of waves:

2. Electromagnetic waves do not require a medium to travel (light, radio).3. Matter waves are produced by electrons and particles.