The document NCERT Summary: Transport & Communication - 1 Notes | EduRev is a part of the UPSC Course Geography for UPSC CSE.
All you need of UPSC at this link: UPSC

Road Transport: India has one of the largest road networks in the world with a total length of 33.1 lakh km (2005). About 85 per cent of passenger and 70 per cent of freight traffic are carried by roads every year. Road transport is relatively suitable for shorter distance travel.

Road transport in modern sense was very limited in India before World War-II. The first serious attempt was made in 1943 when ‘Nagpur Plan’ was drawn. This plan could not be implemented due to lack of coordination among the princely states and British India. After Independence, twentyyear road plan (1961) was introduced to improve the conditions of roads in India. However, roads continue to concentrate in and around urban centres. Rural and remote areas had the least connectivity by road.

For the purpose of construction and maintenance, roads are classified as National Highways (NH), State Highways (SH), Major District Roads and Rural Roads.

The National Highways Authority of India (NHAI) was operationalized in 1995. It is an autonomous body under the Ministry of Surface Transport. It is entrusted with the responsibility of development, maintenance and operation of National Highways. This is also the apex body to improve the quality of the roads designated as National Highways. 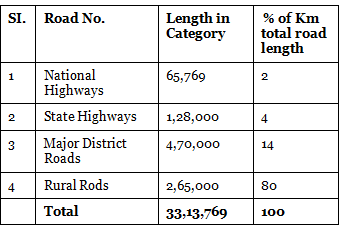 State Highways: These are constructed and maintained by state governments. They join the state capitals with district headquarters and other important towns. These roads are connected to the National Highways. These constitute 4 per cent of total road length in the country.

In order to consolidate his empire Shershah Suri built the road from Indus Valley (Pakistan) to Soner Valley in Bangal. This was coordinating Kolkata to Peshawar later on named as Grand Trunk Road during the British period. In the present time it has been divided into two part between Amritsar to Kolkata. (a) National Highway (NH-I) from Delhi to Amritsar. (b) National Highway (NH-2) Delhi to Kolkata.

District Roads: These roads are the connecting link between District Headquarters and the other important nodes in the district. They account for 14 per cent of the total road length of the country.

Rural Roads: These roads are vital for providing links in the rural areas. About 80 per cent of the total road length in India are categorized as rural roads. There is regional variation in the density of rural because these are influenced by the nature of the terrain.

Other Roads: Other roads include Border Roads and International Highways. The Border Road Organization (BRO) was established in May 1960 for accelerating economic development and strengthening defence preparedness through rapid and coordinated improvement of strategically important roads along the northern and north-eastern boundary of the country. It is a premier multifaceted construction agency. It has constructed roads in high altitude mountainous terrain joining Chandigarh with Manali (Himachal Pradesh) and Leh (Ladakh). This road runs at an average altitude of 4,270 metres above the mean sea level.

This organization has completed over 40,450 km of roads by March 2005. Apart from the construction and maintenance of roads in strategically sensitive areas, the BRO also undertakes snow clearance in high altitude areas. The international highways are meant to promote the harmonious relationship with the neighbouring countries by providing effective links with India.

The distribution of roads is not uniform in the country. Density of roads (length of roads per 100 square km of area) varies from only 10.48 km in Jammu and Kashmir to 387.24 km in Kerala with a national average of 75.42 km. The density of road is high in most of the northern states and major southern states. It is low in the Himalayan region, Madhya Pradesh and Rajasthan. Why does this variation occur? Nature of terrain and the level of economic development are the main determinants of density of roads. Construction of roads is easy and cheaper in the plain areas while it is difficult and costly in hilly and plateau areas. Therefore, not only the density but also the quality of roads is relatively better in plains as compared to roads in high altitude areas, rainy and forested regions.

NHAI has taken up some major projects in the country under different phases:Golden Quadrilateral: It comprises construction of 5,846 km long 4/6 lane, high density traffic corridor, to connect India’s four big metro cities of Delhi-Mumbai Chennai-Kolkata. With the construction of Golden Quadrilateral, the time-distance and cost of movement among the mega cities of India will be considerably minimized.

North-South and East-West Corridors: North-South corridor aims at connecting Srinagar in Jammu and Kashmir and Kaniyakumari in Tamil Nadu (including Kochi-Salempur) with 4,076 km long road. The East-West Corridor has been planned to connect Silchar in Assam with the port town of Porbandar in Gujarat with 3,640 km of road length.

Indian Railway was introduced in 1853, when a line was constructed from Bombay to Thane covering a distance of 34 km.

Indian Railways is the largest government undertaking in the country. The length of Indian Railways network is 63,221 km. Its very large size puts lots of pressure on a centralized railway management system. Thus, in India, the railway system has been divided into sixteen zones. Table shows the zone-wise performance of Indian Railways.

Areas around towns, raw material producing areas and of plantations and other commercial crops, hill stations and cantonment towns were well-connected by railways from the British colonial era. These were mostly developed for the exploitation of resources. After the Independence of the country, railway routes have been extended to other areas too. The most significant development has been the development of Konkan Railway along the western coast providing a direct link between Mumbai and Mangalore. Railway continuous to remain the main means of transport for the masses. Railway network is relatively less dense in the hill states, north eastern states, central parts of India and Rajasthan.

Rural Roads: These roads received special impetus under the Pradhan Mantri Grameen Sadak Yojana. Under this scheme special provisions are made so that every village in the country is linked to a major town in the country by an all season motorable road.

Konkan Railway: Konkan Railway was a great achievement of Indian railway in 1998. It is 760 km long track extending from Roha in Karnataka to Mangalore. This railway crosses 146 rivers, 2000 bridges and 91 tunnels, has longest tunnels of the Asia having 6.5 km in length. It is joint enterprise of Karnataka, Goa and Maharashtra government. 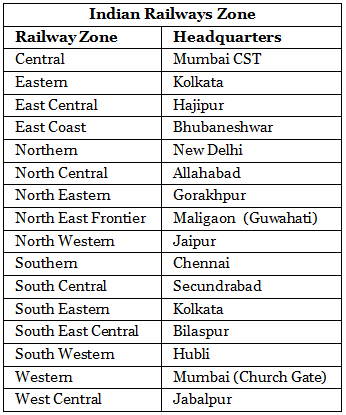 Waterways is an important mode of transport for both passenger and cargo traffic in India. It is the cheapest means of transport and is most suitable for carrying heavy and bulky material. It is a fuel-efficient and ecofriendly mode of transport. The water transport is of two types-(a) inland waterways, and (b) oceanic waterways.

Inland Waterways: It was the chief mode of transport before the advent of railways. It, however, faced tough competition from road and railway transport. Moreover, diversion of river water for irrigation purposes made them non navigable in large parts of their courses. India has 14,500 km of navigable waterways, contributing about 1% to the country’s transportation. It comprises rivers, canals, backwaters, creeks, etc. At present, 3,700 km of major rivers are navigable by mechanized flat bottom vessels, out of which only 2,000 km are actually used. Similarly, out of 4,300 km of the network of navigable canal, only 900 km is navigable by mechanized vessels.

For the development, maintenance and regulation of national waterways in the country, the Inland Waterways Authority was set up in 1986. The authority has declared three inland waterways as National Waterways as given in the table.

Inland Waterways Authority has also identified ten other inland waterways, which could be upgraded. The backwaters (Kadal) of Kerala has special significance in Inland Waterway. Apart from providing cheap means of transport, they are also attracting large number of tourists in Kerala. The famous Nehru Trophy Boat Race (VALLANKALI) is also held in the backwaters.

Oceanic Routes: India has a vast coastline of approximate 7,517 km, including islands. Twelve major and 185 minor ports provide infrastructural support to these routes. Oceanic routes play an important role in the transport sector of India’s economy. Approximately 95 per cent of India’s foreign trade by volume and 70 per cent by value moves through ocean routes. Apart from international trade, these also used for the purpose of transportation between the islands and the rest of the country.

Air Transport is the fastest means of movement from one place to the other. It has reduced distances by minimizing the travel time. It is very essential for a vast country like India, where distances are large and the terrain and climatic conditions are diverse.

Air transport in India made a beginning in 1911 when airmail operation commenced over a little distance of 10 km between Allahabad and Naini. But its real development took place in post-Independent period. The Airport Authority of India is responsible for providing safe, efficient air traffic and aeronautical communication services in the Indian Air Space. The authority manages 126 airports including 11 international, 86 domestic and 29 civil enclaves at defence air fields.

The air transport in India is managed by two corporations, Air India and Indian Airlines after nationalization. Now many private companies have also started passenger services.

Oil and Gas Pipelines: Pipelines are the most convenient and efficient mode of transporting liquids and gasses over long distances. Even solids can also be transported by pipelines after converting them into slurry. Oil India Limited (OIL) under the administrative set up of the Ministry of Petroleum and Natural Gas is engaged in the exploration, production and transportation of crude oil and natural gas. It was incorporated in 1959 as a company. Asia’s first cross country pipeline covering a distance of 1,157 km was constructed by OIL from Naharkatiya oilfield in Assam to Barauni refinery to Bihar. It was further extended up to Kanpur in 1966. Another extensive network of pipeline has been constructed in the western region of India of which Ankleshwar-Koyali, Mumbai High- Koyali and Hazira-Vijapur-Jagdishpur (HVJ) are most important. Recently, a 1256 km long pipeline connecting Salaya (Gujarat) with Mathura (U.P.) has been constructed. It supplies crude oil from Gujarat to Punjab (Jalandhar) via Mathura. OIL is in the process of constructing of 660 km long pipeline from Numaligarh to Siliguri.

Personal Communication System: Among all the personal communication system internet is the most effective and advanced one. It is widely used in urban areas. It enables the user to establish direct contact through e-mail to get access to the world of knowledge and information. It is increasingly used for e-commerce and carrying out money transactions. The internet is like a huge central warehouse of data, with detailed information on various items. The network through internet and e-mail provides an efficient access to information at a comparatively low cost. It enables us with the basic facilities of direct communication.