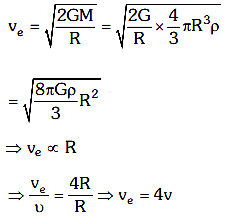 Q.6. If the mass of the Sun were ten times smaller and the universal gravitational constant were ten time larger in magnitude, which of the following is not correct ?   [2018]A: Raindrops will fall fasterB: Walking on the ground would become more difficultC: Time period of a simple pendulum on the Earth would decreaseD: 'g' on the Earth will not changeAns: DSolution:

Raindrops will fall faster, Walking on the ground would become more difficult. Time period of a simple pendulum on the earth would decrease.Q.7. The acceleration due to gravity at a height 1 km above the earth is the same as at a depth d below the surface of earth. Then:-    [2017]A: d = 1 kmB: 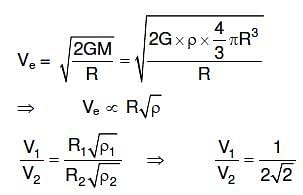 So the answer is option 3Q.11. Kepler's third law states that square of period of revolution (T) of a planet around the sun, is proportional to third power of average distance r between sun and planet i.e. T2 = Kr3. here K is constant.If the masses of sun and planet are M and m respectively then as per Newton?s law of gravitation force of attraction between them is F= GMm/r2 , here G is gravitational constant. The relation between G and K is described as :     [2015]A: K=1/GB: GK4π2C: GMK=4π2D: K=GAns: CSolution:

Q.12. Two spherical bodies of mass M and 5 M and radii R and 2 R are released in free space with initial separation between their centres equal to 12 R. If they attract each other due to gravitational force only, then the distance covered by the smaller body before collision is :    [2015]A: 1.5 RB: 2.5 RC: 4.5 RD: 7.5 RAns: DSolution: 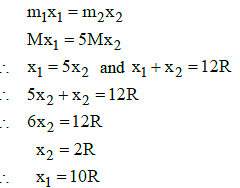 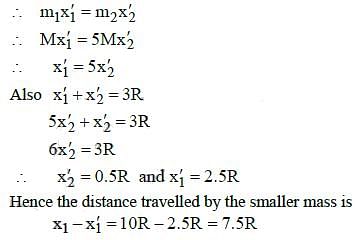 Q.13. Dependence of intensity of gravitational field (E) of earth with distance (r) from centre of earth is correctly represented by:    [2014]A: