Q.1. Read the following statements on lipids and find out correct set of statements:  (2022)(A) Lecithin found in the plasma membrane is a glycolipid (B) Saturated fatty acids possess one or more c = c bonds (C) Gingely oil has lower melting point, hence remains as oil in winter (D) Lipids are generally insoluble in water but soluble in some organic solvents (E) When fatty acid is esterified with gIycerol, monoglycerides are formed Choose the correct answer from the options given below: (a) (A), (D) and (E) only (b) (C), (D) and (E) only (c) (A), (B) and (D) only (d) (A), (B) and (C) onlyAns. (b)Solution. (i) Lecithin found in plasma membrane is a phospholipid not glycolipid.(ii) Saturated fatty acids do not possess c = c bonds.

Q.3. Statements related to human Insulin are given below: Which statement(s) is/are correct about genetically engineered Insulin?  (2022)(A) Pro-hormone insulin contain extra stretch of C-peptide. (B) A-peptide and B-peptide chains of insulin were produced separately in E. coli, extracted and combined by creating disulphide bond between them. (C) Insulin used for treating Diabetes was extracted from cattle and pigs. (D) Pro-hormone Insulin needs to be processed for converting into a mature and functional hormone. (e) Some patients develop allergic reactions to the foreign insulin. Choose the most appropriate answer from the options given below. (a) (B) only (b) (C) and (D) only (c) (C), (D) and (E) only (d) (A), (B) and (D) onlyAns. (a)Solution. In the year 1983, the American company Eli Lilly prepared two DNA sequences corresponding to A and B, chains of human insulin and introduced them in plasmids of E. coli to produce insulin chains. Chains A and B were produced separately, extracted and combined by creating disulfide bonds to form human insulin. 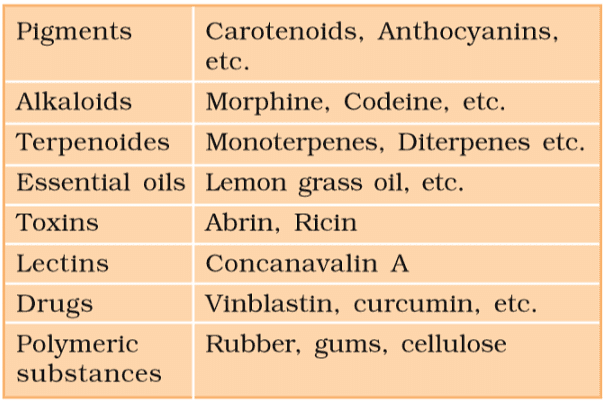 Q.8. Following are the statements with reference to 'lipids'.  (2021)(a) Lipids having only single bonds are called unsaturated fatty acids.(b) Lecithin is a phospholipid.(c) Trihydroxy propane is glycerol.(d) Palmitic acid has 20 carbon atoms including carboxyl carbon.(e) Arachidonic acid has 16 carbon atoms.Choose the correct answer from the options given below.(a) (b) and (c) only(b) (b) and (e) only(c) (a) and (b) only(d) (c) and (d) onlyAns. (a)Solution.

Q.9. Identify the basic amino acid from the following     (2020)(a) Lysine(b) Valine(c) Tyrosine(d) Glutamic acid Ans. (a)Solution.Lysine is the basic amino acid. Valine is neutral amino acid. Tyrosine is aromatic amino acid. Glutamic acid is acidic amino acid.Q.10. Floridean starch has structure similar to:     (2020)(a) Mannitol and algin(b) Laminarin and cellulose(c) Starch and cellulose(d) Amylopectin and glycogenAns. (d)Solution.Floridean starch is the storage substance found in red algae (Rhodophyta). The structure of this compound is similar to amylopectin and glycogen.Q.11. Which of the following statements is correct?     (2020)(a) Adenine pairs with thymine through three H-bonds.(b) Adenine does not pair with thymine.(c) Adenine pairs with thymine through two H-bonds.(d) Adenine pairs with thymine through one H-bond.Ans. (c)Solution.Adenine pairs with thymine in DNA through two hydrogen bonds.Q.12. Indentify the substances having glycosidic bond and peptide bond, respectively in their structure.     (2020)(a) Cellulose, lecithin(b) Inulin, Insulin(c) Chitin, cholesterol(d) Glycerol, trypsinAns. (b)Solution.Inulin is a polysaccharide have glycosidic bond, insulin is a polypeptide which is composed of two peptide chains.Q.13. Which one of the following is the most abundant protein in the animals?     (2020)(a) Lectin(b) Insulin(c) Haemoglobin(d) CollagenAns. (d)Solution.Collagen is the most abundant protein in animal world and Ribulose bisphosphate Carboxylase-Oxygenase (RUBISCO) is the most abundant protein in the whole of the biosphere. 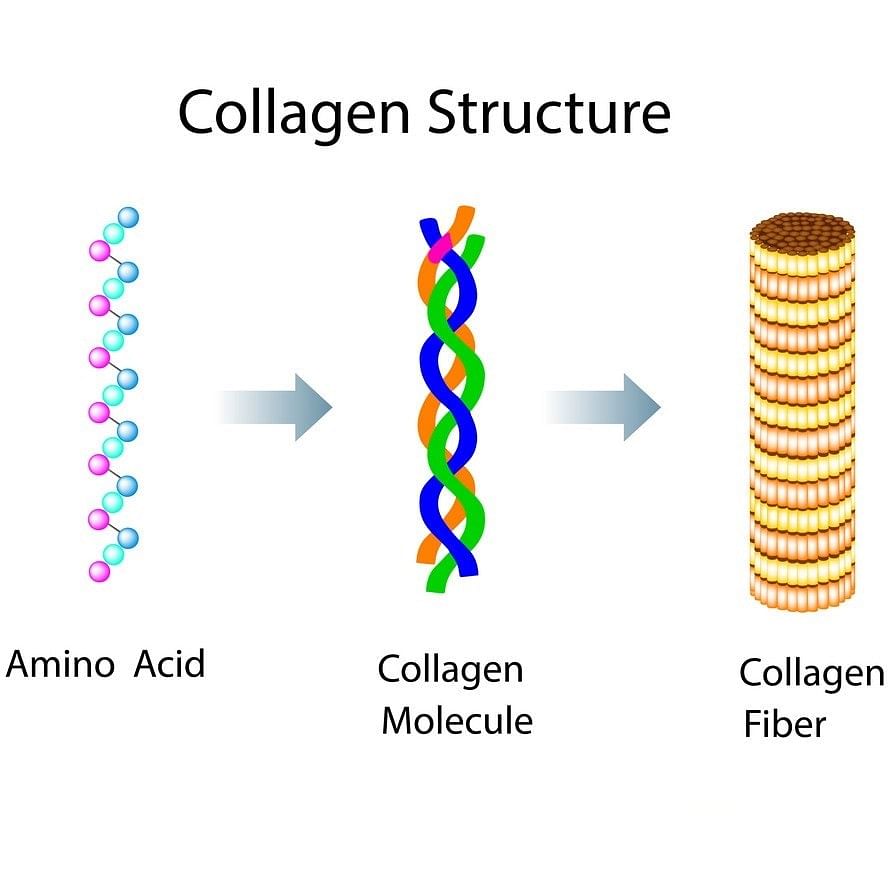 Insulin is the hormone that helps in controlling the level of sugar(glucose) in the blood. Haemoglobin is the iron bound protein molecule (pigment) in the blood that helps to transport oxygen.Q.14. Which of the following glucose transporters is insulin-dependent?    (2019)(a) GLUT IV(b) GLUT I(c) GLUT II(d) GLUT IIIAns. (a)Solution.GLUT stands for glucose transport protein channel. They are of different types. Glucose transporter type 4 (GLUT IV) is a protein encoded in humans by the SLC2A4 gene. It is insulin-regulated glucose transporter found primarily in adipose tissues and striated muscles.Q.15. Concanavalin A is    (2019)(a) A pigment(b) An alkaloid(c) An essential oil(d) A lectinAns. (d)Solution.Concanavalin A, a lectin is a secondary metabolite, which has no direct function in growth and development of plants, rather are found at particular stages of development.Q.16. Consider the following statements.(A) Coenzyme or metal ion that is tightly bound to enzyme protein is called prosthetic group.(B) A complete catalytic active enzyme with its bound prosthetic group is called apoenzyme.Select the correct option.    (2019)(a) (A) is false but (B) is true.(b) Both (A) and (B) are true.(c) (A) is true but (B) is false.(d) Both (A) and (B) are false.Ans. (d)Solution.Enzymes could be simple or conjugated (holoenzyme). Conjugated enzymes are formed of two parts - a protein part called apoenzyme and a non-protein part named co-factor. Co-factors are bound to the enzyme to make it catalytically active. There are three types of cofactors : prosthetic groups, co-enzymes and metal ions.Prosthetic groups are organic compounds and are distinguished from other cofactors in which they are tightly bound to the apoenzyme. Co-enzymes are organic compounds but their association with the apoenzyme is only transient, occurring during the course of catalysis. A number of enzymes require metal ions for their activity which form coordination one or more coordination bonds with the substrate.Q.17. "Ramachandran plot" is used to confirm the structure of    (2019)(a) RNA(b) proteins(c) triacylglycerides(d) DNAAns. (b)Q.18. Prosthetic groups differ from co-enzymes in that    (2019)(a) They require metal ions for their activity(b) They (prosthetic groups) are tightly bound to apoenzymes(c) Their association with apoenzymes is transient(d) They can serve as co-factors in a number of enzyme-catalyzed reactionsAns. (b)Q.19. The two functional groups characteristic of sugars are    (2018)(a) Hydroxyl and methyl(b) Carbonyl and methyl(c) Carbonyl and phosphate(d) Carbonyl and hydroxylAns. (d)Solution.Carbohydrates (commonly called sugars) are chemically defined as polyhydroxy aldehyde or ketones. All sugar molecules have one carbonyl group (-CO-) in addition to hydroxyl group (OH) on other carbon atoms.Q.20. Which of the following statements is correct with reference to enzymes?    (2017)(a) Holoenzyme = Apoenzyme + Coenzyme(b) Coenzyme - Apoenzyme + Holoenzyme(c) Holoenzyme = Coenzyme + Co-factor(d) Apoenzyme = Holoenzyme + CoenzymeAns. (a)Solution.Holoenzyme is the complete conjugate enzyme consisting of an apoenzyme and a cofactor. Cofactor may be organic or inorganic in nature. Organic cofactors are of two types-coenzyme and prosthetic group.Q.21. Which of the following are not polymeric?    (2017)(a) Proteins(b) Polysaccharides(c) Lipids(d) Nucleic acidsAns. (c)Solution.Lipids are fatty acids esters of alcohols and related substances. Polysaccharides are polymers of monosaccharides. Proteins are polymers of amino acids and nucleic acids are polymer of nucleotides.Q.22 A non-proteinaceous enzyme is    (2016)(a) Lysozyme(b) Ribozyme(c) Ligase(d) DeoxyribonucleaseAns. (b)Solution.A ribozyme is a ribonucleic acid (RNA) enzyme that catalyses a chemical reaction in a similar way to that of a protein enzyme. These are found in ribosomes and are also called catalytic RNAs.Q.23. Which of the following is the least likely to be involved in stabilising the three-dimensional folding of most proteins?    (2016)(a) Hydrogen bonds(b) Electrostatic interaction(c) Hydrophobic interaction(d) Ester bondsAns. (d)Solution.Tertiary structure or three dimensional structure of protein is stabilised by several types of bonds-hydrogen bonds, ionic bonds, van der Waal's interactions, covalent bonds and hydrophobic bonds.Q.24. Which of the following describes the given graph correctly?    (2016)

The document NEET Previous Year Questions (2016-22): Biomolecules Notes | Study Biology Class 11 - NEET is a part of the NEET Course Biology Class 11.
All you need of NEET at this link: NEET
Join Course