According to this law, if the temperature T of the body is not very different from that of the surroundings T0, then rate of cooling -  is proportional to the temperature difference between them. To prove it let us assume that

if the temperature difference is small.

8.1 Variation of temperature of a body according to Newton's law

Here  is a constant

From this expression we see that q = qi at t = 0 and q = q0 at t = ¥, i.e., temperature of the body varies exponentially with time from qi to q0 (< qi). The temperature versus time graph is a shown in figure. 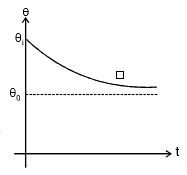 Note : If the body cools by radiation from q1 to q2 in time t, then taking the approximation

This form of the law helps in solving numerical problems related to Newton's law of cooling.

8.2 Limitations of Newton's Law of Cooling :

(b) The loss of heat from the body should be radiation only.

(c) The temperature of surroundings must remain constant during the cooling of the body.

Ex.20 A body at temperature 40°C is kept in a surrounding of constant temperature 20°C. It is observed that its temperature falls to 35°C in 10 minutes. Find how much more time will it take for the body to attain a temperature of 30°C.

Alter: (by approximate method)for the interval in which temperature falls from 40 to 35°C

From the energy distribution curve of black body radiation, the following conclusions can be drawn :

(a) The higher the temperature of a body, the higher is the area under the curve i.e. more amount of energy is emitted by the body at higher temperature.

(c) For a given temperature, there is a particular wavelength (lm) for which the energy emitted (El) is maximum

(d)  With an increase in the temperature of the black body, the maxima of the curves shift towards shorter wavelengths.

From the study of energy distribution of black body radiation discussed as above, it was established experimentally that the wavelength (lm) corresponding to maximum intensity of emission decreases inversely with increase in the temperature of the black body. i.e.

This is called Wien's displacement law.

The document Newton's Law of Cooling Notes | Study Physics For JEE - JEE is a part of the JEE Course Physics For JEE.
All you need of JEE at this link: JEE
Join Course