(i) Origin- from the story of Siddhartha (Buddha) in the Indian subcontinent(ii) Has now spread to large parts of Southeast Asia.(iii) World’s fourth-largest religion after Christianity, Islam & Hinduism.(iv) 7% of the world’s population embraces it.(v) Buddhists- 0.7% of India’s population, or 8.4 million individuals, with the majority(vi) being in Maharashtra.

(i) Born at Lumbini (in present Nepal) in 563 BC as Siddhartha Gautam(ii) Mother- Maya & father King Suddhodana of Sakyan kingdom under Kshatriya clan.(iii) Was born on Vaishakhi Purnima.(iv) Was married to Princess Yashodhara & had a son named Rahul.(v) At 29, left home with horse Kanthaka & charioteer Channa-> wandered as an ascetic for 6 years-^ went to Gaya (Bihar) & sat under a pipal tree, where he freed himself from all attachments & discovered the truth, the secret of happiness.(vi) At 35- on his birthday, he attained enlightenment (Nirvana) under that pipal tree & became Buddha, the Enlightened One.(vii) After attaining Nirvana in Bodh Gaya, his first sermon to his five companions was at Deer Park in Sarnath near Varanasi.(viii) This event was called Dharma-chakra-pravartana (Turning the Wheel of Law).(ix) The Three Jewels (Triratna) embraced under Buddhism are:

(x) Sangha (the Order) was initiated by Buddha at the time of giving the first sermon.(xi) These 5 companions along with Buddha became Sangha (a group).(xii) Buddha attained Mahaparinirvana at Kushinagar (Malla Mahajanapada) in UP at 80 in 483 BC.(xiii) Said to be contemporary of King Bimbisara, for a major part of his life & for last few years to Ajatashatru of Haryanka Dynasty(xiv) He is known for Buddhist texts- Tathagata & Sakyamuni.(xv) Predecessor of Buddha under Buddhism- Kassapa Buddha & his successor will be Maitreya.

Concepts and Philosophy under

(ii) Desires cause sorrows, which keeps us caught in samsara, the endless cycle of repeated rebirth, dukkha, and dying again.

(iv) Middle Path (Madhyam Marg) or Middle Way- describes the character of the Noble Eightfold Path that leads to liberation.

(v) Buddhism rejects the authenticity of the Vedas and the concept of the existence of Soul (atman) unlike Jainism.

(vi) After Buddha attained Mahaparinirvana at Kushinagar in 483 BC, his teachings were compiled by four Buddhist Councils in the next 500 years to collate this material into Pitakas.

(xi) In Theravada the ultimate goal is the cessation of kleshas & attainment of Nirvana, by practicing Noble Eightfold Path.

(xii) Mahayana- aspires for Buddhahood via the bodhisattva path, a state wherein one remains in a cycle of rebirth.

(i) It means the lesser vehicle.(ii) Includes followers of the original preaching of Buddha.(iii) Orthodox school.(iv) Did not believe in idol or image worship of Buddha but believed in individual salvation through self-discipline & meditation.(v) Ultimate aim- nirvana.(vi) Sub-sects: Sthaviravada or Theravada.(vii) Its scholars used Pali language.(viii) Emperor Ashoka patronized this school.(ix) Is almost non-existent in the present age.

(i) Bodhisattva- generated Bodhicitta (a spontaneous wish & a compassionate mind) to attain Buddhahood.

(ii) Believes in Universal liberation & is a concept under Mahayana Buddhism.

(iii) Jataka tales contemplate that Buddha was Bodhisattva, in his previous births.

(iv) Theravada Buddhism- a person whose aim is to become fully enlightened is still subject to birth, illness, death, sorrow, defilement, and delusion.

(e) Ksitigarbha: Buddhist monk & vowed not to Buddhahood till the hell is emptied,

(i) Vasudhara: associated with wealth, prosperity & abundance. Popular in Nepal,

(k) Sitatapatra: A protector against supernatural danger & worshipped in both Mahayana and Vajrayana.

(i) School of elder monks.(ii) Uses Buddha’s teaching preserved in Pali.(iii) Canon (only existing complete Buddhist canon) as its doctrinal core.(iv) Ultimate goal- cessation of kleshas & attainment of Nirvana,(v) Kleshas include- states of mind such as anxiety, fear, anger, jealousy, desire, depression, etc.(vi) Samatha (calming of mind) & Vipassana (insight into three marks of existence: impermanence, suffering, & realization of non-self.)- an integral part of Noble Eightfold Path.(vii) Believes in the concept of vibhajjavada i.e., “teaching of analysis”.(viii) Visuddhimagga (Path of Purification)- a treatise on Theravada Buddhist school (by Buddhaghosa in 5th Century AD in Sri Lanka).(ix) Seven stages of purification (satta-vishuddhi) to be followed under it.(x) Pali- sacred language of Theravada.(xi) Successor of Hinayana.(xii) 35.8% of Buddhists in the world belong to it.(xiii) Followed in Sri Lanka, Cambodia, Laos, Thailand, Myanmar, etc.

(i) Developed as a result of royal courts sponsoring Buddhism & Shaivism., i.e. influenced by Hinduism.(ii) Main deity- Tara (a lady)(iii) Combines Brahmanical (Veda-based) rituals with Buddhist philosophies.(iv) Based on Mahayana Buddhist philosophy.(v) Believes in Tantra’s, Mantras & Yantras.(vi) According to this school, the mantra is an easy path to achieving Buddhahood as compared to Mahayana.(vii) 5.7 % of the world's Buddhist population follows it.(viii) Followed in Tibet, Bhutan, Mongolia, Kalmykia, etc.

(i) ‘Jain’- derived from jina or Jaina meaning ‘Conqueror’.(ii) Believe that their religion is comprised of people who have managed to control & conquer their desires.(iii) Has no founder, instead believes in the teacher who shows the way or a Tirthankara.(iv) 23 Tirthankaras or great-learned men in Jain religion before Mahavira.(v) Mahavira- last & 24th tirthankara.(vi) Like Buddhism, rejects the authority of Vedas.(vii) Unlike Buddhism, it believes in the existence of the soul (atman) as the core & fundamental focus of Jain philosophy.(viii) Major Jain pilgrimages- Dilwara temple, Mount Abu (Rajasthan), Palitana temples (Gujarat), Girnar (Gujarat), Shikharji (Jharkhand), and Shravanabelagola (Karnataka).(ix) The 24 Tirthankaras under Jainism are Rishabhanatha or Adinatha, Ajita, Sambhava, Abhinandana, Sumati, Padmaprabha, Suparshva, Chandraprabha, Suvidhi, Shital, Shreyansa, Vasupujya, Vimala, Ananta, Dharma, Shanti, Kunthu, Ara, Malli, Muni Suvrata, Nami, Nemi, Parshvanatha & Mahavira.

(i) Around 540 BC, Prince Vardhamana was born at Kundalgram in Vaishali to King Siddhartha & Queen Trishala, who ruled the Jnatrika clan.(ii) At 30 → touching journey → to live the like an ascetic → 10th day of Vaishakha, reached Pava near Patna where he found the truth of life (Kevalya)(iii) Title ‘Mahavira’ or the great hero was given.(iv) Other titles- jaina or jitendriya (one who conquers all his senses) & nirgrantha (one who is free from all bonds).

(i) Mahavira taught- the right path or Dharma & stressed renunciation of the world, strict asceticism & moral cultivation.(ii) Jains- live in such a way so as to not harm any being.(iii)  Anekantavada- the fundamental doctrine of Jainism emphasizes that ultimate truth & reality is complex, and has multiple aspects.(iv) Hence, non-absolutism, which means no single, specific statement can describe the nature of existence and absolute truth.(v) Believe in a three-jewel (fold) path of right belief (samyak darshan), right knowledge (samyak jnana), and right conduct (samyak charita).(vi) Jains follow these five constraints: 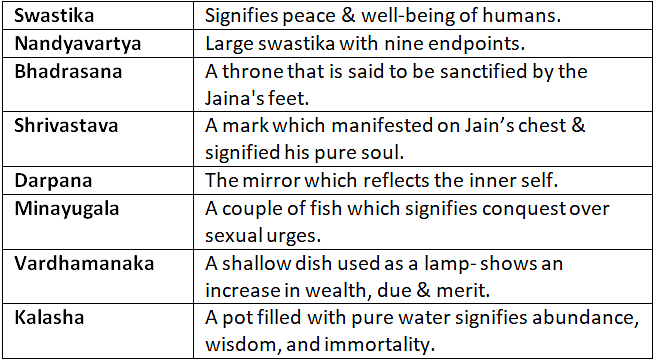 Digambara School:(i) Monks do not wear clothes as this sect believes in complete nudity.(ii) Female monks wear unstitched plain white sarees & are_called Aryikas.(iii) Follow all the five constraints (Ahirnsa, Satya, Asteya, Aparigraha, and Brahmacharya) as per the teachings of Mahavira, unlike Svetambaras.(iv) Bhadrabahu (exponent of Digambara)- moved to Karnataka along with his disciples after predicting a long famine.(v) Earliest record of Digambara beliefs- Prakrit Suttapahuda of Kundakunda.(vi) Believe that women can’t be Tirthankaras & that Malli was a man.(vii) Monasticism rules are more rigid under it.

Svetambara School:(i) Follow preachings of Prasvanatha, i.e. believe in only four restraints (except Brahmacharya) to be followed to attain Kevalya.(ii) Svetambara believes that the 23rd and 24th Tirthankara did marry, unlike thought by Digambara.(iii) Sthulabhadra- great exponent of this school & stayed in Magadha, unlike Bhadrabahu who went to Karnataka.(iv) Monks- simple white clothing, a begging bowl, a brush to remove insects from their path, books & writing materials.(v) Believe Tirthankaras can be men or women, and say that Malli began her life as a princess.(vi) Indicates five eternal substances in existence: Soul (jiva), Matter (pudgala), Space (akasha), motion (Dharma), and rest (Adharma), unlike Digambaras which add the sixth eternal substance as time (Kala).

Svetambara School: Three sub-sects:(a) Sthanakavasi: pray to Saints rather than to idol; Saints wear muhapatti near their mouth to cover it, unlike Murtipujaka.(b) Murtipujaka (Dcravasi): keep idols of Tirthankaras in temples; saints do not wear a muhapatti.(c) Terapanthi: Pray to saints rather than to an idol like Sthanakavasi. Saints wear a Muhapatti.