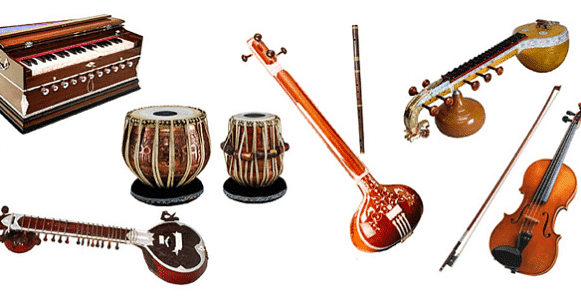 Try yourself:Consider the following statements :
1. Raga forms the basis of Rhythm.
2. Tala becomes the basis of melody.
Which of the above is/are correct?
Explanation

Statement 1 is incorrect - Rhythm as the time structure of music is composed of distinct temporal components such as pattern, meter, and tempo.
Statement 2 is incorrect - Tala or (“clap”) in the music of India a metric cycle with a specific number of beats—from 3 to 128—that recur in the same pattern throughout a musical performance. Tala, is best described as time measure and it does not become the basis of melody.

Try yourself:Consider the following statements:
1. There are five swaras or notes in total in Indian music.
2. Odava raga contains five notes or swaras.
Which of the above is/are correct?
Explanation

Statement 1 is incorrect - Indian music also has an octave divided into twelve notes. These twelve notes are called swaras; they are not tuned like the notes of the chromatic scale
Statement 2 is correct - Rāgas are placed in three categories:

Sampoorna or heptatonic, a composition of seven notes

Other Components of the Raga

(b) Composition: Divided into two parts in Hindustani classical music:

(c) Taan: Basic notes m a fast tempo; are very technical & speed is an important factor in singing them.

(d) Alankara: Specific melodic presentation in succession in which a pattern is followed.Example In combination of notes ‘Sa re ga’, ‘ga ma pa’, ‘ma pa dha’, etc. In these combinations we see an alankar in which 3 notes in succession are used each time. 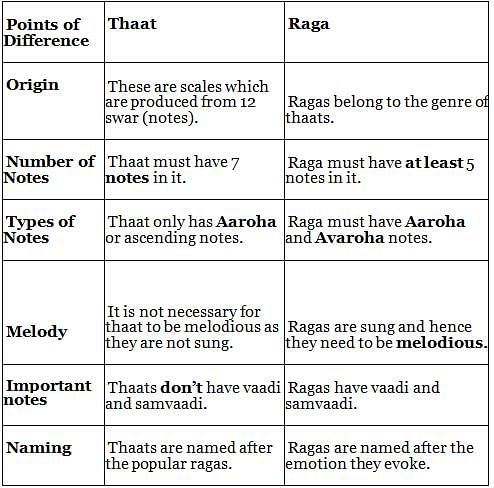 Try yourself:Which of the following is not among the nine rasas or emotional responses?
Explanation

Dhrupad singing divided into four forms on the basis of vanis or banis that they perform:(a) Dagari Gharana

Statement 1 is incorrect and 2 statement is correct
It translates to 'face' and aptly so, it introduces the song and sets the tone. Antara is the second paragraph, the one after the mukhda. It is a continuation of the song after where the mukhda has left off. The song can start with an Antara too, and one song can have more than one Antara.

The major Gharanas under Khyal music are:

Every composition in the Carnatic style has several parts to it: 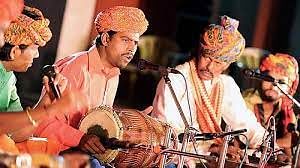 There are several type of folk music associated with a particular State:

Fusion of Classical and Folk

Usually devotional music take elements from both classical and folk.

Some of the styles are:

Sub-categories in this genre are as follows:

Musical InstrumentsFour major traditional categories of musical instruments depending upon type of instruments that are included in it. They are:

Sound is drawn from drawing a bow across the strings.

Strings are plucked by fingers or by a plectrum of wire or horn.

(c) Instruments struck by small hammer or a pair of sticks.

It is a 100 strings instrument and is a traditional instrument of Jammu and Kashmir from ancient times. Sufiana kalam music is accompanied by Santoor.

Try yourself:Which of the following folk music is not correctly matched?
Explanation

Alha Folk song is famous in Bundelkhand region of Madhya Pradesh. Alha and Udal were successful commanders of Rajput king Chandel king Parmal. The song is sung in glory of them.

(i) Tumbi: played during Bhangra in Punjab.

(v) Dilruba or Esraj: accompanying instrument used in Punjab and during Rabindra sangeet in eastern India.

(vi) Onavillu: Kerala. Made of bamboo.

(vii) Sarinda: Important tribal instrument and is used by Santhals in Eastern India, in Rajasthan & Assam. It is like Sarangi.

2. Aerophones(i) Pungi or Been: snake charmers use it. Made of dried bottle gourd & two bamboo sticks.(ii) Algoza: Double flute and used in North West India, especially Punjab.(iii) Tangmuri: Khasi hill people of Meghalaya.(iv) Titti: like bagpiper, made of goat skin. It is made in south India especially Kerala and Andhra Pradesh.(v) Mashak: instrument of Garhwal region in Uttarakhand. Used in Rajasthan and Uttar Pradesh.(vi) Gogona: made of bamboo & used during Bihu in Assam.

3. Membranophones(i) Ghumot: like a drum & played during Ganesh festival,Goa.(ii) Idakka: like Damru and is from Kerala.(iii) Udukai: hour-glass shaped instrument like damru from Tamil Nadu.(iv) Sambal: like drum & played with sticks in Konkan region, Maharashtra.(v) Tamak: Important instrument of Santhal tribe & is two headed drum. It is beaten with drum sticks.(vi) Diggi: folk drum from Ghariya village of Uttar Pradesh.

Try yourself:Which of the following is not a Sushir vadya?
Explanation

SUSHIR VADYA. These are wind instruments. Sound is produced primarily by causing a body of air to vibrate. The Jal Tarang is a melodic percussion instrument which originates from the Indian subcontinent. It consists of a set of ceramic or metal bowls filled with water. The bowls are played by striking the edge with beaters, one in each hand.

Some of the important developments are:

Pandit Vishnu Digambar Paluskar (18 August 1872 – 21 August 1931) was a Hindustani musician. Gharana is related to Carnatic music. So both 1 and 2 are answers.

Try yourself:Consider the following statements:
1. A raga must have at least five notes or swaras in it.
2. Raga has only Aaroha or ascending notes.
Which of the above is/are correct?
Explanation

Statement 1 is correct - As prescribed in the ancient texts on Hindustani classical music, each raga must consist of at least five notes. The notes should include the tonic (Sa) and at least one out of (Ma) or (Pa). In a broad sense, a raga can be defined by its characteristic ascent and descent (known as Aroha and Avroha respectively).
Statement 2 is incorrect - Thaat has only Aaroha (Ascending notes). The raag must have Aaroha (ascending notes) as well as the Avaroha (descending notes). A thaat doesn’t need to be melodious as the thaats are not sung but the raag has to be melodious. Thaats do not express a sentiment. 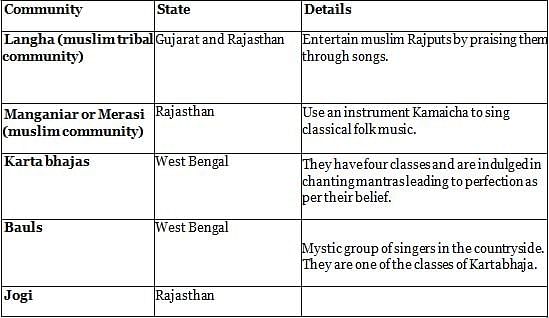 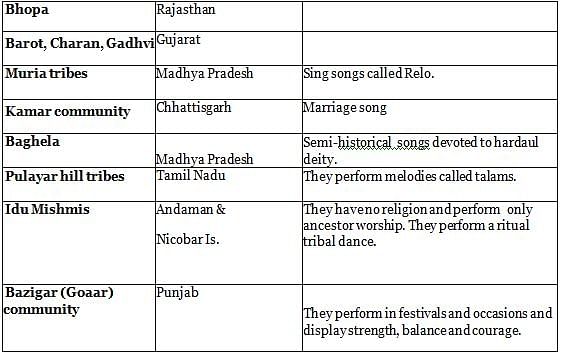 To practice questions of the topic "Indian Music", you just read, attempt the test given below: