Introduction(i) Martial art- literally means ‘arts associated with waging of war’.(ii) Some art forms were banned during the British rule, including Kalaripayattu and Silambam, but they resurfaced and gained popularity post independence.(iii) Popular & prevalent martial arts in India:Kalaripayattu(i) One of the oldest martial arts in India(ii) Practiced in most parts of southern India(iii) Originated in Kerala in 4th century A. D.(iv) Kalari, a Malayalam word, refers to specific type of school/gymnasium/training hall where martial arts are practiced or taught.(v) Sage Parasurama- built temples & introduced martial arts & started Kalaripayattu.(vi) Includes mock duels (armed & unarmed combat) and physical exercises.(vii) Not accompanied by any drumming or song.(viii) Most important aspect- style of fighting.(ix) Its most important key is footwork & includes kicks, strikes and weapon-based practice.(x) Women also practice this art.(xi) Unniyarcha, a legendary heroine, won many battles using this martial art.(xii) It is used as a means of unarmed self-defence but is also a way to achieve physical fitness today.(xiii) It includes a number of techniques & aspects like Uzhichil or massage with Gingli oil, Fighting with Otta (an ‘S’ shaped stick), Maipayattu or body exercises, Puliyankam or sword fight, Verumkai or bare-handed fight, AngaThari or use of metal weapons and sticks of Kolthari.Silambam(i) A kind of staff fencing, is modern & scientific martial art of Tamil Nadu.(ii) Kings who ruled Tamil Nadu, including Pandya, Chola and Chera, promoted it during their reign.(iii) Tamil literature known as Silappadikaram (second century A.D)- makes reference to sale of silambam staves, pearls, swords and armour to foreign traders.(iv) Silambam bamboo staff - one of the most popular trading items with traders & visitors from Rome, Greece and Egypt.(v) Long-staff - used for both mock fighting & self-defence.(vi) Highly organized & popular games of the state since first century A.D.(vii) Its origin can be traced to divine sources, like Lord Murugan (in Tamil mythology) & sage Agastya are credited with its creation.(viii) During Vedic age, training was imparted to young men as a ritual & for an emergency.(ix) From a pure defense art, Silambam has transformed into a combat exercise.(x) Four different kinds of staves used → first ‘torch silambam’- has lighted balls of cloth at one end of the staff, second produces a sonorous swishing sound, third is a nonelastic staff that gives clattering sounds & fourth is quite short yet powerful staff.(xi) players wear langots of different colors, turbans, sleeveless vests, canvas shoes, & chest guard and use wickerwork shields.(xii)  Kinds of techniques used- swift movements of foot, use of both hands to wield staff, use of thrust, cut, chop and sweep to achieve mastery and development of force, momentum and precision at different levels of body (head, shoulder, hip and leg level).(xiii) Three ways to win → first involves dispossessing a player of his staff; second- counting of number of ‘touches’; third by judging skill shown by each contestant in protecting money pouch that is either kept at or between contestant’s feet.Thang-ta and Sarit Sarak(i) Created by Meitei people of Manipur(ii) Armed martial art that finds its mention in most lethal combat forms.(iii) Sarit Sarak- unarmed art(iv) Their history- 17th century- used by Manipuri kings to fight British    for quite sometime.(v) Thang refers to a ‘sword’, while Ta refers to a ‘spear’, so sword & spear are two main elements of Thang-ta.(vi) Two components thang-ta & sarit sarak- together called Huyen Langlon.(vii) This ancient martial art uses other weapons including axe & shield.(viii) Practiced in three different ways → first completely ritualistic in nature, linked with tantric practices; second mesmerising performance of spear & sword dances; third involves actual techniques of fighting.(ix) Sarit Sarak- when compared to any other existing art form of same school, it is quite flawless for its offensive and evasive action.Cheibi Gad-ga(i) Most ancient martial arts of Manipur(ii) Involves fighting using a sword & a shield.(iii) Now modified to a stick encased in soft leather in place of a sword & leathershield.(iv) Contest takes place in a circle of 7 metre diameter, on a flat surface.(v) Within circle, there are two lines, 2 metre apart.(vi) ‘Cheibi’ stick is between 2 to 2.5 feet in length, while shield is around 1 metre in diameter.(vii) Points are given based on skills and brute force.

Try yourself:Consider the following Martial Arts of India:
1. Kalaripayattu
2. Silambam
3. Gatka
Which of the above were banned during the British rule?
Explanation

Some of the art forms were banned during British rule, including Kalaripayattu and Silambam, but they resurfaced and gained popularity post-independence.
Kalaripayattu

Pari-khanda(i) Created by Rajputs, is a form of martial art from Bihar.(ii) Involves fighting using sword & shield.(iii) Still practiced in many parts of Bihar.(iv) Its steps & techniques are widely used in Chhau dance.(v) ‘Pari’ means shield while ‘khanda’ means sword.

Try yourself:Which of the following martial arts finds its mention in the Sangam literature?
Explanation

First mentioned in Sangam literature (first or second century B.C.), Kuttu Varisai translates to ‘empty hand combat’. Kuttu Varisai is mainly practiced in Tamil Nadu, although it is quite popular in north-eastern part of Sri Lanka and Malaysia too.

Thoda(i) Originated in Himachal Pradesh(ii) Is a mixture of martial arts, sport & culture.(iii) Takes place during Baisakhi (13th & 14 th April) every year.(iv) Community prayers arc done so to invoke blessings of Goddesses Mashoo & Durga.(v) Quite popular in various parts of State including Narkanda block, Theong division (Shimla district), Chopal division, Solan and Sirmaur district.(vi) Martial art relies on a player’s skill of archery.(vii) It can be dated back to Mahabharata when bows and arrows were used in epic battle, in valleys of Kullu & Manali.(viii) It finds its genesis in Kullu.(ix) Name is derived from round wooden piece attached to head of an arrow to minimise its lethal potential. Equipment required- wooden bows & arrows.(x) In game, there are two groups of 500 people each.(xi) Game is played in a marked court so as to ensure a certain degree    of discipline.(xii) Two teams are called Pashis & Saathis, who are believed to be descendants of Pandavas & Kauravas of Mahabharata.(xiii) Archers aim for leg, below knee, as there are negative points for striking any other parts of body.Gatka(i) Weapon based martial art form,(ii) Performed by Sikhs of Punjab.(iii) ‘Gatka’ refers to one whose freedom belongs to grace.(iv) Word ‘Gatka’ comes from a Sanskrit word ‘Gadha’, which means mace.(v) Features skillful use of weapons, including stick, Kirpan, Talwar and Kataar.

Thoda can be dated back to Mahabharata, the times when bows and arrows were used in the epic battle, in the valleys of Kullu and Manali. Hence, Thoda finds its genesis in Kullu.

Pari-khanda, created by Rajputs, is a form of martial art from Bihar. It involves fighting using a sword and shield. Still practised in many parts of Bihar, its steps and techniques are widely used in Chhau dance.

Silambam is a weapon-based Indian martial art originated at Kurinjimala in modern-day Kerala, which was part of old Tamilakam in the Indian subcontinent. It is predominantly practised by the Tamil people and is identified as an art of Tamil Nadu.

Inbuan Wrestling(i) Native martial art form of Mizoram(ii) Genesis in 1750 A.D. in Dungtlang village.(iii) Very strict rules that prohibit stepping out of the circle, kicking & knee bending.(iv) Way to win- by lifting opponent off their feet(v) Also involves catching of the belt (worn around their waist) by wrestlers.(vi) Was regarded as a sport only after people of Mizoram migrated from Burma to Lushai hills.Kuttu Varisai(i) First mentioned in Sangam literature (first or second century B.C.),(ii) Means ‘empty hand combat’. Mainly practiced in Tamil Nadu but quite popular in north-eastern part of Sri Lanka & Malaysia.(iii) Unarmed Dravidian martial art(iv) Major techniques- grappling, striking & locking.(v) Uses animal based sets including snake, eagle, tiger, elephant and monkey.(vi) Considered as an unarmed component of silambam.

Try yourself:Consider the following statements about Thang-ta Martial Art:
1. It originated in the state of Arunachal Pradesh
2. It was banned by the British government.
3. Its origin can be traced back to around 500 BC.
Which of the above statement/statements is/are correct?
Explanation

Statement 1 is incorrect - Created by the Meitei people of Manipur, Thang-ta is an armed martial art that finds its mention in the most lethal combat forms.
Statement 2 is correct - The capture of Manipur by the British witnessed the ban on these art forms, however, post-independence there was a resurfacing of the same.
Statement 3 is incorrect - Their history can be traced back to the 17th century when it was used successfully used by the Manipuri kings to fight the British for quite some time.

Musti Yuddha(i) Originated in one of the oldest city of country, Varanasi.(ii) An unarmed martial art form resembling boxing.(iii) Techniques- kicks, punches, knee & elbow strikes.(iv) Rarely visible now, it was quite a popular art during 1960s.(v) It incorporated development of all three aspects, physical, mental and spiritual.(vi) Fights in this art are divided into four categories & are named according to Hindu Gods → first one is Jambuvanti that refers to the forcing opponent into submission through locking & holding; second is Hanumanti for technical superiority; third is Bhimaseni, which focuses on sheer strength while last one is Jarasandhi that concentrates on limb and joint breaking. 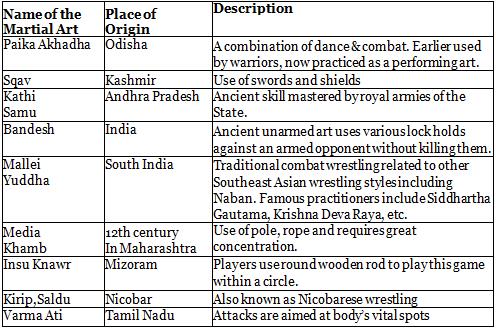 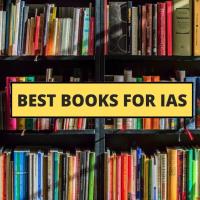