The process of the splitting of a heavy nucleus into two or more lighter nuclei is called nuclear fission.

When a slow moving neutron strikes with a uranium nucleus (92U235), it splits into 56Ba141 and 36Kr92 along with three neutrons and a lot of energy.

The main parts of a nuclear reactor are following 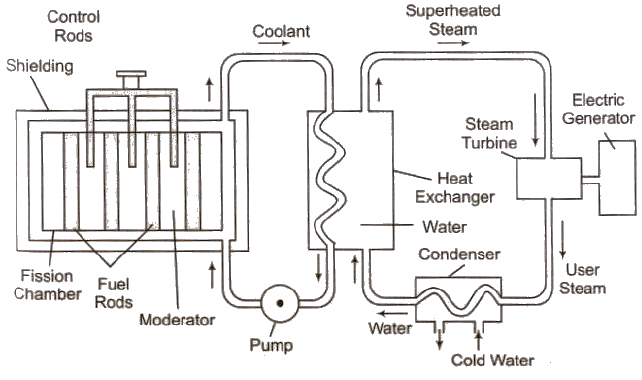 (iv) Control rods Cadmium or boron rods are good absorber of neutrons and therefore used to control the fission reaction.

Atom bomb working is based on uncontrolled chain reaction.

The process of combining of two lighter nuclei to form one heavy nucleus, is called nuclear fusion.

Three deuteron nuclei (1H2) fuse, 21.6 MeV is energy released and nucleus of helium (2He4) is formed.

In this process, a large amount of energy is released.

Hydrogen bomb is based on nuclear fusion.

The source of Sun’s energy is the nuclear fusion taking place at sun.