Organisation is the framework. It facilitates proper utilisation of men, material and money for the achievement of the goals. You will come across organisations in the; pursuit of every day activities. The post office, the municipality, the bank, the office of the agricultural extension officer, the panchayat office, the railway station, etc., are. _ examples of organisations Which serve the community. When certain goals have to be achieved and when individuals have to come together and share the work and act with. ' understanding over a period of time, an organisation is fonnpd. In this unit, we will examine the nature and importance of organisation, formal and informal organisations and their characteristics and the relationships between the two types cf organisations for effective delivery of services.

Formal organisation is the frame through which organised effort is directed for achieving the goals. It has certain distinct characteristics. They are:

A study of these characteristics would enable you to understand the nature of formal organisations.

Division of work, which is the very basis for organisation to come into existence', is made possible through formal organisation. Formal organisation which indicates the levels of management, the designation of officers and their area of operation makes it very convenient for: the division of work. This enables, as we would see in a later unit, the .organisation to specialise in certain tasks or activities and realise the goals effectively. For example, the managing director of an organisation is responsible for the achievement of the overall objectives of the organisation. However, it would be impossible for him to accomplish the task without dividing the work amongst his colleagues. When there is division of work, there is also specialisation because each unit concentrates on the specific task and the officials acquire expertise.

In formal organisations are relatively permanent than others. Though they adopt to environmental conditions and change the structure and even objectives, they are generally created to last a long time. The formal organisations not only last long, but they also grow over time. 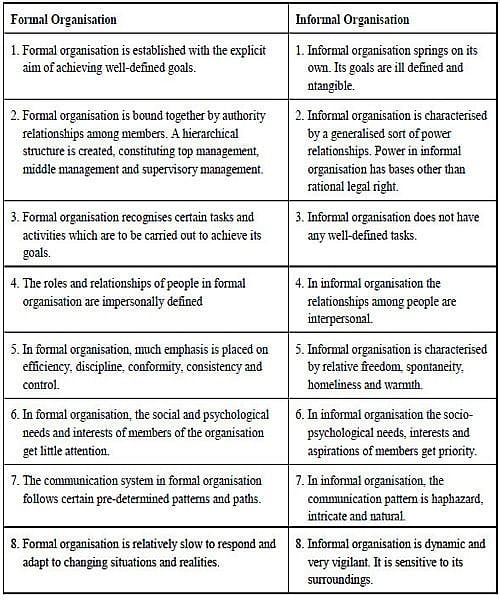 Interdependence of Formal and Informal Organisation