The document Overview of Our Environment Class 10 Notes | EduRev is a part of the Class 10 Course Science Class 10.
All you need of Class 10 at this link: Class 10

1. Different materials are cycled in the environment in separate biogeochemical cycles. Human activities affect these cycles.

2. Environment is comprised of living (biotic) as well as non-living (a biotic) components. Our environment has undergone a great change since olden times.

3. Specific enzymes are needed to break down a particular substance. Human-made materials like plastics are not broken down by the action of bacteria or other saprophytes.

5. All organisms such as plants, animals, microorganisms and human beings as well as the physical surroundings interact with each other and maintain a balance in nature.

6. All the interacting organisms in an area together with the non-living constituents of the environment form an ecosystem.

8. A garden is an ecosystem. There are different plants such as grasses, trees, flower-bearing plants, and animals like frogs, insects and birds. All these living organisms interact with each other and their growth, reproduction and other activities are affected by abiotic components of the ecosystem.

10. Organisms can be grouped as producers, consumers and decomposers according to the manner they obtain their sustenance from the environment. Hence, the energy available at each trophic level gets progressively due to loss of energy at each level.

11. All green plants and certain blue-green algae which can produce food by photosynthesis are called producers.

12. Organisms which consume the food produced, either directly from producers or indirectly by feeding on other consumers are the consumers.

13. Consumers that feed on plants are called herbivores. For example, rabbit, horse, etc.

15. Consumers that feed on plants and animals both are called omnivores. For example, cat, dog, etc. 16. Parasite is another class of consumers. These are the organisms that live on or in the body of another organism from which they obtain their food. For example, parasites of man include fleas and lice, various protozoans and tapeworms.

17. Microorganisms comprising bacteria and fungi, break down the dead remains and waste products of organisms. These microorganisms are called decomposers.

19. Series of organisms feeding on one another at various levels form a food chain (Fig. 15.1).

20. Each step of level of the food chain forms a trophic level. Organisms at the first trophic level are called autotrophs. In fact, these are the producers. They fix up solar energy and make it available for consumers.

21. Heterotrophs are the consumers.

22. Various trophic levels are indicated in Fig. 15.2 : The producers occupy the first level as shown in the figure. 24. Green plants capture about 1% of the energy of sunlight that falls on their leaves and converts it into food energy.

26. The loss of energy at each step is so great that very little usable energy is left after four trophic levels.

27. There are a greater number of individuals at a lower trophic level, the maximum is that of the producers.

28. Each organism is generally eaten by two or more other kinds of organisms which, in turn, are eaten by several other organisms. The different food chains starting from the same producers are called a food web (See Fig. 15.3). 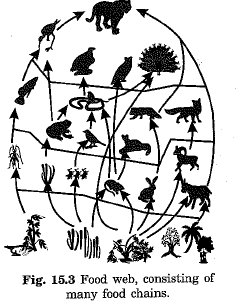 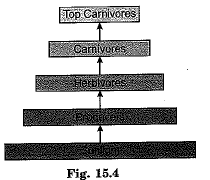 30. Some harmful chemicals enter our body through the food chain. Several pesticides used to protect our crops from diseases and pests are washed down into the soil or into water bodies.From the soil, these are absorbed by the plants and from the water bodies, these are taken up by aquatic plants and animals.

31. Human beings occupy the top level in any food chain.Therefore, maximum concentration of the harmful chemicals get accumulated in our bodies. This phenomenon is called biological magnification.

32. Foodgrains like wheat and rice, vegetable and fruits and even meat contain varying amounts of pesticide residues through the food chain.

33. The layer of ozone gas at a higher level from the earth is called ozone layer. Ozone is a deadly poison but at a higher level of atmosphere, it shields the surface of the earth from ultraviolet radiations from the Sun. This radiation is highly damaging to organisms as it causes skin cancer in human beings.

34. Ozone is formed at higher level of atmosphere by the action of UV rays on oxygen as shown below :

35. The amount of ozone in the atmosphere has dropped significantly since 1980, due to use of synthetic chemicals like chlorofluorocarbons (CFCs) which are used as refrigerants and in fire extinguishers.

36. In 1987, the United Nations Environment Programme (UNEP) succeeded in bringing about an agreement to freeze CFC production at 1986 levels.

37. Specific enzymes are needed for breakdown of specific substances. Hence, one enzyme will not work for all substances. Also, not all substances can be broken down by enzymes. Such substances are called non-biodegradable. They may persist in the environment.

38. We find lots of garbage around us in the towns and cities. Improvement in our lifestyle has resulted in greater amounts of waste material generation. Changes in packaging have resulted in much of our waste becoming non-biodegradable. These factors have an adverse impact on our environment.