When a number or integer (not a fraction) is multiplied by itself, the resultant is called a ‘Square Number’.

Odd and Even Square Numbers

The following are the properties of the square numbers:

How to Find the Square Root of an Integer?

(i) By the method of Prime Factors:

(ii) By the method of Long Division:

This method can be used when the number is large and the factors cannot be determined easily. This method can also be used when we want to add a least number or to subtract a least number from a given number so that the resulting number may give a perfect square of some number.Steps of Long Division Method for Finding Square Roots:Step I: Group the digits in pairs, starting with the digit in the units place. Each pair and the remaining digit (if any) is called a period.Step II: Think of the largest number whose square is equal to or just less than the first period. Take this number as the divisor and also as the quotient.Step III: Subtract the product of the divisor and the quotient from the first period and bring down the next period to the right of the remainder. This becomes the new dividend.Step IV: Now, the new divisor is obtained by taking two times the quotient and annexing with it a suitable digit which is also taken as the next digit of the quotient, chosen in such a way that the product of the new divisor and this digit is equal to or just less than the new dividend.Step V: Repeat steps (2), (3) and (4) till all the periods have been taken up. Now, the quotient so obtained is the required square root of the given number.

Cube root of a is denoted as

3. Number ending in 8 can never be a perfect square.4. Remember the squares and cubes of 2 to 10. This will help in easily solving the problems. 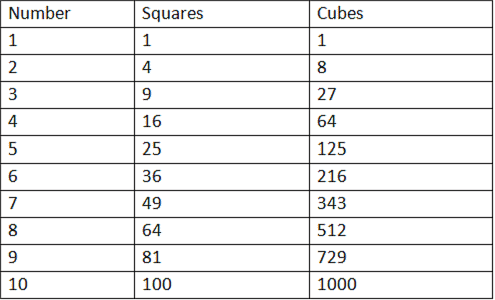 Some Solved Questions on Squaring and Square Roots