Example 1: The following pie chart shows the amount of subscription generated for Indian Bonds from different categories of Investors. 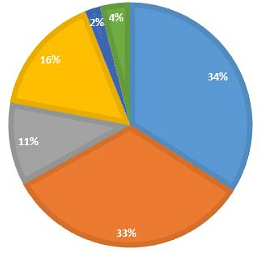 Question 2: What percentage of total investment is coming from either FII’s or NRI’s?

Ans 2: This is a very direct question and the answer is 44%.

Question 3: If the total investment other than by FII and corporate houses is INR 335,000 crore, then the investment by NRI’s and offshore funds will be (approximately):

Ans 3: This question will be solved in a similar manner like the question 1.  The investment other than by FII’s and the corporate house is total is-s 33% amounted to 335,000 crores.

Question 4: What is the approximate ratio of investment flows into India Bonds from NRI’s to corporate houses?

Question 5: In the corporate sector, approximately how many degrees should be there in the central angle?

Question 7: If the flow from the FII’s after the doubling (of the previous question) were to the tune of US$ 500 million, what would be the total investment into Indian Bond in US $’s?

Example 2: Study the following diagram carefully and answer the questions: 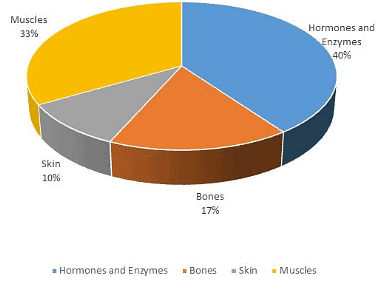 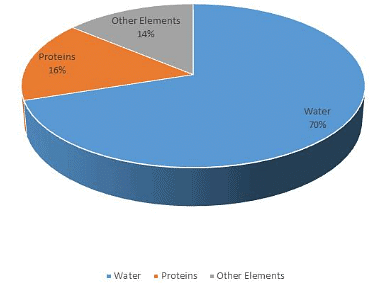 Question 2: What will be the quantity of water in the body of a person weighing 50 kg?

Ans 3: Again, using both pie charts we know that 33% of body weight is constituted in muscles whereas 17% in bones and 16% of it will be protein.

Question 4: To show the distribution of proteins and the other dry elements in the human body, the arc of the circle should subtend at the centre an angle of;

Question 5: In the human body, what part is made of neither bones nor skin?

d.) None of these

XAT 2012: The following pie chart shows the percentage distribution of runs scored by a batsman in a test innings. 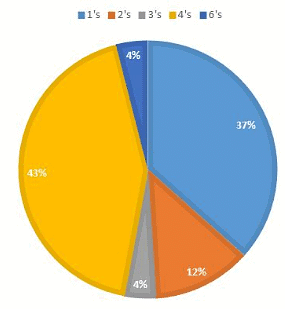 Question 2: If 5 dot balls had been hit for 4s, and if two of the shots for which the batsman scored 3 runs each had fetched him one run instead, what would have been the central angle of the sector corresponding to the percentage of runs scored in 4s?

SNAP 2005:  Study the sector-wise sales of a group of companies for the financial year 2004-05 and answer the following question: 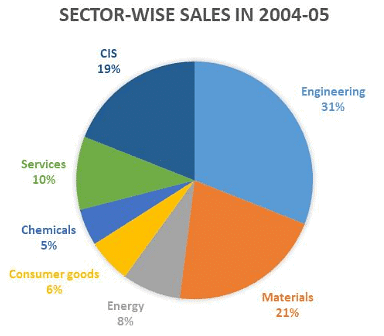 Question 1: This group of companies operates in multiple sectors. The holding company has decided to closely monitor a minimum number of sectors (not exceeding 5) contribution together a major part (at least 80%) of sales of the group. Identify the correct set of sectors.

Ans 1: The solution to this question is very easy. Just use the pie chart and add the highest 4 contributing sectors i.e. Engineering, Materials, CIS, Services. Their total is 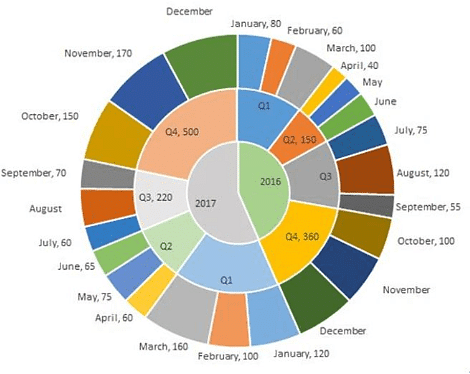 Question 4: During which month was the percentage increase in sales from the previous month’s sales the highest?a.) October of 2017b.) October of 2016c.) March of 2016d.) March of 2017 Ans: To easily solve the questions we can first represent the information given in the pie-chart in a consolidated table to make it easier to read and understand.

As you can see in the above table there a few month’s sales are missing and we need to evaluate them first from the given information and then find the answers to the above-given question.

Using that we can easily find the rest of the month sales values i.e. 50 and 60 respectively.

Thus, sales for these months are 120 and 140 respectively.

Now as you can see in the table, we have found out all missing monthly sales figure except for December’17 and August’17 which can be easily find out as

Now we are in a position to answer all the given questions using the above table.

Ans 2: We need to evaluate the quarter with the highest increase in sales in percentage terms.

Hence, using the above table we get the answer is Quarter 4 Ans 3: As we can clearly notice above from the table that the decrease in sales is only in quarter 2 of both the years 2016 and 2017.

Ans 4: As given options are only for may and October and we can see that sales in October 2017 is more than double ( from 70 in November to 150 in October ) so it is highest than other given month. Correct option a) October 2017