The document Pituitary Gland NEET Notes | EduRev is a part of the NEET Course Biology Class 11.
All you need of NEET at this link: NEET 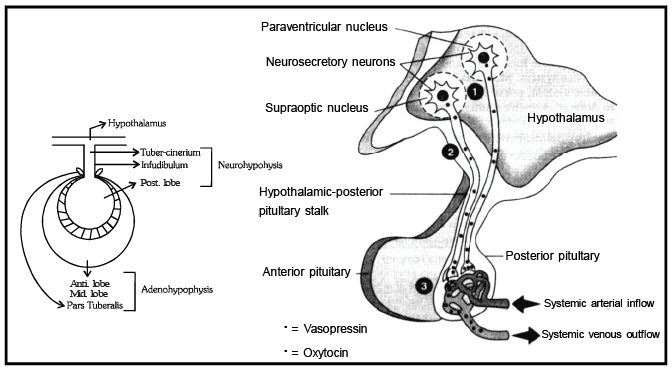 Hypophyseal portal vein collects the blood from hypothalamus and supplies to the pituitary gland.

1. Basophils → They are large cells & found in the peripheral part of gland. They are more in number.

2. Acidophil → They are small in size & found in the central part of pituitary gland.

3. Neutrophils → They are smallest in size and are found in scattered form. They are minimum in number.

All these hormones are of proteinaceous nature.

(1) On bone : It increases the longitudinal length of bone.

(ii) GH stimulates growth of muscle and cartilage due to increase synthesis of collagen, muscle grow in bulk.

Fat : Increases lipolysis so that free fatty acid level of plasma rises. Under the influence of growth hormone, fat is used for energy in preference to carbohydrate and protein, due to this protein deposition increases.

Carbohydrate:– Hyperglycemia develops due to decreased uptake of glucose in the cells, so it is also called diabetogenic hormone.

In this way this hormone is important for the growth of body.

Diseases due to hyposecretion or hypersecretion of somatotropin hormone :– (a) Hyposecretion of STH :– Due to deficiency of STH in childhood or adolescence, dwarfism is observed.

(b) Hypersecretion of STH :– Due to hypersecretion in childhood and adolescence, a higher quantity of aminoacids is supplied to the body cells.

(i) Epiphyseal cartilage present on the edges of bones does not convert into bone for a long time.  Thus the bones of legs & hands become very long and height of that person increases very much. Body becomes imbalanced. This disease is called Gigantism.

(ii) Acromegaly :– Due to hypersecretion of STH in adulthood, jaw bones of the affected person become long, cheek bones buldge out, broad hands, legs & fingers of person becomes gorilla like. These symptoms are observed as a result of acromegaly.

It is secreted by acidophil (Lactotroph) cells.

(1) Lactation (Galactopoiesis) :- Prolactin is responsible for lactation in postpartum (after delivery) women.

Hormones secreted by adenohypophysis of pituitary gland are under the control of neuro- secretory cells of hypothalamus. These neuro-secretory cells produce some substances in very small amount which are called releasing factors.

(2) Thyrotropin releasing factor [TRF]:- It stimulates the secretion of TSH.

(5) Prolactin release factor [PRF] :– It stimulates the secretion of Prolactin.

(7) Melanocyte release factor [MRF] :– It stimulates the secretion of MSH.

(8) Melanocyte inhibitory factor [MIF] :– It inhibits the secretion of MSH.