Q.1. The gaseous plant growth regulator is used in plants to:     (NEET 2022)(a) promote root growth and root hair formation to increase the absorption surface (b) help overcome apical dominance (c) kill dicotyledonous weeds in the fields (d) speed up the malting process

Ans. aEthylene is a gaseous plant growth regulator, synthesised by most ripening fruits and ageing tissues. Ethylene is used as both plant growth promoters and plant growth inhibitors. It is mainly used to stimulate the ripening of fruits. It also promotes root growth and root hair formation to increase the absorption surface. Cytokinin can overcome apical dominance caused by auxin. Synthetic auxin kill dicotyledonous weeds in the fields. Gibberellins are used to speed up the malting process in brewing industry.

Ans. cPlants follow different pathways in response to environment or phases of life to form different kinds of structures. This ability is called plasticity. Example heterophylly in cotton, coriander and larkspur. In such plants, the leaves of the juvenile plant are different in shape from those in mature plants. Maize plants do not show plasticity.

They help to initiate rooting in stem cuttings, an application widely used for plant propagation. Auxins promote flowering e.g. in pineapples. They help to prevent fruit and leaf drop at early stages but promote the abscission of older mature leaves and fruits.In most higher plants, the growing apical bud inhibits the growth of the lateral (axillary) buds, a phenomenon called apical dominance. Removal of shoot tips (decapitation) usually results in the growth of lateral buds (Figure 15.11). It is widely applied in tea plantations, hedge-making. Can you explain why? 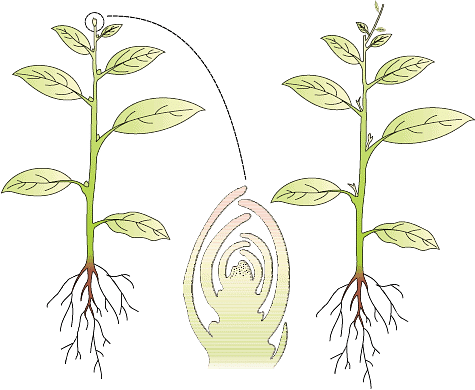 Q.4. Plants follow different pathways in response to environment or phases of life to form different kinds of structures. This ability is called:     (NEET 2021)(a) Plasticity(b) Maturity(c) Elasticity(d) Flexibility

The site of perception of light/dark duration are the leaves.

Q.6. Name the plant growth regulators which upon spraying on sugarcane crop, increases the length of stem, thus increasing the yield of sugarcane crop.     (NEET 2020)(a) Ethylene (b) Abscisic acid (c) Cytokinin(d) Gibberellin 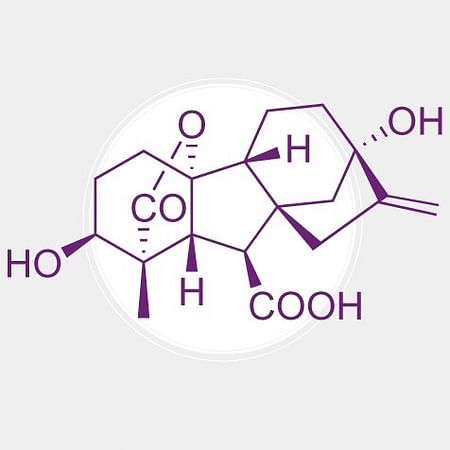 It is able to promote the internode elongation because of which the size of sugarcane increases.

Period of growth characterized by the number of cells increasing at an exponential rate.

Select the correct option from the following

(a) Bacillus thuringiensis produces the cry proteins, which are Bt toxins and have insecticidal properties.(b) The highly thermostable DNA polymerase from Thermus aquaticus is ideal for both manual and automated DNA sequencing because it is fast & highly processive and remain active during the high temperature induced denaturation of double stranded DNA.(c) The tumor-inducing (Ti) plasmid of Agrobacterium tumifaciens has been modified into a cloning vector. It is used to deliver required genes into plants.(d) Salmonella typhimurium is the first recombinant DNA that cut the piece of DNA from a plasmid carrying antibiotic resistance gene in the bacterium and linked it to the plasmid of E.coli.

Q.10. What is the site of perception of photoperiod necessary for induction of flowering in plants?     (NEET 2018)(a) Leaves(b) Lateral buds(c) Pulvinus(d) Shoot apex

Shoot apices modify themselves into flower apices prior to flowering, but they themselves cannot perceive photoperiods. Leaves are the site of perception of light/dark photoperiods. It has been hypothesised that leaves contain a hormonal substance responsible for flowering, which migrates from leaves to short apices for inducing (lowering only when plants are exposed to necessary inductive photoperiods.

Q.11. Fruit and leaf drop at early stages can be prevented by the application of     (NEET 2017)(a) Ethylene(b) Auxins(c) Gibberellic-acid(d) Cytokinins

In low concentrations, auxins such as 2, 4-D (2,4- Dichlorophenoxy acetic acid) is useful in preventing pre-harvest fruit drop and leaf drop.

Q.12. You are given a tissue with its potential for differentiation in an artificial culture. Which of the following pairs of hormones would you add to the medium to secure shoots as well as roots?     (NEET 2016)(a) IAA and gibberellin(b) Auxin and cytokinin(c) Auxin and abscisic acid(d) Gibberellin and abscisic acid

Phytochrome is a chromoprotein i.e., plant pigment that can detect the presence or absence of light and is involved in regulating many processes that are linked to day length (photoperiod), such as seed germination and initiation of flowering. It consists of a light detecting portion, called a chromophore, linked to a small protein and exists in two inter-convertible forms with different physical properties.

Avena curvature test is a test based on the experiments of Went (1928) which can measure auxin upto 300 μg/litre, Indole 3-acelie acid (IAA) is a universal natural auxin and Avena curvature test serves as an accurate bioassay for this plant hormone.

Q.16. What causes a green plant exposed to the light on only one side, to bend toward the source of light as it grows?      (NEET 2015)(a) Green plants seek light because they are phototropic(b) Light stimulates plant cells on the lighted side to grow faster(c) Auxin accumulates on the shaded side, stimulating greater cell elongation there.(d) Green plants need light to perform photosynthesis

Avena coleoptile curvature is used for the bioassay of auxin.

Q.18. Dr. F. Went noted that if coleoptile tips were removed and placed on agar for one hour, the agar would produce a bending when placed on one side of freshly-cut coleoptile stumps. Of what significance is this experiment?     (NEET 2014)(a) It made possible the isolation and exact identification of auxin.(b) It is the basis for quantitative determination of small amounts of growth-promoting substances.(c) It supports the hypothesis that IAA is auxin.(d) It demonstrated polar movement of auxins.

Charles Darwin and his son Francis Darwin observed that the coleoptiles of Oat (Avena sativa) and canary grass (Phalaris canariensis) responded to unilateral illumination by growing towards the light source (phototropic curvature or phototropism). After a series of experiments, it was concluded that the tip of the coleoptile was the site of production of a substance, that caused the bending of coleoptile.

Q.19. A few normal seedlings of tomato were kept in a dark room. After a few days they were found to have become white-coloured like albinos. Which of the following terms will you use to describe them?     (NEET 2014)(a) Mutated(b) Embolized(c) Etiolated(d) Defoliated

Etiolation is depigmentation of leaf when plant is placed in dark for more than 36 hrs.

Abscisic Acid (ABA) is called stress hormone which works in adverse environmental condition when there is low water content in atmosphere or in drought conditions. ABA causes the stomatal closure of leaves due to which the water loss by the plant is minimized.

Exalbuminous (non-endospermic) seeds usually store reserve food material in cotyledons. In these seeds, the endosperm is used up and not present in mature seedsExample: Bean, Gram and Pea.