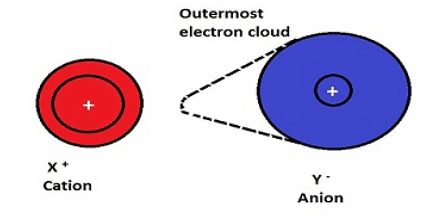 Fajans’ rule predicts whether a chemical bond will be covalent or ionic. A few ionic bonds have partial covalent characteristics which were first discussed by Kazimierz Fajans in 1923. At that time with the help of X-ray crystallography, he was able to predict ionic or covalent bonding with the attributes like ionic and atomic radius.

What is Fajans’ rule?

We know that d orbitals are not good at shielding, so we can say that the anion (Cl–) would be more polarised because the d orbital is poor at shielding making HgCl2 more covalent than CaCl2 because Ca2+ ion has a noble gas configuration.Now to answer the question that we asked first, amongst the alkali chlorides, which one is the most covalent?Since the anion is the same, we have to compare the cations. According to Fajans’ rules, smaller the cation, more is the covalency. Therefore, LiCl is the most covalent.Let us Understand Fajans’ Rule Using a Detailed Illustration:Consider Aluminum Iodide (AlI3)

This is an ionic bond which was formed by transfer of electrons.

Consider Aluminium Fluoride (AlF3)This is an ionic bond which was also formed by transfer of electron. But here the fluorine being smaller attracts the shared pair of an electron more towards itself and so there is sufficient charge separation to make it ionic.

The reluctance of s electron pair of some heavy elements