The document Polarization of Light Notes | Study Physics For JEE - JEE is a part of the JEE Course Physics For JEE.
All you need of JEE at this link: JEE

The phenomena of restructuring of electric vectors of light into a single direction is called polarization.

Ordinary light has electric vectors in all possible directions in a plane perpendicular to the direction of propagation of light.

When ordinary light is passed through a tourmaline, calcite or quartz crystal the transmitted light have electric vectors in a particular direction parallel to the axis of crystal. This light is plane polarized light.

[A plane containing the vibrations of polarized light is called plane of vibration.

A plane perpendicular to the plane of vibration is called plane of polarization.]

Polarization can take place only in transverse waves.

A nicol prism is an optical device which is used for producing  plane polarized light and analyzing light the same.

The nicol prism consists of two calcite crystal cut at 68° with its principal axis joined by a glue called Canada balsam.

When a beam of completely plane polarized light is incident on an analyzer, the intensity of transmitted light from analyzer is directly proportional to the square of the cosine of the angle between plane of transmission of analyzer and polarizer, i.e.,

When a polarizer and analyzer are perpendicular to each other, then intensity of transmitted light from analyzer becomes O.

When unpolarized light is incident at an angle of polarization (ip) on the interface separating air from a medium of refractive index μ, then reflected light becomes fully polarized, provided 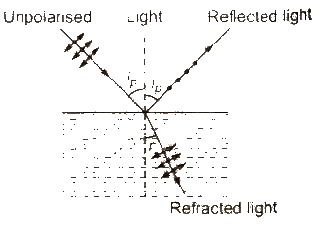 Few double refracting crystals have a property of absorbing one of the two refracted rays and allowing the other to emerge out. This property of crystal is called dichroism.

It is a polarizing film mounted between two glass plates. It is used to produce polarized light.

A polaroid is used to avoid glare of light in spectacles.

(i) Polaroids are used in sun glasses. They protect the eyes from glare.(ii) The polaroids are used in window panes of a train and especially of an aeroplane. They help to control the light entering through the window.(iii) The pictures taken by a stereoscopic camera. When seen with the help of polarized spectacles, create three dimensional effect.(iv) The windshield of an automobile is made of polaroid. Such a mind shield protects the eyes of the driver of the automobile from the dazzling light of the approaching vehicles.

The document Polarization of Light Notes | Study Physics For JEE - JEE is a part of the JEE Course Physics For JEE.
All you need of JEE at this link: JEE