The document Pollution, Pollutants and Ozone Layer Depletion Class 11 Notes | EduRev is a part of the Class 11 Course Chemistry for JEE.
All you need of Class 11 at this link: Class 11

Environmental chemistry is the branch of chemistry which is concerned with the chemical phenomenon occurring in the environment.

Atmosphere is a gaseous mixture of air that surrounds the earth. Its different layers are as follows: (i) Troposphere: It is the lowest region of the atmosphere extending from earth’s surface to the lower boundary of the stratosphere. It contains water vapour and is greatly affected by air pollution.

(ii) Stratosphere: The layer of the earth’s atmosphere above the troposphere and below the mesosphere, is called stratosphere. Ozone layer is too present in this region.

(iii) Mesosphere: It is the region of the earth’s atmosphere above the stratosphere and below the Thermosphere. It is the coldest region (temperature – 2 to 92°C) of atmosphere.

(iv) Thermosphere: The upper region of the atmosphere above the mesosphere is called Thermosphere. It is the hottest region (temperature up to 1200°C).

(v) Exosphere: It is the uppermost region of atmosphere. It contains atomic and ionic O2, H2 and He.

It is the aqueous envelop of the earth e.g., oceans. lakes etc. The solid rocky portion of the earth constitute the lithosphere. It may be described as contamination of environment with harmful wastes mainly arising from certain human activities. These activities release materials which pollute atmosphere, water and soil. (i) Natural pollution: This type of pollution is caused by the natural sources e.g., volcanic eruptions, release of methane by paddy fields and cattles, forest fires etc. 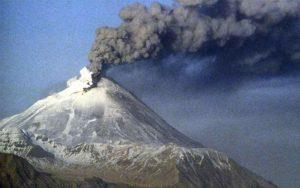 (ii) Man-made pollution: This type of pollution is resulting from human activities like burning of the fuels, deforestation, industrial effluents, pesticides etc.

Any substance produced either by a natural source or by human activity which causes adverse effect on the environment is called pollutant.

Classification on the Basis of Their Degradation: 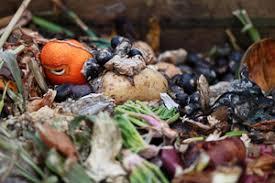 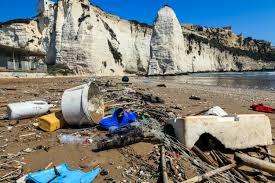 They can further be of two types as below:

Classification on the Basis of Their Occurrence in Nature: (i) Primary pollutants: These are present in same form in which these are added by man e.g., DDT, pesticides, fertilizers etc.

(ii) Secondary pollutants: These occur in different forms and are formed by the reaction between the primary pollutants in the presence of sunlight e.g., HNO3, H2SO4 PAN, ozone etc.

Classification on the Basis of Their Existence in Nature

(i) Quantitative pollutants: These are naturally present in nature and also added by man. These become pollutants when their concentration reaches beyond a threshold value in the environment, e.g., CO2, nitrogen oxide etc.

(ii) Qualitative pollutants: These are not present in the nature but are added by nature only due to human activities. e.g., pesticides. fungicides. herbicides etc.

Tropospheric Pollution: It is caused by gaseous pollutants and particulate matter. Air pollution occurs when the concentration of a normal component of the air or a new chemical substance added or formed in air, build up to undesirable proportions causing harm to humans, animals, vegetation and materials. The chemical substances and particles causing pollution are called air pollutants. 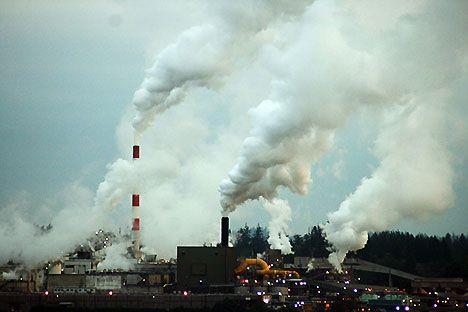 The major air pollutants are:

(i) Carbon monoxide(CO): It is produced by incomplete combustion of gasoline in motor vehicles, wood. coal, incineration and forest fires. It induces headache, visual difficulty, coma or death.

It blocks the normal transport of oxygen from the lungs to other parts of the body, by combining with haemoglobin of the blood. (Its affinity towards haemoglobin is about 200 times more than the oxygen.)

It obstructs the movement of air in and out of lungs. It is particularly poisonous to trees causing chlorosis and dwarfing. In the presence of air, it is oxidised to SO3 which is also an irritant.

Taj Mahal is reported to be affected by SO2 and other pollutants released by oil refinery of Mathura.

(iii) Oxides of nitrogen: NO2 and NO are obtained by combustion of coal, gasoline. natural gas, petroleum refining, chemical industries and tobacco smoke. In upper atmosphere, these are emitted by high flying jets and rockets. 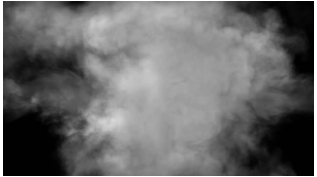 (v) Ammonia: It is produced by fertilizer works.

(vii) Zn and Cd: These are obtained from zinc industries.

(viii) Freon (or CCl2F2): Their source is refrigerator.

It is a mixture of smoke (composed of tiny particles of carbon, ash and oil etc from coal combustion) and fog in suspended droplet form.

It is of two types:

It is coal smoke plus fog. The fog part is mainly SO2 and SO3. It has sulphuric acid aerosol. It causes bronchial irritation and acid rain. It is reducing in nature and occurs in cool humid climate.

The oxidized hydrocarbons and ozone in a warm, dry and sunny climate cause photochemical smog. Its brown colour is due to the presence of NO2.

The nitrogen dioxide by absorbing sunlight in blue and UV region decomposes into nitric oxide and atomic oxygen followed by a series of the other reactions producing O3, formaldehyde, acrolein and peroxyacetyl nitrates.

It is oxidising in nature and causes irritation to eyes, lungs, nose, asthmatic attack and damage to plants.

The phenomenon in which atmosphere of earth traps the heat coming from the sun and prevents it from escaping into the outer space is called green house effect. Certain gases, called green house gases [carbon dioxide, methane, ozone, chlorofluorocarbon compounds (CFCs) and water vapour] present in the atmosphere absorb the heat given by earth and radiate it back to the surface of the earth. Thus, warming of the earth leads to the warming of air due to green house gases, which is called global warming. 1. The green house gases are useful in keeping the earth warm with an average temperature of about 15° to 20°C.

3. Increase in the concentration of CO2 in the atmosphere leads to increase in the temperature of the earth’s surface. As a result evaporation of surface water will increase which further helps in the rise of temperature and results in the melting of glaciers and polar ice caps and hence, level of sea water may rise.

The pH of normal rain water is 5.6 due to the dissolution of CO2 from atmosphere.

HNO3 is removed as a precipitate or as particulate nitrates after reaction with bases (like NH3, particulate lime etc).

The presence of hydrocarbons and NOx step up the oxidation rate of the reaction. Soot particles are also known to be strongly involved in catalysing the oxidation of SO2.

Ozone is a light bluish gas and absorbs UV radiations of the sun which are harmful to living beings. But nowadays ozone layer is being depleted by CFCs (chlorofluorocarbons).

UV radiations cause the chlorofluorocarbons to dissociate to fOl1D highly reactive chlorine free radical which reacts with ozone to form chlorine monoxide.

Ozone hole is formed over Antarctica and some parts of non – polar regions also.

In other parts of stratosphere NO2, CH4 react with ClO* and Cl* respectively and act as natural sink for ClO* and Cl*.

These reactions consume Cl* and ClO* hindrance to ozone depletion.

These clouds are of two types are as follow:

Type I Clouds: They contain some solidified nitric acid trihydrate (HNO3 * 3H2O) formed at about -77°C.

Type II Clouds: They contain some ice formed at about – 85°C. These clouds play important role in ozone depletion by hydrolysing chlorine nitrate.

Hypochlorous acid and Cl2 are formed which are reconverted into reactive chlorine atoms with the help of sunlight which causes ozone depletion.]

Polar vortex: During winters, when polar stratospheric clouds are formed over Antarctica. Stable wind patterns in the stratosphere encircle the continent which is called polar vortex. It is tight whirlpool of winds which is so rigid that air within it is isolated from the sun and forms the warmer air of temperate region to fill up ozone hole. 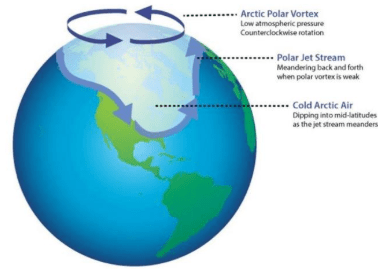 Consequences of Depletion of Ozone Layer

(a) Loss of sight-The UV radiation damage the cornea and lens of the eyes.

(c) Skin cancer-This type of radiation is known to be cancer-causing agent.