The document Pre Historic Period of Ancient India UPSC Notes | EduRev is a part of the UPSC Course History(Prelims) by UPSC Toppers.
All you need of UPSC at this link: UPSC

Earth is very old and so is the antiquity of man. The earliest human fossils have been found in Africa dating about 4.2 million years. The primitive man was shorter in height and had a smaller brain. Homo sapiens evolved over a period of these years about 50,000 years ago. Humans have been using stone tools and their life story is, therefore, divided into Paleolithic,Mesolithic and Neolithic age. 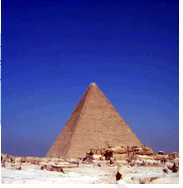 The designation of the cultural past of man was done by P.F. Suhm in as early as 1776. C.J.Thomsen, in 1836, followed the same to arrange the exhibits in Danish museums. Lubbock in France divided the stone age further into Paleolithic and Neolithic. In 1930, Gabriel de Mortillet, a French investigator, started the practice of naming cultural divisions in the manner of compartments or stages. Yet, it is generally classified as follows:-

It was basically a hunting and food gathering culture 'Palaeo' means 'old' and 'lithic' means 'stone'. Palaeolithic age in India is divided into three phases: 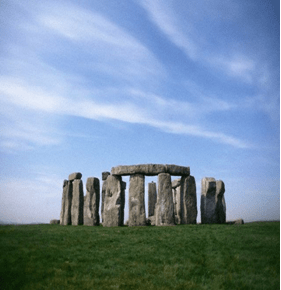 Earliest Palaeolithic man lived on hunting and food gathering. The hunting and gathering pattern was dependent upon the season. The nature of stone tools also varied according to the climate. Not knowing how to grow his food, he ate fruits, birds, raw animal flesh etc. The people were wanderers and moved from places to place. They took refuge under the rocks in caves and hollow tree trunks.

Rock paintings and carvings have been numerously founded in Bhimbetka from different periods. The animals depicted in these paintings were mostly bisons, elephants, tigers, rhinocerous, boars etc. and were based on their hunting lives. The upper Palaeolithic art is characterised by red and green colours.

It was the transitional between Palaeolithic and Neolithic ages. Its characcteristic tools are microliths all made of stone. The microliths were first discovered by Carlyle in 1867 from Vindhyan Rock Shelters. This age is also known by various names like Late Stone Age or Microlithic Age. The Mesolithic people lived on hunting, fishing and food-gathering. Earliest domestication of animals has alo been witnessed from Madhya Pradesh and Rajasthan. 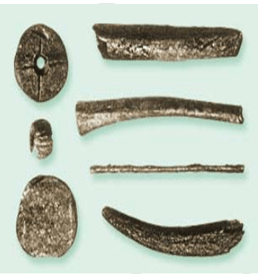 Mesolithic Tools : Tools are characterised by parallel-sided blades taken out from prepared cores of fine-materials as chert, crystal, chalcedony, jasper, carnelian, agate etc. and were generally one to five centimeters long.Paintings : At various sites in Bhimbetka, Adamgarh, etc. rock and cave paintings have been discovered. In these paintings, various subjects including animals and human scenes have been found. Animals are the most frequently depicted subjects either alone or in large and small groups and shown in various poses.

Depiction of human figures in rock paintings is quite common. Dancing, running, hunting, playing games and quarrelling were commonly depicted scenes. Colours like deep red, gree, white and yellow were used in making these paintings. Neolithic People : The civilisation and culture of the Neolithic age shows distinct traces of progress. The Neolithic men had a settled life. They practised agriculture and grew fruits and corn. Animals, such as the cow, dog, ox, goat etc. were domesticated. The art of producing fire by the friction of bamboos or pieces of stones was known to them. Instead of eating the uncooked flesh of various animals, they now started roasting it. Besides this, bows and arrows were invented and were used for the purpose of hunting. They also learnt pottery, at first by hand and then with the potter's wheel. They painted and decorated their pots. They lived in caves, the walls of which were polished and painted with the scenes of hunting and dancing. The also learnt the art of spinning and weaving clothes. They used to bury their dead and construct tombs over them which were known as Dolmens, Menhirs etc.s

Neolithic Tools : The stone tools of the Neolithic age bear unmistakeable signs of polish either all over the tools or at the buttend and working-end, or only at the working end. They fashioned their tools out of fine-grained dark-green trap, though there are examples of the use of diorite, basalt, slate, chlorite, schist, indurated shale, gneiss, sand stone and quartzite.

Occupation : Neolithic settlers were cattle-herders and agriculturists. They produced ragi, wheat, barley, rice, masoor, moong, kulthi etc. Hand-made pottery is also found in the early  stage. Elephant, rhino, buffalo, ox, stag remains are also found in plenty. But there is no specification of these domesticated. The pottery were well made but were coarse in nature, not that much polished.

Tools making was another important occupation which included a variety of picks, scrapers, eyed needles, bodkins and pierced batons.

Towards the end of the Neolithic period began the use of metals. Firt metal to be used was copper and the culture of that time is called Chalcolithic cultre. The earliest settlements belonging to this phase are extended from the Chhotanagpur plateau to the copper Gangetic basin. Some sites are found at Brahmagiri near Mysore and Navada Toli on the Narmada.

The transition from use of stone to the use of metals is slow and long drawn. There is no doubt that there was an overlapping period when both stone and metals were used. This is proved by the close resemblance of metallic tools and implements with those made of stone. The Chalcolithic 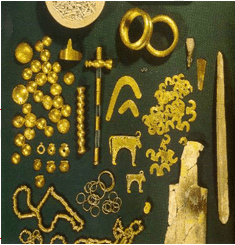 i.e. copper bronze age or stone-copper age of India produced a splendid civilisation in the Indus Valley which spread in the neighbouring regions.

Occupation: Their economy was based on subsistence agricultre, stock-raising, hunting and fishing. Their tools consisted of a specialised blade and flake of silicious material like chalcedony and chert. Copper and bronze tools were present in a limited number. The culture shares the common characteristic of painted pottery.

Burial Practices: Another striking feature was the burial practice of the dead. The dead were buried in north-south position in Maharashtra but in east-west position in south India. In eastern India, only a fraction of population buried their dead.

About Pottery and Types