The document Preamble : Indian Polity UPSC Notes | EduRev is a part of UPSC category.
All you need of UPSC at this link: UPSC

The source of the Preamble is the historic objective resolution of Pandit Nehru adopted by the Constituent Assembly on January 22, 1947. That resolution was '.....a declaration, a firm resolve, a pledge, an undertaking and for all of us a dedication'. The objectives of the resolution were:(i) India shall be an independent sovereign republic;(ii) The territories that now comprise British India, the territories that now form the Indian States, and such other parts of India as are outside British India and the States as well as such other territories as are willing to be constituted into Independent Sovereign India, shall be a Union of them all;(iii) The said territories, shall possess and retain the status of autonomous units together with residuary powers, and  exercise all powers and functions of government and administration, save and except such powers and functions as are vested in or assigned to the Union, or resulting therefrom;(iv) Power and authority of Sovereign Independent India, its constituent parts and organs of governments are derived from the people;(v) All the people of India shall be guaranteed and secured justice, social, economic and political; equality of status, of opportunity, and before the law; freedom of thought, expression, belief, faith, worship, vocation, association and action, subject to the law and public morality;(vi) Adequate safeguards shall be provided for minorities, backward and tribal areas, and depressed and other backward classes;(vii) The integrity of the territory of the Republic and its sovereign rights on land, sea, and  air shall be maintained according to justice and the law of civilised nations; and(viii) The ancient land attain its rightful and honoured place in the world and makes its full and willing contribution to the promotion of world peace and the welfare of mankind.

The PreambleThe ideals embodied in the resolution are faithfully reflected in the Preamble, which after the 42nd amendment in 1976, stands as:"We the people of India, having solemnly resolved to constitute India into a SOVEREIGN, SOCIALIST, SECULAR, DEMOCRATIC, REPUBLIC  and to secure to all its citizens:JUSTICE,  social, economic and political;LIBERTY of thought, expression, belief, faith and worship;EQUALITY  of status and of opportunity; And to promote among them all;FRATERNITY, assuring the dignity of the individual and the unity and integrity of the nation. 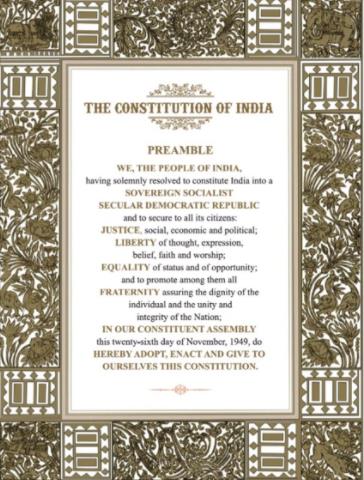 The PreambleIn our Constituent Assembly, this twenty-sixth day of November, 1949, do hereby adopt, enact and give to ourselves this Constitution."The Preamble came into force only on January 26, 1950. In this connection it may be noticed that a proposal was made in the Constituent Assembly by Santhanam that Preamble should come into force on November 26, 1949, but the said proposal was rejected. 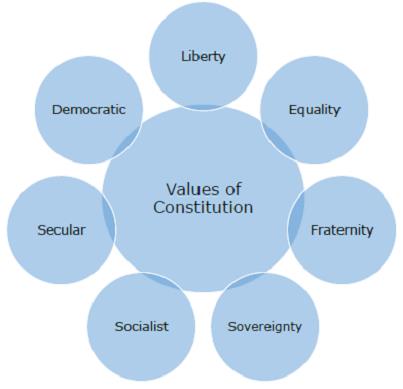 SovereignSovereignty means the independent authority of a state. It means that it has the power to legislate on any subject; and that it is not subject to control of any other state or external power.

India ceased to be a Dominion and declared itself a Republic since the making of the Constitution in 1949. Republic means government by the people, of the people and for the people.

India declared itself a Republic nation

It implies the head of the Indian state, the President, is elected by the people and all the office including that of the President is open to all citizens.

The term 'Democratic' is a comprehensive term. In a narrow political sense it refers only to the form of government, a representative and responsible system under which those who administer the affairs of the state are chosen by the electorate and accountable to them. But in its broadest sense, it embraces, in addition to political democracy also social and economic democracy. The term 'democratic' is used in this sense in the Preamble. From a social standpoint, it envisages a democratic society, infused with the spirit of justice, liberty, equality, and fraternity.

The term 'Socialist' inserted by the 42nd Amendment Act, 1976, is intended to bring out that ours is a socialist state which aims to secure to its people justice-social, economic and political. Its inclusion in the Preamble was objected on the ground that it is a vague expression and means different things to different persons. The Janata Party after coming into power defined the term 'Socialism' in the 45th Constitution Amendment Bill. According to it "Socialist Republic is a republic in which there is freedom from all forms of exploitation, social, political or economic." But because of the opposition of the Council of States, this definition had to be deleted. The expression 'Socialist' thus remains undefined.

Justice in the Preamble means common good. It is stretched to the social, economic and political arena.

Social, Economic and Political (PSE) justiceSocial justice aims at abolishing the artificial social barriers like caste, untouchability etc. In a backward county like ours, such ideals are preconditions to a healthy and genuine democracy.Economic justice means attainment of equality in economic status and promotion of the equitable distribution of material resources. Economic justice is an important guideline in shaping the economic policy of the government.Political justice implies fair and free participation of the people in the political process of the country. It involves free and fair election, the participation of the masses in the universal franchise, non-discrimination on the ground of sex, religion, etc.

Democracy, in any sense, cannot be established unless certain minimal rights, which are essential for a free and civilised existence, are assured to every member of the community. The Preamble mentions these essential individual rights as freedom of thought expression, belief, faith, and worship and these are guaranteed subject to certain regulations under the chapter on Fundamental Rights.

Guaranteeing of rights is meaningless unless all inequality is banished from the social structure and each individual has assured equality of status and opportunity.The equality of status is provided by prohibition of artificial restrictions on the grounds of religion, race, sex, colour, place of residence and the like. It is supplemented by the prohibition of untouchability and by the abolition of titles. At the same time,  equality of opportunity is provided by the guarantee of rule of law signifying equality before law and non-discrimination in matters of public employment. In addition to this civil equality the Constitution seeks to achieve political equality by providing for universal adult franchise.

Scope and Significance Purpose of the Preamble

(i) The preamble declares the authority of the people of India, which is also the source of our Constitution;

(ii) It states the objects—justice, liberty, equality and fraternity— which the constitution seeks to establish and promote;

(iii) It aids the legal interpretation of the Constitution where the language may be ambiguous;

(iv) It describes the type of government assured to the people by the Constitution—Sovereign, Secular, Democratic Republic; and

(v) It states the date of adoption and enactment of the Preamble.

The preamble includes only the aims and ideals to be attained. It is not enforceable by the Gopalan vs. States of Madras (1950). In the Berubai Enclave case (1969) the Supreme Court again upheld the non-enforceability of the preamble and further maintained that the Preamble is not a part of the Constitution and that its utility lies in according clear meaning to the twilight legal terms. But in the Keshavanand Bharti Case (1973) the Supreme court rejected the above views and held that the Preamble is a part of the Constitution and that it is subject to amendment vide Art. 368. However, the 'basic features' of the Preamble are beyond the amending power of parliament.

Amendment of the Preamble

Since the  Preamble was declared to be the part of the Constitution, it is subject to amendment. In the amending process, however, the 'basic feature' should remain intact. 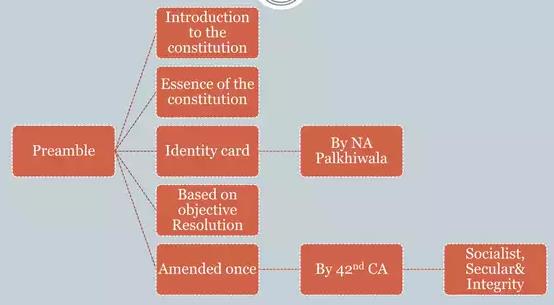 Basic feature and amendment of the PreambleThus, in 1976, by the 42nd amendment act, the words 'secular, socialist' and 'integrity of the nation' were added to the Preamble. The terms are not elucidated, so their meaning is derived through the operative provisions.