The document Prelims Questions - Biodiversity, Environment and Disaster Management UPSC Notes | EduRev is a part of the UPSC Course Environment & Additional Topics for UPSC CSE.
All you need of UPSC at this link: UPSC

1. Due to improper/indiscriminate disposal of hold and used computers or their parts, which of the following are released into the environment as e-waste? (2013)1. Beryllium2. Cadmium3. Chromium4. Heptachlor5. Mercury6. Lead7. Plutonium 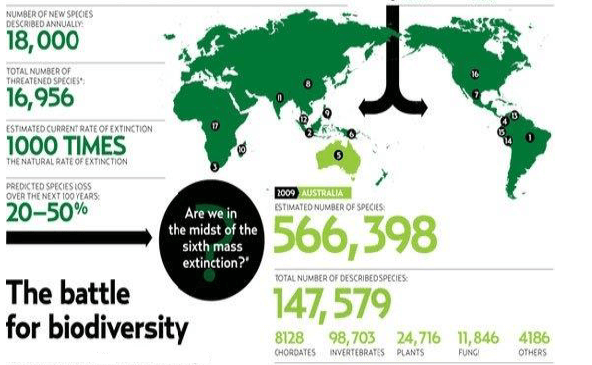 2. Improper handling and storage of cereal grains and oilseeds result in the production of toxins known as aflatoxins which are not generally destroyed by normal cooking process. Aflatoxins are produced by:(2013)(a) bacteria

3. Which of the following can be threats to the biodiversity of a geographical area? (2012)1. Global warming2. Fragmentation of habitat3. Invasion of alien species4. Promotion of vegetarianism

Select the correct answer using the codes given below:(a) 1, 2 and 3 only

Which of the statements given above is/are correct?(a) 1, 2 and 3 only

5. Biodiversity forms the basis for human existence in the following ways: (2011)1. Soil formation2. Prevention of soil erosion3. Recycling of waste4. Pollination of crops

Select the correct answer using the codes given below:(a) 1, 2 and 3 only

6. Three of the following criteria have contributed to the recognition of Western Ghats-Sri Lanka and Indo-Burma regions as hotspots of biodiversity: (2011)1. Species richness2. Vegetation density3. Endemism4. Ethno-botanical importance5. Threat perception6. Adaptation of flora and fauna to warm and humid conditions

Which three of the above are correct criteria in this context?(a) 1 2 and 6

7. Which one of the following is not a site for in-situ method of conservation of flora? (2011)(a) Biosphere Reserve

Which of the statements given above is/are correct?(a) 1 only

9. In which one among the following categories of protected areas in India are local people not allowed to collect and use the biomass? (2012)(a) Biosphere Reserves

Explanation: The carrying capacity of a biological species in environment is the population size of the species that the environment can sustain indefinitely, given the food, habitat, water and other necessities available in the environment. For the human population, more complex variables such as sanitation and medical care are sometimes considered as part of the necessary establishment. Thus Sustainable development is intertwined with Carrying capacity.

12. Consider the following statements regarding environmental issues of India: (2001)1. Gulf of Mannar is one of the biosphere reserves.2. The Ganga Action Plan, phase II has been merged with the National River Conservation Plan.3. The National Museum of Natural History at New Delhi imparts non-formal education in environment and conservation.4. Environmental Information System (ENVIS) acts as a decentralized information network for environmental information.