The document Preparation of Colloids Class 12 Notes | EduRev is a part of the Class 12 Course Chemistry Class 12.
All you need of Class 12 at this link: Class 12

Stable colloids are also known as lyophilic sols, in these strong forces of interaction exist between the dispersed phase and the dispersion medium. These are prepared by the following suitable methods.

Thus, there are two ways by which the lyophobic sols can be prepared:

(i) Condensation methods: By splitting coarse aggregates of a substance into colloidal size.

1. By Exchange of Solvents

2. By change of physical state

Colloidal solutions of certain elements such as mercury and sulphur are obtained by passing their vapour through cold water containing a stabilizer (an ammonium salt or citrate)3. Chemical methods

The chemical methods involve chemical reactions in a medium in which the dispersed phase is sparingly soluble. A condition of supersaturation is produced but the actual precipitation is avoided.

Some familiar reactions used are :

Double decomposition(i) Arsenious sulphide sol: A 1% solution of arsenious oxide is prepared is hot water. The solution is cooled, filtered and is then gradually in hot water saturated with hydrogen sulphide. This is continued till an intense yellow-coloured solution is obtained. Excess of H2S is removed by bubbling hydrogen through the solution.

Sulphur sol can also be obtained when H2S is bubbled through an oxidising agent (bromine water or nitric acid).

ReductionColloidal solutions of metals like gold, silver, platinum, lead, etc., can be obtained when their salts solutions are acted upon by reducing agents.

The colloidal solution of silicic acid is also obtained by hydrolysis of a dilute solution of sodium silicate with 4N hydrochloric acid which is added drop by drop with constant stirring. The dispersion of a freshly precipitated material into colloidal solution by the action of an electrolyte in solution is termed peptization. The electrolyte used is called a peptizing agent.

A few examples of sols obtained by peptization are: 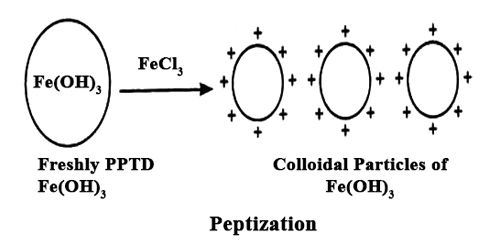 The process of peptization thus involves the adsorption of suitable ions (supplied by the electrolyte added -- particularly a common ion) and electrically charged particles then split from the precipitate as colloidal particles.

Example: Freshly prepared ferric hydroxide can be converted into a colloidal state by shaking it with water containing Fe3+ or OH¯ or FeCl3 The purification of the colloidal solution is carried out by the following methods: Various properties exhibited by the colloidal solutions are described below: 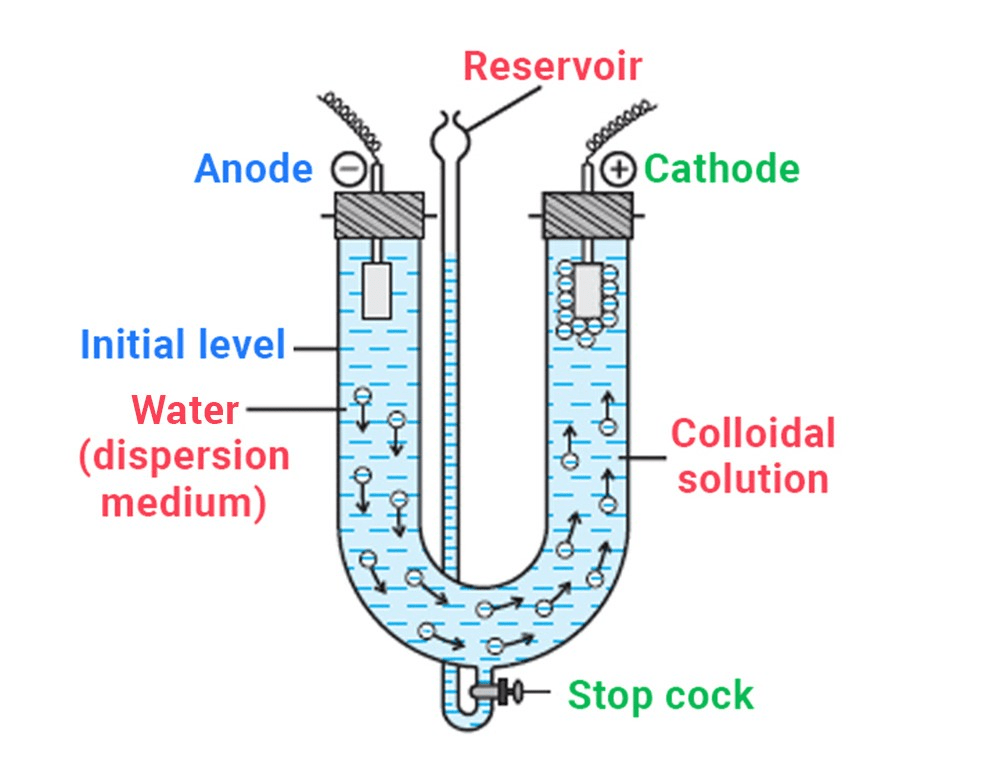 The coagulation of the lyophobic sols can be carried out in the following ways:

(i) By electrophoresis: The colloidal particles move towards oppositely charged electrodes, get discharged and precipitated.

(iii) By boiling: When a sol is boiled, the adsorbed layer is disturbed due to increased collisions with the molecules of the dispersion medium. This reduces the charge on the particles and ultimately lead to settling down in the form of a precipitate.

(iv) By persistent dialysis: On prolonged dialysis, traces of the electrolyte present in the sol are removed almost completely and the colloids become unstable and ultimately coagulate.

(v) By the addition of electrolytes: When an excess of an electrolyte is added, the colloidal particles are precipitated. The reason is that colloids interact with ions carrying charge opposite to that present on themselves. This causes neutralisation leading to their coagulation. The ion responsible for the neutralisation of charge on the particles is called the coagulating ion. A negative ion causes the precipitation of positively charged sol and vice versa.

The minimum concentration of an electrolyte in millimoles per litre required to cause precipitation of a sol in two hours is called coagulating value. The smaller the quantity needed, the higher will be the coagulating power of an ion.