The document Pressure Belts of the Earth Notes | EduRev is a part of the UPSC Course Geography for UPSC CSE.
All you need of UPSC at this link: UPSC

There are two main causes, thermal and dynamic, for the pressure differences resulting in high and low-pressure systems.

What is a Pressure Gradient?

The factors responsible for variation in the horizontal distribution of pressure are as follows:

On the earth’s surface, there are seven pressure belts. They are – Atmospheric circulation is the large-scale movement of air, and together with ocean circulation, thermal energy is redistributed on the surface of the Earth.

Latitudinal circulation – The wind belts girdling the planet are organized into three cells in each hemisphere—the Hadley cell, the Ferrel cell, and the polar cell. Those cells exist in both the northern and southern hemispheres.

Longitudinal circulation, however, is a result of the heat capacity of water, its absorptivity, and its mixing. Water absorbs more heat than the land, but its temperature does not rise as great as the land. As a result, temperature variations on land are greater than on the water. 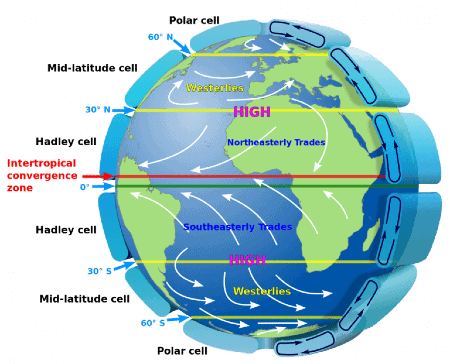