Why high grade of concrete & steel?

Classifications and TypesPrestressed concrete structures can be classified in a number of ways depending upon the feature of designs and constructions. 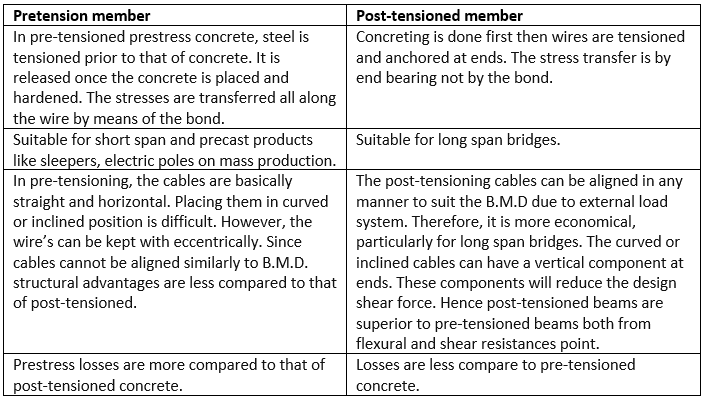 Basic Assumptions1. Concrete is a homogeneous elastic material.2. Within the range of working stress, both concrete & steel behave elastically, notwithstanding the small amount of creep, which occurs in both the materials under sustained loading.3. A plane section before bending is assumed to remain plane even after bending, which implies a linear strain distribution across the depth of the member. 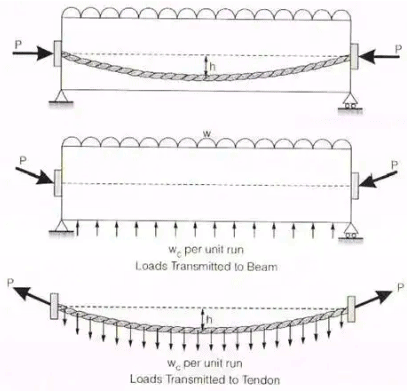 Let l be the span of the beam and h be the dip of the cable.The cable will exert an upward udl = wC / m on the beam, but the cable will be subjected to a downward udl of wC per unit run.Let V and H are vertical and horizontal components of P.V = wcl / 2The cable is an absolutely flexible member, therefore BM at every section of cable is zero. Hence BM at the centre of the cable is

Since dip of the cable is very small, we can make an approximationcosα = 1 and Pcosα = PNow consider the beam, it is subjected to(i) External load w per unit length(ii) Upward udl transmitted by the cable = wC per unit length.Net UDL = w – wCNet BM at the centre

Losses of PrestressThe steel wires of a prestressed concrete member do not retain all the preliminary prestress. A certain amount of loss of prestress always takes place.Losses may be classified as follows: 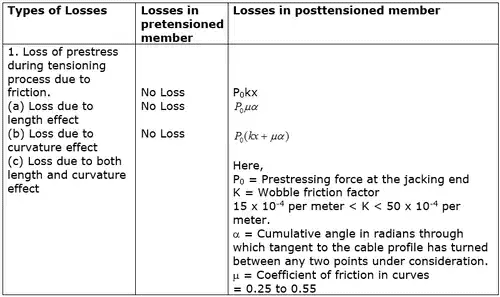