The document Notes | EduRev is a part of the NEET Course Physics 28 Years Past year papers for NEET/AIPMT Class 12.
All you need of NEET at this link: NEET 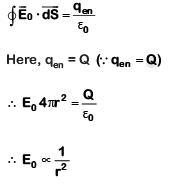 Q.2. Two parallel infinite line charges with linear charge densities +λ C/m and λl C/m are placed at a distance of 2R in free space. What is the electric field mid-way between the two line charges?     (2019)A: ZeroB:

Electric field due to line charge (1)

Electric field due to line charge (2)

If 25% of charge of A transferred to B then

Q.4. An electron falls from rest through a vertical distance h in a uniform and vertically upward directed electric field E. The direction of electrical field is now reversed, keeping its magnitude the same. A proton is allowed to fall from rest in through the same vertical distance h. The time fall of the electron, in comparison to the time fall of the proton is :-      (2018)A: smallerB: 5 times greaterC: 10 times greaterD: equalAnswer: ASolution:

Q.5. A toy car with charge q moves on a frictionless horizontal plane surface under the influence of a uniform electric field

Due to the force 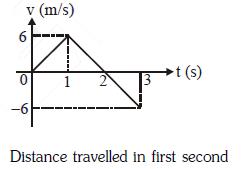 Q.6. Two identical charged spheres suspended from a common point by two mass less strings of lengths ℓ are initially at a distance d(d << ℓ) a part because of their mutual repulsion. The charges begin to leak from both the spheres at a constant rate. As a result, the spheres approach each other with a velocity v. Then v varies as a function of the distance x between the spheres, as :    (2016)
A: v ∝ x-1B: v ∝ x1/2C: v ∝ xD: v ∝ x-1/2Answer: DSolution: 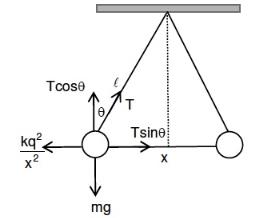 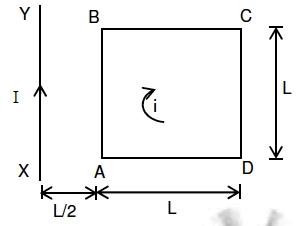 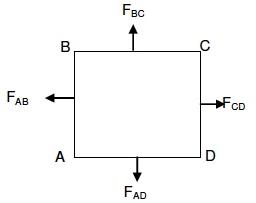 Q.8. The electric field in a certain region is acting radially outward and is given by E = Ar. A charge contained in a sphere of radius = a centred at the origin of the field, will be given by :     (2015)A:

Q.9. A wire carrying current I has the shape as shown in the adjoining figure. Linear parts of the wire are very long and parallel to X  -axis while semicircular portion of radius R is lying in a Y-Z plane. The magnetic field at point O is.     (2015)A:

Answer: CSolution: The magnetic fiedl in the different regions is given by 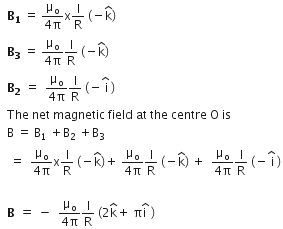 Q.10. An electron moving in a circular orbit of radius r makes n rotations per second. The magnetic field produced at the centre has magnitude :     (2015)A:

Which configuration has highest net magnetic dipole moment?     (2014)A:

Answer: CSolution: The direction of magnetic moment is from S to N