The document Previous Year Questions (2016-19) -Breathing and Exchange of Gases Notes | EduRev is a part of the NEET Course Biology Class 11.
All you need of NEET at this link: NEET

Q.1. Select the correct events that occur during inspiration.     [2020](i) Contraction of diaphragm(ii) Contraction of external inter costal muscles(iii) Pulmonary volume decreases(iv) Intra pulmonary pressure increases(a) (i), (ii) and (iv)(b) Only (iv)(c) (i) and (ii)(d) (iii) and (iv)Ans. (c)Solution: Inspiration is initiated by contraction of diaphragm which increases volume of thoracic chamber in antero-posterior axis and contraction of external inter –costal muscles which lifts up the ribs and sternum causing increases in volume of thoracic chamber in dorsoventral axis. 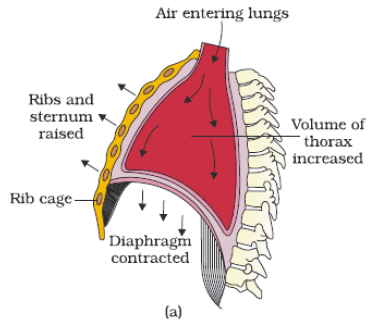 In the tissues, where low pO2, high pCO2, high H+ concentration and higher temperature exist, the conditions are favourable for dissociation of oxygen from the oxyhaemoglobin.Q.3. Tidal Volume and Expiratory Reserve Volume of an athlete is 500 mL and 1000 mL respectively. What will be his expiratory capacity if the residual volume is 1200 mL?    [2019](a) 2700 mL(b) 1500 mL(c) 1700 mL(d) 2200 mLAns. (b)Solution: Expiratory capacity is the total volume of air a person can expire after normal inspiration. It includes tidal volume and expiratory reserve volume.EC = TV + ERV = 500 + 1000 = 1500 mLQ.4. Due to increasing air-borne allergens and pollutants, many people in urban areas are suffering from a respiratory disorder that causes wheezing due to    [2019](a) Reduction in the secretion of surfactant by pneumocytes(b) Benign growth on the mucous lining of the nasal cavity(c) Inflammation of bronchi and bronchioles(d) Proliferation of fibrous tissues and damage of the alveolar walls.Ans. (c)Solution: Allergens cause bronchial asthma that stimulates the release of histamine from mast cells Symptoms of bronchial asthma are coughing wheezing (breathing noisily), difficulty in breathing due to inflammation of bronchi and bronchioles.Q.5. Select the correct statement.    [2019](a) Expiration occurs due to external intercostal muscles (b) Intrapulmonary pressure is lower than the atmospheric pressure during inspiration. (c) Inspiration occurs when atmospheric pressure is less than intrapulmonary pressure. (d) Expiration is initiated due to the contraction of the diaphragm.Ans. (b)

Emphysema is a chronic disorder in which abnormal distension of the bronchioles or alveolar sacs of the lungs occurs due to which respiratory surface is decreased for the exchange of oxygen and carbon dioxide.Q.7. Match the items given in column I with those in column II and select the correct option given below.    [2018]

Ans. (b)Q.8. Which of the following is an occupational respiratory disorder?   [2018](a) Anthracis (b) Silicosis (c) Botulism (d) EmphysemaAns. (b)Solution: Occupational respiratory disorders are due to the occupation of the individual. Silicosis is an occupational disease that occurs due to the excessive inhalation of silica dust by the workers of mining industry. Long exposure can cause proliferation of fibrous connective tissue (fibrosis) of upper part of lungs causing inflammation.

Anthrax and botulism are bacterial diseases of humans caused by Bacillus anthracis and Clostridium botulinum respectively.

Emphysema is abnormal distension of the bronchioles or alveolar sacs of the lungs.Q.9. Lungs are made up of air-filled sacs, the alveoli. They do not collapse even after forceful expiration, because of    [2017](a) Inspiratory reserve volume(b) Tidal volume(c) Expiratory reserve volume(d) Residual volume.Ans. (d)Solution: Residual volume is the volume of air which remains in the lungs after the most forceful expiration. This residual air enables the lungs to continue exchange of gases even after maximum exhalation. Due to this, lungs do not collapse even after forceful expiration.Q.10. The partial pressure of oxygen in the alveoli of the lungs is    [2016](a) Equal to that in the blood(b) More than that in the blood(c) Less than that in the blood(d) Less than that of carbon dioxide.Ans. (b)Solution: The partial pressure of oxygen in alveolar air is 104 mmHg whereas it is 40 mmHg in deoxygenated blood and 95 mmHg in oxygenated blood.Q.11. Lungs do not collapse between breaths and some air always remains in the lungs which can never be expelled because    [2016](a) There is a negative pressure in the lungs(b) There is a negative intrapleural pressure pulling at the lung walls(c) There is a positive intrapleural pressure(d) Pressure in the lungs is higher than the atmospheric pressure.Ans. (b)Solution: Intrapleural pressure is the pressure of air within the pleural cavity. Intrapleural pressure is always negative, which acts like suction to keep the lungs inflated and prevent them from collapsing. The negative intrapleural pressure is due to three main factors: surface tension of the alveolar fluid, elasticity of lungs, elasticity of thoracic wall.Normally, there is a difference between intrapleural and intrapulmonary pressure, which is called transpulmonary pressure. This transpulmonary pressure creates the suction to keep the lungs inflated. If there is no pressure difference, there is no suction and lungs will collapse.Q.12. Reduction in pH of blood will    [2018](a) Decrease the affinity of haemoglobin with oxygen. (b) Release bicarbonate ions by the liver(c) Reduce the rate of heartbeat(d) Reduce the blood supply to the brain.Ans. (a)Solution: Reduction in pH of blood causes oxygen haemoglobin dissociation curve to shift to right which indicates dissociation of oxygen from haemoglobin. This decreases affinity of haemoglobin for oxygen.Q.13. Name the chronic respiratory disorder caused mainly by cigarette smoking.    [2016](a) Respiratory acidosis(b) Respiratory alkalosis(c) Emphysema(d) AsthmaAns. (c)Solution: Emphysema is a chronic obstructive pulmonary disease (COPD) caused due to cigarette smoking. It is inflation or abnormal distention of the bronchioles or alveolar sacs of the lungs which causes irreversible distension and loss of elasticity in the walls of alveolar sacs of the lungs.Q.14. Asthma may be attributed to    [2016](a) Inflammation of the trachea(b) Accumulation of fluid in the lungs(c) Bacterial infection of the lungs(d) Allergic reaction of the mast cells in the lungs.Ans. (d)Solution: Asthma is an allergic condition in which the tissue surrounding the bronchioles of the lungs swell up and compress the bronchioles, thus causing difficulty in breathing. This allergy mainly involves IgE antibodies and chemicals like histamine anti serotonin from the mast cells.Q.15. Cytochromes are found in:    [2015](a) Outer wall of mitochondria(b) Cristae of mitochondria(c) Lysosomes(d) Matrix of mitochondriaAns. (b)Solution: Cytochromes are found in mitochondria. These are located on the inner membrane of mitochondria and are related with phosphorylation. 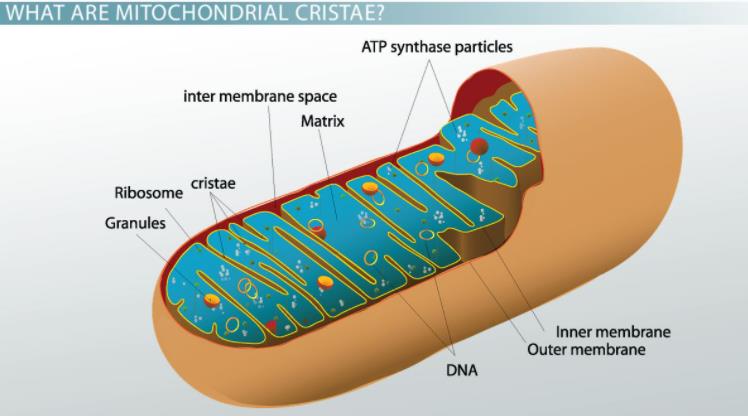 Q.16. When you hold your breath, which of the following gas changes in blood would first lead to the urge to breathe?    [2015](a) Rising CO2 concentration(b) Falling CO2 concentration(c) Rising CO2 and falling O2 concentration(d) Falling O2 concentrationAns. (a)Solution: Chemoreceptors in the medulla get stimulated by increase in CO2 concentration in the blood of arteries. Decrease in O2 concentration has no significant effect on chemoreceptors.Q.17. Name the pulmonary disease in which alveolar surface area involved in gas exchange is drastically reduced due to damage in the alveolar walls.    [2015](a) Emphysema(b) Pneumonia(c) Asthma(d) PleurisyAns. (a)Solution: In the disease, emphysema, alveolar surface area is reduced due to destruction of alveolar walls.Q.18. Approximately seventy per cent of carbon dioxide absorbed by the blood will be transported to the lungs:    [2014](a) As bicarbonate ions(b) In the form of dissolved gas molecules(c) By binding to R.B.C.(d) As carbamino - haemoglobinAns. (a) Solution: CO2 from the respiratory tissues to the lungs is transported by the blood in 3 ways:(i) In dissolved state or as a physical solution: Very small amount physically dissolved in plasma (7% i.e. ≌ 0.3 ml of CO2 by every 100 ml of blood).

(ii) Bicarbonate ions: ≌ 70% (i.e.≌ 2.5 ml per 100 ml of blood) CO2 diffuses in plasma & then into RBCs where it (in the presence of carbonic anhydrase) combines with H2O to form carbonic acid which is almost spontaneously dissociated into hydrogen ion and bicarbonate ions.