Q.1. Given below are two statements: one is labelled as Assertion and the other is labelled as Reason.     (2022)Assertion: Osteoporosis is characterised by decreased bone mass and increased chances of fractures. Reason: Common cause of osteoporosis is increased levels of estrogen. In the light of the above statements, choose the most appropriate answer from the options given below: (a) Both Assertion and Reason are correct but Reason is not the correct explanation of Assertion. (b) Assertion is correct but Reason is not correct (c) Assertion is not correct but Reason is correct (d) Both Assertion and Reason are correct and Reason is the correct explanation of Assertion.Ans. (b)Solution. Osteoporosis is characterised by decreased bone density and mass. This makes the bones prone to fracture. So, the Assertion is correct. In women undergoing menopause, a decrease in estrogen levels is responsible for osteoporosis. But non only this factor even the intake of many drugs, less calcium levels, and stress acts in causing osteoporosis So, the Reason is wrong.

Muscular dystrophy: Progressive degeneration of skeletal muscle mostly due to genetic disorder.Tetany: Rapid spasms (wild contractions) in muscle due to low Ca++ in body fluid.Arthritis: Inflammation of joints.Osteoporosis: Age-related disorder characterised by decreased bone mass and increased chances of fractures. Decreased levels of estrogen is a common cause.Gout: Inflammation of joints due to accumulation of uric acid crystals.Q.3. Match List-I with List-II     (2021) 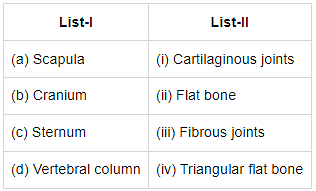 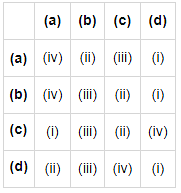 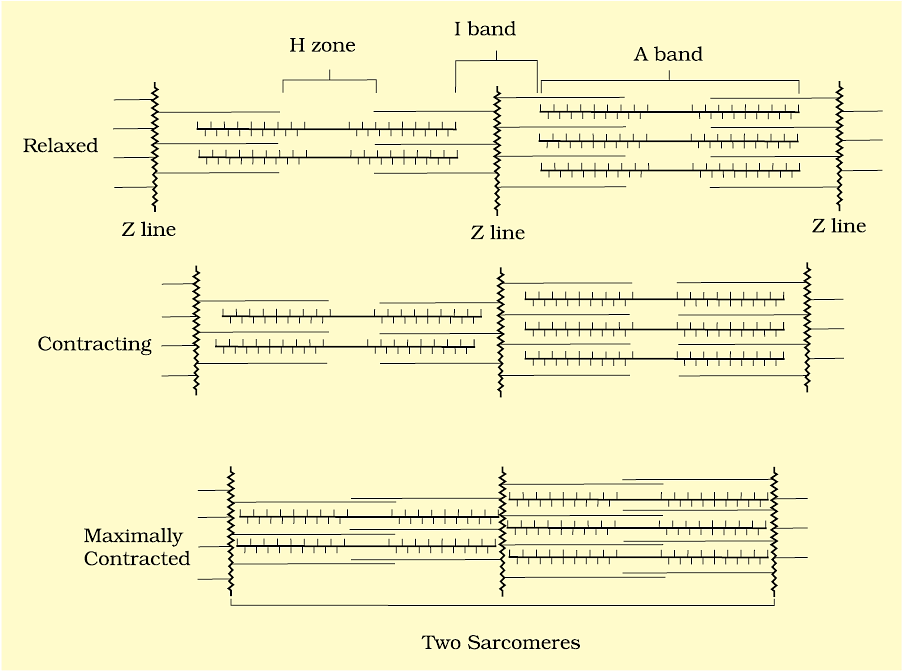 Ans. (b)Solution.(a) There are 12 pairs of ribs. Each rib is a thin flat bone connected dorsally to the vertebral column and ventrally to the sternum. Last 2 pairs (11th and 12th) of ribs are not connected ventrally and are therefore, called floating ribs.(b) & (c) Scapula is a large triangular flat bone situated in the dorsal part of the thorax between the second and the seventh ribs. The dorsal, flat, triangular body of scapula has a slightly elevated ridge called the spine which projects as a flat, expanded process called the acromion. The clavicle (collar bone) articulates with this.(d) Below the acromion is a depression called the glenoid cavity which articulates with the head of the humerus to form the shoulder joint.Q.6. Which of the following muscular disorders is inherited?    (2019)(a) Botulism(b) Tetany(c) Muscular dystrophy(d) Myasthenia gravisAns. (c)Solution.Musculardys trophy is a group of muscle diseases, marked by weakness and wasting of selected muscles, in which there is a recognizable pattern of inheritance. 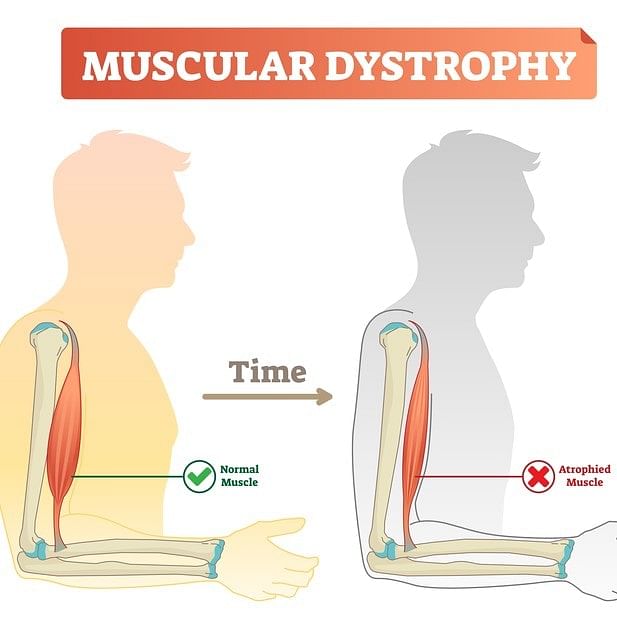 In this disorder, the mutated gene on middle of the short arm of X - chromosome is unable to produce a protein dystrophin in skeletal muscles. It is common in males, female heterozygous carriers are normal.Q.7. Select the correct option.    (2019)(a) There are seven pairs of vertebrosternal, three pairs of vertebrochondral and two pairs of vertebral ribs.(b) 8th, 9th and 10th pairs of ribs articulate directly with the sternum.(c) 11th and 12th pairs of ribs are connected to the sternum with the help of hyaline cartilage.(d) Each rib is a flat thin bone and all the ribs are connected dorsally to the thoracic vertebrae and ventrally to the sternum.Ans. (a)Solution.Ribs 1 - 7 are classified as (meribs (vertebrosternal ribs), ribs 8-10 are false ribs (vertebrochondral ribs) and ribs 11 and 12 are floating ribs (vertebral ribs).Q.8. Match the following joints with the bones involved:

Select the correct option from the following:    (2019)(a) (1)-(iii), (2)-(iv), (3)-(ii), (4)-(i) (b) (1)-(iv), (2)-(i), (3)-(ii), (4)-(iii) (c) (1)-(iv), (2)-(ii), (3)-(iii), (4)-(i) (d) (1)-(i), (2)-(iii), (3)-(ii), (4)-(iv)Ans. (a)Q.9. Calcium is important in skeletal muscle contraction because it    (2018)(a) Binds to troponin to remove the masking of active sites on aclin for myosin(b) Activates the myosin ATPase by binding to it(c) Detaches the myosin head from the actin filament(d) Prevents the formation of bonds between the myosin cross bridges and the aclin filament.Ans. (a)Solution.Calciumion plays an important role in skeletal muscle contraction. Muscle contraction is initiated by signal sent by the central nervous system. The neural signal further spreads through the muscle fibre and causes the release of calcium ions. Increase in calcium ion levels lead to the binding of calcium with a subunit of troponin on actin filaments and thereby remove the masking of active sites for myosin.Q.10. The pivot joint between atlas and axis is a type of     (2017)(a) Cartilaginous joint(b) Synovial joint(c) Saddle joint(d) Fibrous joint.Ans. (b)Solution. The pivot joint is a type of synovial joint. Synovial joints allow considerable movement. Fibrous joints do not allow any movement, cartilaginous joints allow only limited movements.Q.11. Out of ‘X ’ pairs of ribs in humans only ‘Y' pairs are true ribs. Select the option that correctly represents values of  X and Y and provides their explanation.    (2017)

Ans. (d)Solution. In human, 12 pairs of ribs are present in which 7 pairs of ribs (1st to 7th pairs) are attached dorsally to vertebral column and ventrally to the sternum.Q.12. Name the ion responsible for unmasking of active sites for myosin for cross-bridge activity during muscle contraction.    (2016)(a) Calcium(b) Magnesium(c) Sodium(d) PotassiumAns. (a)Solution.Calciumion plays an important role muscle contraction. Calcium ions bind to troponin causing a change in its shape and position. Thus in turn alters shape and position of tropomyosin to which troponin binds. This shift exposes the active sites on F-actin molecules. Myosin cross-bridge are then able to bind to these active sites.Q.13. Osteoporosis, an age-related disease of skeletal system, may occur due to    (2016)(a) Immune disorder affecting neuromuscular junction leading to fatigue(b) High concentration of Ca++ and Na+ (c) Decreased level of estrogen(d) Accumulation of uric acid leading to inflammation of joints.Ans. (c)Solution.Osteoporosis is reduction in bone mineral density, resulting in bones that are brittle and liable to fracture. Infection, injury and synovitis can cause localised osteoporosis of adjacent bone, Generalised osteoporosis is common in the elderly and in women after menopause. After menopause the estrogen levels in blood plasma are much reduced. Estrogen helps to regulate bone cells called osteoclasts which are responsible for building new bone. When estrogen levels drop fewer osteoclasts are produced resulting in osteoporosis.Q.14. Lack of relaxation between successive stimuli in sustained muscle contraction is known as     (2016)(a) Spasm(b) Fatigue(c) Tetanus(d) Tonus Ans. (c)Solution.Sustained contraction with no relaxation phase is called muscle tetanus.

Q.19. Select the correct matching of the type of the joint with the example in human skeletal system:    (2014)Type of joint Example(a) Cartilaginous joint between frontal and pariental(b) Pivot joint between third and fourth cervical vertebrae(c) Hinge joint between humerus and  pectoral girdle(d) Gliding joint between carpalsAns. (d) Solution.A gliding joint is a common type of synovial joint formed between bones that meet at flat or nearly flat articular surfaces. Gliding joints allow the bones to glide past one another in any direction along the plane of the joint - up and down, left and right, and diagonally. Many gliding joints are formed in the appendicular skeleton between the carpal bones of the wrist; between the carpals and the metacarpals of the palm; between the tarsal bones of the ankle; and between the tarsals and the metatarsals of the foot.