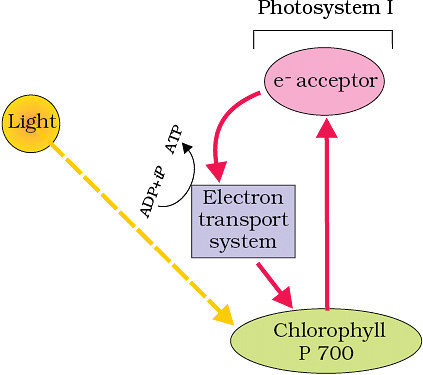 Q.3. The oxygenation activity of RuBisCo enzyme in photorespiration leads to the formation of:     [2020](a) 1 molecule of 6-C compound(b) 1 molecule of 4-C compound and 1 molecule of 2-C compound(c) 2 molecules of 3-C compound(d) 1 molecule of 3-C compoundAns. (d)Solution: Photorespiration is the light dependent process. At high temperature, RuBP carboxylase functions as oxygenase and instead of fixing carbon dioxide (C3 cycle), oxidises ribulose 1, 5-biphosphate to produce a 3-carbon phosphoglyceric acid and a 2-carbon phosphoglycolate.Q.4. In light reaction, plastoquinone facilitates the transfer of electrons from:     [2020](a) PS-I to NADP+(b) PS-I to ATP synthase(c) PS-II to Cytb6f complex(d) Cytb6complex to PS-IAns. (c)Solution: In non cyclic photophosphorylation, Plastoquinone obtained from PS-II transfer to cyt b6-f complex.Q.5. One scientist cultured Cladophora in a suspension of Azotobacter and illuminated the culture by splitting light through a prism. He observed that bacteria accumulated mainly in the region of:    [2019](a) Violet and green light(b) Indigo and green light(c) Orange and yellow light(d) Blue and red lightAns. (d)

T.W. Engelmann split light into its spectral components and detected that aerobic bacteria accumulated mainly in the region of blue and red light of the split spectrum.Q.6. Which of the following is not a product of light reaction of photosynthesis?     [2018](a) ATP(b) NADH(c) NADPH(d) OxygenAns. (b)Solution: In light reaction of photosynthesis, ATP, NADPH and oxygen are produced. NADPH participates in anabolic reactions (e.g., photosynthesis) that consume energy in order to build up larger molecules. NADH participates in catabolic reactions (e.g., respiration) that break down molecules to release energy.Q.7. With reference to factors affecting the rate of photosynthesis, which of the following statements is not correct?    [2017](a) Increasing atmospheric CO2 concentration up to 0.05% can enhance CO2 fixation rate.(b) C3 plants respond to higher temperature with enhanced photosynthesis while C4 plants have much -lower temperature optimum.(c) Tomato is a greenhouse crop which can be grown in CO2-enriched atmosphere for higher yield.(d) Light saturation for CO2 fixation occurs at 10% of full sunlight.Ans. (b)Solution: C4 plants respond to higher temperature with enhanced photosynthesis while C3 plants have lower temperature optimum.Q.8. Phosphoenol pyruvate (PEP) is the primary CO2 acceptor in    [2017](a) C4 plants(b) C2 plants(c) C3 and C4 plants(d) C3 plants.Ans. (a)

Solution: PEP stands for phosphoenolpyruvate. It acts as a primary acceptor in the case of C4 plants and gets converted to oxaloacetate.

In C3 plants, ribulose biphosphate acts as a primary acceptor and gets converted into phosphoglycerate (PGA).

C2 cycle is a photorespiratory cycle where due to the excessive oxygen concentration major site of Rubisco is occupied by it, which leads to decreased efficiency of Rubisco to combine with carbon dioxide.

Q.9. The process which makes major difference between C3 and C4 plants is     [2016](a) Glycolysis(b) Calvin cycle(c) Photorespiration(d) RespirationAns. (c)Solution: Photorespiration is the light-dependent process of oxygenation of ribulose biphosphate (RuBP) and release of carbon dioxide by the photosynthetic organs of a plant. It leads to oxidation of considerable amount of photosynthetic products to CO2 and PRO without the production of useful energy.

Photorespiration occurs only in C3 plants because at high temperature and high oxygen concentration RuBP carboxylase changes to RuBP oxygenase. Photorespiration is absent in C4 plants. Peroxisome and mitochondria are required for completing the process. 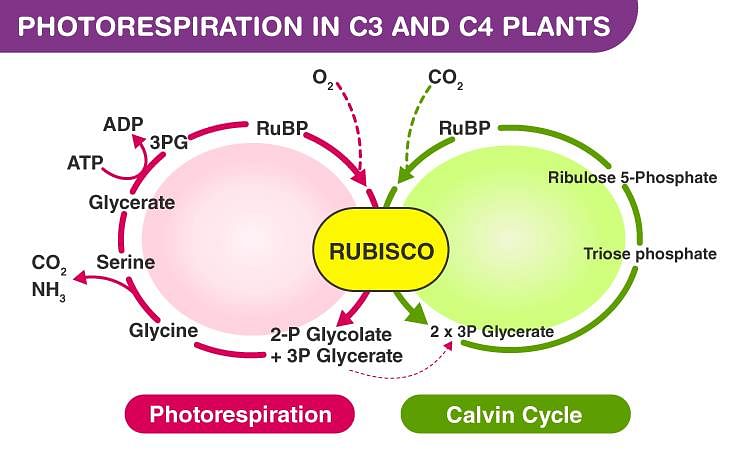 Q.10. Water vapour comes out from the plant leaf through the stomatal opening. Through the same stomatal opening, carbon dioxide diffuses into the plant during photosynthesis. Reason out the above statements using one of following options:    [2016](a) The above processes happen only during night time.(b) One process occurs during day time and the other at night.(c) Both processes cannot happen simultaneously.(d) Both processes can happen together because the diffusion coefficient of water and CO2 is different.Ans. (d)

Solution: Diffusion of water vapour and CO2 are independent process. Their diffusion depends on the difference in their partial pressure in the atmosphere as well as inside the leaves.Q.11. In a chloroplast, the highest number of protons are found in    [2016](a) Intermembrane space(b) Antennae complex(c) Stroma(d) Lumen of thylakoidsAns. (d)

Solution: According to chemiosmotic hypothesis, ATP synthesis is linked to the development of a proton gradient across the membrane of the thylakoid. The splitting of the water molecule takes place on the inner side of the membrane and so the hydrogen ions (protons) that are produced, they accumulate within the lumen of the thylakoids. So, the highest number of protons are found in lumen of thylakoids in chloroplast.Q.12. Emerson’s enhancement effect and Red drop have been instrumental in the discovery of    [2016](a) Photophosphorylation and cyclic electron transport(b) Oxidative phosphorylation(c) Photophosphorylation and non-cyclic electron transport(d) Two photosystems operating simultaneouslyAns. (d)Solution: Emerson et al. (1957) found that if light of shorter wavelengths was provided at the same time as the longer red wavelengths, photosynthesis was even faster than the sum of the two rates with either colour alone. This synergism or enhancement became known as the Emerson enhancement effect.

The two photosystems normally cooperate to cause photosynthesis at all wavelengths shorter than 690 nm, because both photosystems absorb those wavelengths. The importance of Emerson’s work is that it suggested the presence of two distinct photosystems.Q.13. A plant in your garden avoids photorespiratory losses, has improved water use efficiency, shows high rates of photosynthesis at high temperatures and has improved efficiency of nitrogen utilisation. In which of the following physiological groups would you assign this plant? [2016](a) CAM(b) Nitrogen fixer(c) C3(d) C4Ans. (d)

This plant is a C4 plant. C4 plants are special as they have a special type of leaf anatomy called Kranz Anatomy. They can tolerate higher temperatures, they show a response to high intensities of light, they lack a wasteful process called photorespiration and they have improved efficiency of nitrogen utilization. Most of the plants that are adapted to dry tropical regions have the C4 pathway and are known as C4 plants. In these plants, double fixation of carbon dioxide occurs.

Q.14. Emerson's enhancement effect and Red drop have been instrumental in the discovery of    [2016](a) Photophosphorylation and non-cyclic electron transport(b) Two photosystems operating simultaneously(c) Photophosphorylation and cyclic electron transport(d) Oxidative phosphorylationAns. (b)Solution: Wavelengths beyond 700nm are apparently of insufficient energy to drive any part of photosynthesis. So a huge drop in efficiency has been noticed at 700nm. This phenomenon is called as "Red drop effect". In other words, there is a sharp decrease in quantum yield at wavelengths greater than 680nm. The number of oxygen molecules released per light quanta absorbed is called a quantum yield of photosynthesis. This effect was, first of all noticed by Robert Emerson.

Later on, Emerson and his group observed that if chlorella plants are given the inefficient far-red light and red light of shorter wavelengths in alternate fashion, the quantum yields were greater than could be expected from adding the rates found when either color was provided alone. This synergistic effect or enhancement is known as EEE or "Emerson Enhancement Effect". This was the first good evidence that there are two photosystems, one absorbs far-red light and other red light and both of them must operate to drive photosynthesis most effectively.Q.15. Water-soluble pigments found in plant cell vacuoles are  [2016] (a) Xanthophylls(b) Chlorophylls(c) Carotenoids(d) AnthocyaninsAns. (d)Solution: Many leaves produce water-soluble vacuolar pigments, which are stored within cell vacuoles (microscopic water sacs within each cell). Two major classes of leaf vacuolar pigments are anthocyanins and betalains.Q.16. The structures that are formed by stacking of organized flattened membranous sacs in the chloroplasts are:    [2015](a) Grana(b) Stroma lamellae(c) Stroma(d) CristaeAns. (a)Solution: In chloroplast which are green coloured plastids, thylakoids are arranged in stacks like the pile of coins called grana.

ChloroplastQ.17. Chromatophores take part in:    [2015](a) Growth(b) Movement(c) Respiration(d) PhotosynthesisAns. (d)Solution: Chromatophores play an important role in the process of photosynthesis. They contain pigments and are found in blue-green algae.Q.18. The oxygen evolved during photosynthesis comes from water molecules. Which one of the following pairs of elements is involved in this reaction?    [2015](a) Manganese and Potassium(b) Magnesium and Molybdenum(c) Magnesium and Chlorine(d) Manganese and ChlorineAns. (d)Solution: During photosynthesis photolysis of water is induced by Mn++ and CI– ionsQ.19. In photosynthesis, the light-independent reactions take place at:  [2015] (a) Photosystem-I(b) Photosystem-II(c) Stromal matrix(d) Thylakoid lumenAns. (c)Solution: In photosynthesis, light-independent reactions are known as dark reactions. They take place in the stromal matrix of chloroplast where all the enzymes required for the reaction are present. This process does not depend directly on the presence of light but is dependent on the products of light reaction i.e., ATP and NADPH. The dark reaction occur through Calvin cycle.

The photosynthetic bacteria are anaerobic. No oxygen is evolved in bacterial photosynthesis. Such type of photosynthesis is known as anoxygenic photosynthesis. Water is not used as a source of reducing power. Instead, hydrogen is obtained either directly or from various types of inorganic and organic compounds, e.g., H2S, aliphatic compounds.

The document NEET Previous Year Questions (2016-21): Photosynthesis Notes | Study Biology Class 11 - NEET is a part of the NEET Course Biology Class 11.
All you need of NEET at this link: NEET
Join Course