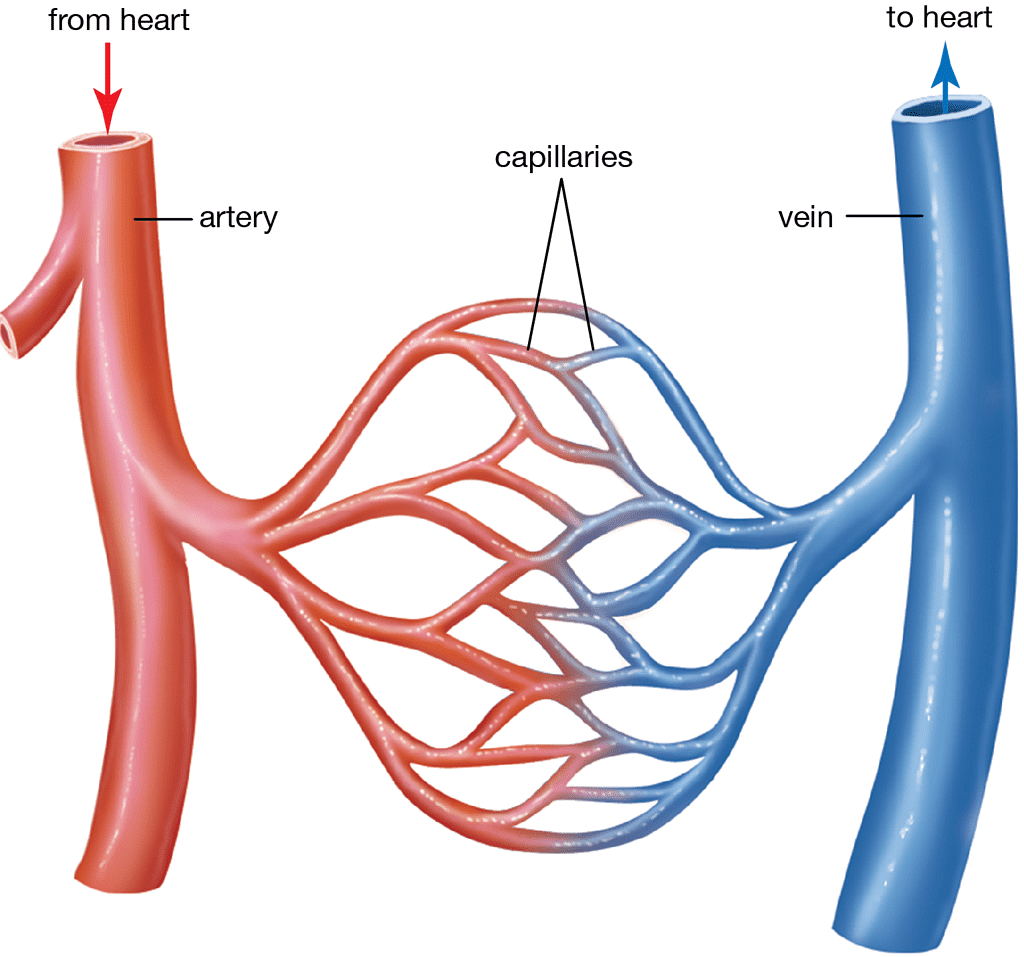 Their functions are tabulated below:

Q.2. How does blood clotting occur?Ans. Blood clotting is a phenomenon brought about by blood platelets that prevent excessive loss of blood at the time of injury or leakage from a blood vessel.Platelets rupture to release a substance called thromboplastin 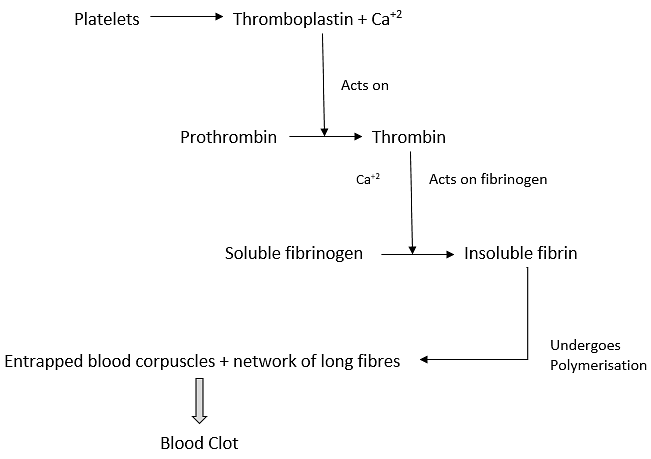 Q.4. Name the components of blood which transport: [CBSE 2016](i) Food, carbon dioxide and nitrogenous wastes(ii) OxygenAns. (i) Blood plasma(ii) EBCQ.5. Kings of cartilage are present in the trachea. Why? [CBSE 2016]Ans. From the nostril, the air passes through the pharynx into the lungs via the trachea. Incomplete C-shaped rings of cartilage are present in the trachea which ensure that the air passage does not collapse when there is no air in it.Q.6. When a sportsman runs, he gets muscle cramps. Why? [CBSE 2016]Ans. During running, the sportsman requires a large amount of energy instantly. In order to release more energy, pyruvate is converted into lactic acid in the absence of oxygen. Accumulation of lactic acid in the muscles causes cramps.Q.7. (i) Name the respiratory pigment found in human beings. (ii) How is carbon dioxide transported in our body? [CBSE 2016]Ans. (i) Haemoglobin(ii) Generally diffused in blood plasma, as carbonate ions and as carbaminohaemoglobin.Q.8. (i) Name two organisms that obtain food through parasitic nutritive strategy. (ii) How do fungi obtain their food?    [CBSE 2016]Ans. (i) Cuscuta, tapeworm obtain food through parasitic nutritive strategy.(ii) Fungi are saprophytic and obtain food through dead and decaying matter.Q.9. (a) Name the following : (i) The three-carbon molecule that is formed due to the breakdown of glucose during respiration. (ii) The nitrogenous waste that is removed from the blood in our kidneys. (b) How do unicellular organisms generally remove waste? [CBSE 2016]Ans.  (a) (i) Pyruvic Acid/Pyruvate (ii) Urea(b) The undigested food material in the vacuole reaches the rear end of the organism and is thrown out by the process of exocytosis. The membrane of the vesicle fuses with the surface membrane.Q.10. Differentiate between aerobic and anaerobic respiration. [CBSE 2016]Ans.

Q.11. Explain how are the fats digested in our bodies? Where does this process take place? [CBSE 2011,2016]Ans.  Fats are digested in the small intestine. When food enters the small intestine bile juice secreted by the liver emulsifies fat and then the enzyme lipase which is secreted by the pancreas converts fat into fatty acid and glycerol.Q.12. Explain why is transportation of materials necessary in animals?   [CBSE 2016] Ans.

Q.13. Mention the three kinds of cells present in the blood. Write one function of each. [CBSE 2016]Ans. Blood is made up of plasma and corpuscles.Three kinds of cells are: WBC, RBC and Blood platelets.Red Blood cells (RBC) are small, biconvex cells that contain haemoglobin to transport O2 from the lungs to the body cells and CO2 from body cells to the lungs.White blood cells (WBC) main function is defence of the body against diseases and other infection. Blood platelets are responsible for the clotting of blood during injuries.Q.14. Write one function of each of the following components of the transport system in human beings:    [CBSE 2016](a) Blood vessels (b) Lymph (c) Heart Ans. The function of the following components of the transport system in human beings are as follows:(a) Blood vessels: There are three types of blood vessels of different sizes involved in blood circulation viz. arteries, veins and capillaries, which are all connected to form a continuous closed system.(b) Lymph: It carries digested and absorbed fat from the intestine and drains excess fluid from extracellular space back into the blood.(c) Heart: It is a pumping organ that receives blood from the veins and pumps it into the arteries.Q.15. Give reason: (l) Fine hair and mucus are present in the nasal passage. (ii) Rings of cartilage are present in the throat. [CBSE 2015]Ans. (i) Fine hair and mucus are present in the nasal passage so that any dust particles, pathogens etc., can be trapped in here and only clean air will enter the lungs. This is one of the defence mechanism of our body.(ii) Rings of cartilage are present in the throat so that the trachea does not collapse on respiration.Q.16. Define the term parasite. Name one plant parasite and one animal parasite. Some organisms break down the food material outside the body and then absorb it. Give two examples. [CBSE 2015]Ans. Parasites are organisms that obtain nutrients from the body of other living organisms and harm them as a result.(i) Plant parasite - cuscuta(ii) Animal parasite - TapewormOrganisms that break down food outside the body and then absorb it are saprophytes.Example: fungi, bacteria.Q.17. What do the following transport?     [CBSE 2015](i) Xylem(ii) Phloem(iii) Pulmonary vein(iv) Venacava(v) Pulmonary artery(vi) Aorta. Ans. Material transported by:(i) Xylem: Water and minerals.(ii) Phloem: Organic molecules like sucrose.(iii) Pulmonary vein: Oxygenated blood from lungs to heart.(iv) Venacava: Impure and deoxygenated blood from body to heart.(v) Pulmonary artery: Deoxygenated blood from the heart to lungs.(vi) Aorta: Oxygenated blood from the heart to body parts.Q.18. In single-celled organisms, diffusion is sufficient to meet all their requirements of food, exchange of gases or removal of wastes but it is not in the case of multicellular organisms. Explain the reason for this difference. [CBSE 2015]Ans. In the case of a single celled organism, the entire surface of the organism is in contact with the environment and hence no specific organ for taking in food, exchange of gases or removal of waste may be needed. In multicellular organisms, only the cells of the skin are in direct contact with the environment. Diffusion is a very slow process and it will take a very long time to reach all the cells of the body parts. Diffusion is insufficient to melt oxygen requirement.Q.19. State the role of the following in the human digestive system: [CBSE 2015](a) Digestive enzymes (b) Hydrochloric acid (c) Villi Ans. (a) Digestive enzymes digest the food we eat.(b) Hydrochloric acid creates an acidic medium to facilitate the action of enzyme pepsin.(c) Villi increases the surface area inside the small intestine to facilitate absorption of food.

Q.1. (a) Write the reaction that occurs when glucose breaks down anaerobically in yeast. (b) Write the mechanism by which fishes breathe in water. (c) Name the balloon likes structures present in the lungs. List its two functions. (d) Name the respiratory pigment and write its role in human beings. [CBSE 2017-18 C]Ans.  (a) Glucose breaks down anaerobically i.e., in absence o f O2; in yeast in the following manner:

(b) Since fishes are aquatic, they take in O2 dissolved in water. They take water through their mouth which goes to their gills where the dissolved oxygen is taken up by the blood and transported. The CO2 is given out through the same passage.

(c) The balloon-like structures in our lungs are the alveoli.Their functions are:

(d) The respiratory pigment is Haemoglobin.Its role is:

Q.2. (a) Name the process and explain the type of nutrition found in green plants. List the raw materials required for this process. Give the chemical equation for the mentioned process. (b) Write three events that occur during this process. [CBSE 2017-18 C]Ans. (a) The process of nutrition in green plants is Photosynthesis. The type of nutrition is autotrophic nutrition. Autotrophic nutrition requires sunlight, chlorophyll, water and carbon dioxide.Plants prepare their own food in the form of glucose which gets converted to starch. This is done using CO2 and H2O which gets fixed using energy from sunlight by the chlorophyll molecule present in green plants.Equation -

(b) The three events involved are:

(b) If there is a leak in the blood vessels due to injury, then the blood platelets help plug these leaks. The platelets make the clot by forming a mesh-like structure over the leak in which other blood cells get entangled ultimately plugging the leak.Q.4. (a) Name the process and explain the type of nutrition found in green plants. List the raw materials required for this process. Give a Chemical equation for the mentioned process. (b) Write three events that occur during this process.    [CBSE 2018C]Ans. (a) Photosynthesis is the process where green plants show autotrophic nutrition. The raw materials required for photosynthesis are carbon dioxide and water and energy in the form of sunlight.The equation is as follows:

(b) The three events in photosynthesis are:

Q.5. (a) Write the reaction that occurs when glucose breaks down anaerobically in yeast. (b) Write the mechanism by which fishes breathe in water. (c) Name the balloon likes structures present in the lungs. List its two functions. (d) Name the respiratory pigment and write its role in human beings. [CBSE 2018C]Ans. (a)

(b) Fishes breathe with the gills by diffusion.(c) Alveoli are the balloon-like structures:

(d) Haemoglobin is the respiratory pigment in humans. It transports a major part of oxygen and some amount of carbon dioxide through blood.Q.6. (a) Mention any two components of blood.

(b) Trace the movement of oxygenated blood in the body.

(c) Write the function of valves present in between atria and ventricles.

(d) Write one structural difference between the composition of artery and veins. [CBSE 2018]Ans. (а) Blood is composed of plasma and three types of cells-Red blood cells, white blood cells and platelets.(b)

(c) The valves prevent the backflow of blood from ventricles into the atria.

(b) Name the basic filtration unit present in the kidney.

Ans. (a) Excretion is the biological process of removal of harmful metabolic wastes from the body. 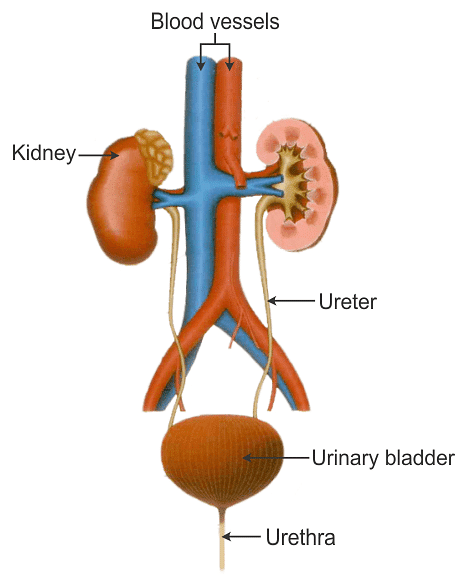 Q.8. Draw diagram of human alimentary canal and label the following:(i) Part in which starch digestion is initiated.(ii) Organ in which bile is stored.(iii) The gland that secretes digestive enzymes as well as hormones.(iv) Part of alimentary canal where water is reabsorbed.(v) Part of gut where finger like projections are present to facilitate absorption of digested food.     [CBSE 2016] 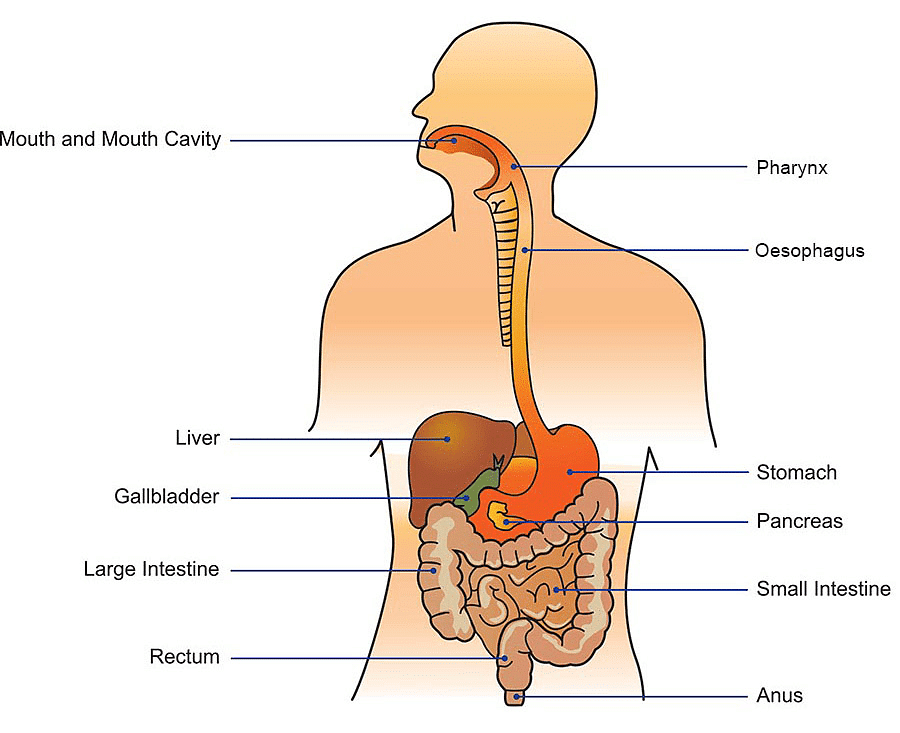 Q.9. (a) State the form in which the following are stored :

(i) Unused carbohydrates in plants.

(b) Describe the process of nutrition in the amoeba with the help of a diagram. [CBSE 2016]

Ans. (a) (i) As starch in fruits/storage roots tubers etc. (ii) As glycogen.