The document Previous Year Questions - Metals and Non-metals Class 10 Notes | EduRev is a part of the Class 10 Course Science Class 10.
All you need of Class 10 at this link: Class 10

Q 1. Explain the following:    [Delhi 2019](a) Sodium chloride is an ionic compound that does not conduct electricity in a solid state whereas it does conduct electricity in the molten and solid-state as well as in an aqueous solution.(b) Reactivity of aluminium decreases if it is dipped in nitric acid.(c) Metals like calcium and magnesium are never found in their free state in nature.

(b) It is due to the formation of an oxide layer on its surface which makes it passive (less reactive) HNO3 is a good oxidising agent.(c) It is because Mg and Ca are highly reactive, react with other elements to form compounds, therefore, are not found in a free state. 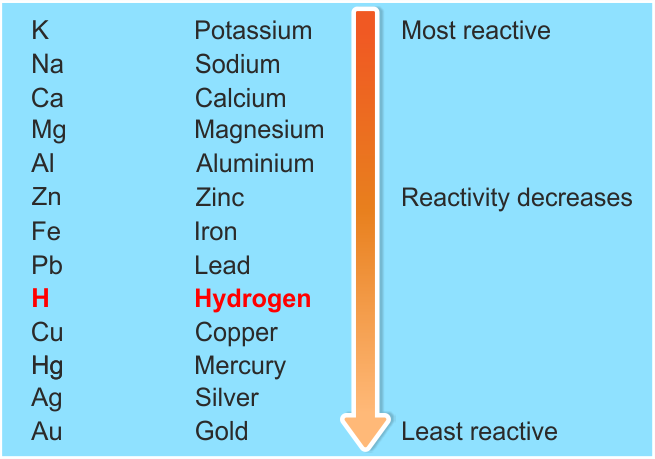 Q 3. Explain the following statements:    [CBSE 2016](a) Most metal oxides are insoluble in water but some of these dissolve in water. What are these oxides and their solutions in water called?(b) At ordinary temperature the surface of metals such as magnesium, aluminium, zinc, etc. is covered with a thin layer. What is the composition of this layer? State its importance.(c) Some alkali metals can be cut with a knife.

(a) Solution of metal oxides in water is called alkali (soluble base), e.g. sodium hydroxide (NaOH), potassium hydroxide (KOH).(b) This layer is an oxide layer. It makes the metal less reactive (passive) and makes it more useful because it cannot get corroded and remains as it is.(c) It is because these metals are very soft, e.g. sodium metal can be cut with a knife.

(a) Gold is the most malleable and ductile metal.(b) Silver is the best conductor, whereas lead is a poor conductor of heat.(c) Tungsten has the highest melting point, Mercury has the lowest melting point.

(a) Mercury is a metal, bromine is non-metal, liquid at room temperature.(b) Sodium is a very soft metal, diamond is a very hard non-metal.(c) Gallium has a low melting point, diamond has a very high melting point.

Q 6. State two properties of each of the following metals which make them suitable for:    [CBSE 2016](i) Copper and aluminium for making electric wires.(ii) Gold, platinum and silver are used to make jewellery.(iii) Copper to make hot water tank.

There is ionic bonding between sodium and chloride ions.

Q 8. Write the names and symbols of the constituents present in the following alloys     [CBSE 2016](a) Brass(b) Bronze(c) Solder

Cinnabar is HgSMercury is obtained by roasting cinnabar. HgO formed is thermally unstable and gives mercury.

Mercury can be purified by distillation.

Q 10. (a) Write the electron dot structures for potassium and chlorine.(b) Show the formation of KCI by the transfer of electrons.(c) Name the ions present in this compound, KCI.   [CBSE 2015] 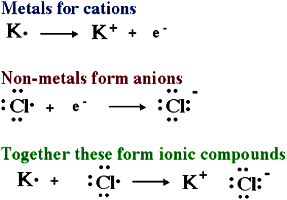 Q 11. State three reasons for the following facts:    [CBSE 2015](a) Sulphur is a non-metal(b) Magnesium is a metalOne of the reasons must be supported with a chemical equation.

It is because highly reactive metals themselves are stronger reducing agents than carbon.

Q 13. What happens when carbon dioxide is compressed in water at higher pressure?    [CBSE 2015]

Q 14. Write the chemical equation for the reaction taking place when steam is passed over hot aluminium.    [CBSE 2015]

Q 1. (a) Write the steps involved in the extraction of pure metals in the middle of the activity series from their carbonate ores.  (b) How is copper extracted from its sulphide ore? Explain the various steps supported by chemical equations. Draw a labelled diagram for the electrolytic refining of copper.    [CBSE 2018]

3. Purification is done by electrolytic refining. 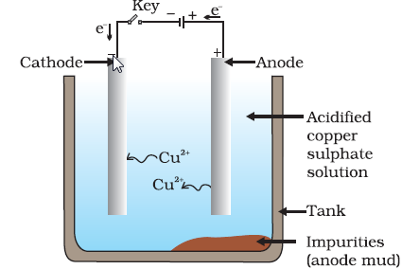 (b) Copper is found in nature as Cu2S. It can be obtained from the ore just by heating in air.

Electrolytic refining of copper is done as shown in the diagram here.

Q 2. Distinguish between metals and non-metals on the basis of (i) two physical and (ii) three chemical properties.    [CBSE 2018 for Blind] 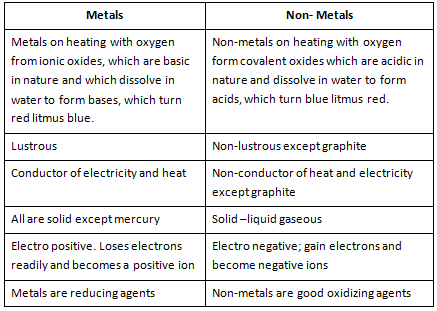 (a) It is a process in which a metal reacts with substances present in the air to form surface compounds.(b) Rusting.(c) Black layer on its surface due to formation of Ag2S.(d) It makes the metal weak and brittle, which is a serious problem.(e) Oiling, painting, greasing, galvanisation, alloying can prevent iron from corrosion.

Q 4. (a) Define corrosion, what name is given to the corrosion of iron?(b) Name the colour of the coating formed on silver and copper articles, when exposed to air?(c) List two damages caused by corrosion and suggest how corrosion can be prevented.    [CBSE 2016]

(a) When a metal is attacked by substances around it, such as moisture, acids, etc., it is said to corrode and this process is called corrosion. Corrosion of iron is called rusting.(b) Coating formed on silver is black and that formed on copper is green.(c) Damages caused by corrosion:

Q 5. Give reasons for the following:    [CBSE 2016](i) Carbonate and sulphide ores are usually converted into oxides during the process of extraction of metals.(ii) Ionic compounds have generally high melting points.(iii) Hydrogen is not a metal, but it has been assigned a place in the reactivity series of metals.(iv) The galvanised iron article is protected against rusting even if the zinc layer is broken.(v) The wires carrying current in homes have a coating of PVC.

(i) It is easier to convert metal oxides to metals as compared to carbonates and sulphides. Therefore carbonates are calcinated and sulphides are roasted to oxides.(ii) There are electrostatic forces of attraction between the cations and anions in ionic compounds which are difficult to break. Therefore ionic compounds have high melting points.(iii) Metals above hydrogen evolve hydrogen gas and metals below hydrogen do not evolve hydrogen when treated with an acid. That is when hydrogen has been assigned a place in the reactivity series of metals.(iv) Even if the zinc layer is broken, it will preferentially be oxidised because it is more reactive than iron.(v) The wires carrying current in homes have a coating of PVC. This is because PVC is an insulating substance and protects from electric shock.

Q 6. (a) Write electron dot structure for chlorine (At No. 17) and calcium (At No. 20). Show the formation of calcium chloride by the transfer of electrons.(b) Identify the nature of the above compound and explain the three physical properties of such compounds.    [CBSE2015]

(b) It is an ionic compound.Physical properties(i) It is hard and solid.(ii) It has high melting and boiling point.(iii) It is soluble in water.

Q 7. (a) Describe an activity to show that metals are good conductors of electricity.(b) Account for the following:(i) Hydrogen gas is not evolved when a metal reacts with nitric acid.(ii) For storing sodium metal, it is kept immersed in kerosene.(iii) The reaction of iron (III) oxide with aluminium is used to join cracked iron part machines.    [CBSE 2015]

(b) (i) This is because the hydrogen gas first evolved reacts with HNO3 to produce oxides of nitrogen.(ii) We cannot store it underwater because sodium reacts with water to produce hydrogen gas.2Na + 2H2O → 2NaOH + H2(iii) Fe2O3 + 2AI →  AI2O3 + 2Fe + HeatThis is an exothermic reaction. The molten iron is used to join the cracked iron parts of the machine.

Q 9. (a) In column I, there are given different methods of extraction. Name the methods used for the extraction of metals given in column II:

(b) Differentiate between roasting and calcination processes giving one example of each.    [CBSE2015] 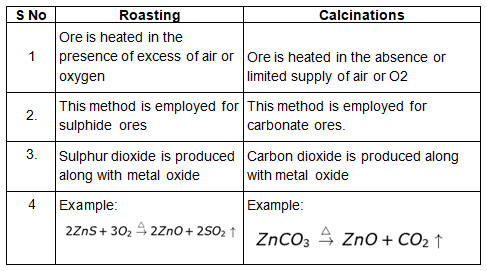 The nature of bonds in XY2 is ionic.Properties: