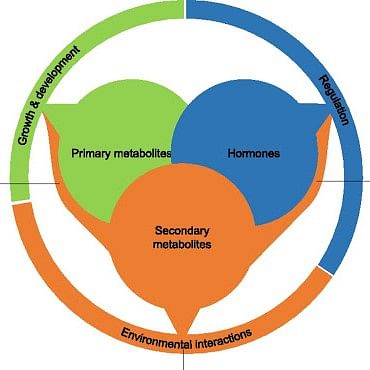 The most exciting aspect of chemistry deals with isolating thousands of compounds, small and big, from living organisms, determining their structure and if possible synthesising them. If one were to make a list of biomolecules, such a list would have thousands of organic compounds including amino acids, sugars, etc. We can call these biomolecules as ‘metabolites’. These are called primary metabolites. However, when one analyses plant, fungal and microbial cells, one would see thousands of compounds other than these called primary metabolites, e.g. alkaloides, flavonoides, rubber, essential oils, antibiotics, coloured pigments, scents, gums, spices. These are called secondary metabolites . While primary metabolites have identifiable functions and play known roles in normal physiologial processes, we do not at the moment, understand the role or functions of all the ‘secondary metabolites’ in host organisms. However, many of them are useful to ‘human welfare’ (e.g., rubber, drugs, spices, scents and pigments). Some secondary metabolites have ecological importance. In the later chapters and years you will learn more about this.

The document Primary & Secondary Metabolites Notes | Study Biology Class 11 - NEET is a part of the NEET Course Biology Class 11.
All you need of NEET at this link: NEET
Join Course