When two or more waves simultaneously pass through a point, the disturbance of the point is given by the sum of the disturbances each wave would produce in absence of the other wave(s). In case of wave on string disturbance means displacement, in case of sound wave it means pressure change, in case of electro-magnetic wave (E.M.W) it is electric field or magnetic field. Superposition of two light travelling in almost same direction results in modification in the distribution of intensity of light in the region of superposition. This phenomenon is called interference.

Consider superposition of two sinusoidal wave (having same frequency), at a particular point.

Ex.2 S1 and S2 are two source of light which produce individually disturbance at point P given by E1 = 3 sin wt, E2 = 4 cos wt. Assuming

to be along the same line, find the result of their superposition.

Interference implies super position of waves. Whenever two or more than two waves superimpose each other they give sum of their individual displacement.

Let the two waves coming from sources S1 & S2 be

When the two displacements are in phase, then the resultant amplitude will be sum of the two amplitude & Inet will be maximum, this is known of constructive interference.

For Inet to be maximum

When superposing waves are in opposite phase, the resultant amplitude is the difference of two amplitudes & Inet is minimum; this is known as destructive interference.

For Inet to be minimum, 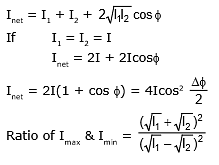 Ex.3 Light from two source, each of same frequency and travelling in same direction, but with intensity in the ratio 4 : 1 interfere. Find ratio of maximum to minimum intensity.

Ex.4 Find the maximum intensity in case of interference of n identical waves each of intensity I0 if the interference is (a) coherent and (b) incoherent.

Sol. The resultant intensity is given by

(a) The sources are said to be coherent if they have constant phase difference between them. Then intensity will be maximum when f = 2np; the sources are in same phase.

The geometry of experiment is simple Parallel wavefront of a monochromatic wave are incident on two identical narrow slits, each of width a separated by a distance d. The slit widths & their separation are of the order of the wavelength of the incident monochromatic light. Monochromatic light after passing through two slits S1 & S2 acts as coherent sources of light waves that interfere constructively & destructively at different point on the screen to produce a interference pattern.

We have insured in the above arrangement that the light wave passing through S1 is in phase with that passing through S2. However the wave reaching P from S2 may not be in phase with the wave reaching P from S1, because the latter must travel a longer path to reach P than the former. We have already discussed the phase-difference arising due to path difference. if the path difference is equal to zero or is an integral multiple of wavelengths, the arriving waves are exactly in phase and undergo constructive interference. If the path difference is an odd multiple of half a wavelength, the arriving waves are out of phase and undergo fully destructive interference. Thus, it is the path difference Dx, which determines the intensity at a point P.

For D >> d, we can approximate rays and as being approximately parallel, at angle q to the principle axis. 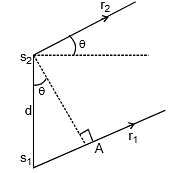 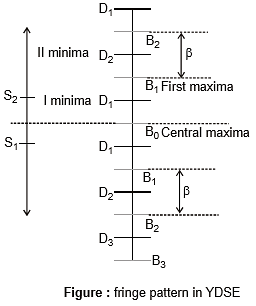 n = ± 2 corresponds to second minima and so on.

Sol. Angular fringe width is given by 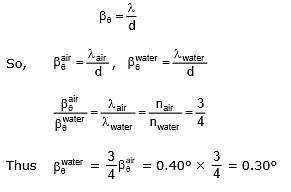 Sol. The position of nth bright fringe on the screen is

Thus the minimum values of m and n are 4 and 5 respectively.

(i) Find a distance between the first and central maxima on the screen.

(ii) Find the no of maxima and minima obtained on the screen.

clearly, n <<  is not possible for any value of n.

Total no. of maxima =

*(central maxima)Total no. of minima =

(i) fringe width b

Ex.9 A beam of light consisting of wavelength 6000 Å and 4500 Å is used in YDSE with D = 1 m and d = 1 mm. Find the least distance from the central maxima, where bright fringes due to the two wavelengths coincide.

Actual distance travelled by light in a medium is called geometrical path (Dx). Consider a light wave given by the equation

If the light travels by Dx, its phase changes by kDx = , where w, the frequency of light does not depend on the medium, but v, the speed of light depends on the medium as v =

where l0 = wavelength of light in vacuum

However in terms of the geometrical path length Dx,

On introduction of the thin glass-slab of thickness t and refractive index m, the optical path of the ray S1P increases by t(m - 1). Now the path difference between waves coming form S1 and S2 at any point P is 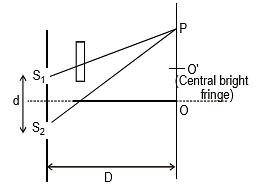 The whole fringe pattern gets shifted by the same distance

Similarly optical path for light coming from S2 is

The whole pattern is shifted by 1.5 mm upwards

Ex.11 Interference fringes were produced by Young's double slit method, the wavelength of light used being 6000 Å. The separation between the two slits is 2 mm. The distance between the slits and screen is 10 cm. When a transparent plate of thickness 0.5 mm is placed over one of the slits, the fringe pattern is displaced by 5 mm. Find the refractive index of the material of the plate.

Sol. The path difference introduced due to introduction of transparent sheet is given by Dx = (m - 1)t. 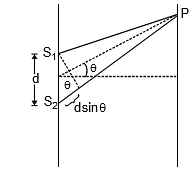 If the central maxima occupies position of nth fringe,

Hence is angular position of central maxima is

Shift of central maxima is

This formula can be used if D is given.

In YDSE, ray is incident on the slit at an inclination of q0 to the axis of symmetry of the experimental set-up for points above the central point on screen, (say for P1) 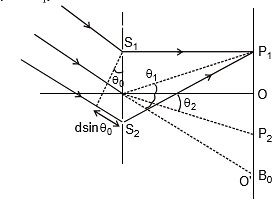 We obtain central maxima at a point where, Δp = 0

This corresponds to the point O' in the diagram

Hence we have finally for path difference,

(i) find the position of central maxima

(iii) Number of maxima lying between O and the central maxima. 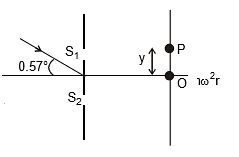 1. Shape of the Pattern when the interference takes place due to waves produced by two slits.

2. Shape of the Pattern when the interference takes place due to waves produced by two point sources(where the line of sources is perpendicular to the screen).

3. Shape of the Pattern when the interference takes place due to waves produced by two point sources(where the line of sources is parellel to the screen).

Central Maxima position (where phase difference = 0) is independent of the wavelength of light.

White light is used to find out the central maxima position of YDSE set up because at this position only, all the wavelength show constructive interference i.e. why we get white spot at that position.

However slightly below or above the position of central maxima fringes will be coloured.

Ex.14 White light, with a uniform intensity across the visible wavelength range 430-690 nm, is perpendicularly incident on a water film, of index of refraction m = 1.33 and thickness d = 320 nm, that is suspended in air. At what wavelength l is the light reflected by the film brightest to an observer ?

Sol. This situation is like that of Figure shown, for which equation written below gives the interference maxima.

Solving for l and inserting the given data, we obtain

Note : When a light gets reflected from a denser medium there is an abrupt phase change of p no phase change occurs when reflection takes place from rarer medium

Ex.15 Find the minimum value of x for which a maxima is obtained at P.

Sol. For maxima, Dx= l (because x should be minimum)

= x +  (due to reflection, a phase change of p or path change of  takes place)

Ex.16 Find the value of q for which a maxima is obtained at P.

Fig shows the Fresnel's biprism experiment schematically. The thin prism P refracts light from the slit source S into two beams AC & BE. When a screen MN is placed as shown in the figure, the interference fringes are observed only in the region BC. If the screen MN is removed, the two beam will overlap over the whole region AE.

If A is the angle of refraction of thin prism & m is the refractive index of its medium, then the angle of deviation produced by the prism is

If l1 is the distance between the source & the prism, then the separation between virtual sources is

Thus, by using the result of young's experiment, the fringe width is given by

Distance of 5th bright from the central bright band is

Ex.21 In a biprism experiment, fringe width is measured as 0.4 mm. When the eyepiece is moved away from the biprism through 30 cm, the fringe width increases by 50%. If the two virtual sources are 0.6 mm apart, find the wavelength of light used.

Ex.22 Interference fringes are produced by a Fresnel's biprism in the focal plane of reading microscope which is 100 cm from the slit. A lens interposed between the biprism and the microscope gives two images of the slit in two positions. If the images of the slits are 4.05 mm apart in one case, 2.90 mm in the other and the wavelength of light used is 5893 Å, find the distance between two consecutive bands.

Distance between the two coherent sources will be

The various postulates are :

1. Each source of light is a centre of disturbance from which waves spread in all directions. All particles equidistant from the source & vibrating in same phase lie on the surface known as wavefront.

3. Each ray take same time to reach from one wavefront to another wavefront

4. Every point on a wavefront is a source of new disturbance which produces secondary wavelets. These wavelets are spherical & travel with the speed of light in all directions in that medium.

5. Only forward envelope enclosing the tangents at the secondary wavelets at any instant gives the new position of wavefront.

There is no backward flow of energy when a wave travels in the forward direction.

Ex.23 For the given ray diagram, draw the wavefront

The document Principle of Superposition & Interference - Notes | Study Physics Class 11 - NEET is a part of the NEET Course Physics Class 11.
All you need of NEET at this link: NEET
Attempt Now
Join Course