What is Reflection of Light?

When a ray of light approaches a smooth polished surface and the light ray bounces back, it is called the reflection of light.

Laws of ReflectionThe laws of reflection determine the reflection of incident light rays on reflecting surfaces, like mirrors, smooth metal surfaces and clear water. The law of reflection states that:

Question for Reflection of Light
Try yourself:If the angle of incidence of a beam of light is 300, then what would be it's angle of reflection?
Explanation

Types of Reflection of Light

Different types of reflection of light are briefly discussed below: 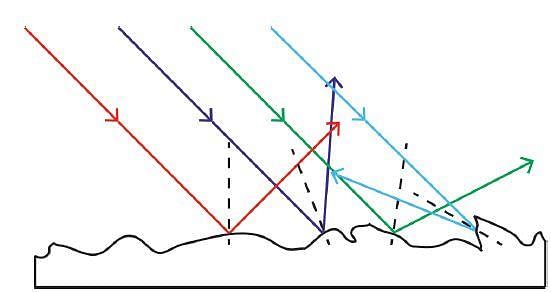 What happens if we use two mirrors?

Question for Reflection of Light
Try yourself:Two mirrors are placed parallely, how many images would be formed?
Explanation

When two mirrors are placed parallel to each other, inifinite number of images will be formed. This effect can be easily observed when your barber uses another smaller mirror to show you the back of your head.

We use the diagram shown below to answer the questions. 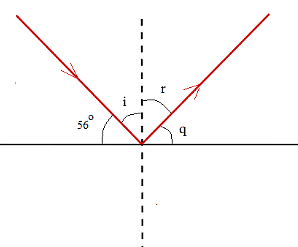 Let's use the diagram shown below to answer the questions. n1 and n2 are normal to the reflecting mirrors and are therefore perpendicular to the axis of the two mirror system.

b) The two mirrors are parallel and AB intersects both of them, hence angle r and i' are alternate interior and therefore equal in size.

The number of reflections N that will take place between the two mirrors may be approximated as follows.

We first complete the given diagram drawing the various rays at points of incidence. The diagram is shown below.

Let AD and CE be the normals to mirror (1) at A and C respectively.r = i (law of reflection)

In triangle OAD, we can write

In triangle ADB, we have

In triangle CBE, we have

In triangle OCB, we have

Example 4: Find angle α made by the system of the two mirrors shown in the figure below so that the incident ray at A and the reflected ray at B are parallel. 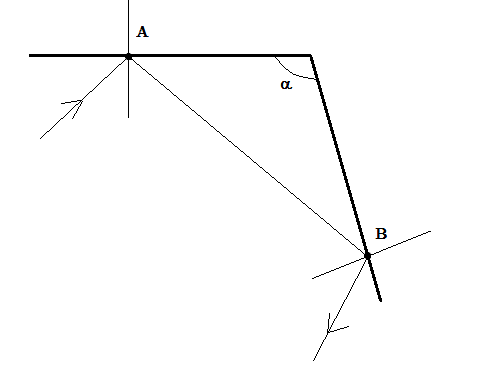 We first complete the given diagram with the angles of incidence and reflection as shown below and also labeling the incident and reflected rays. 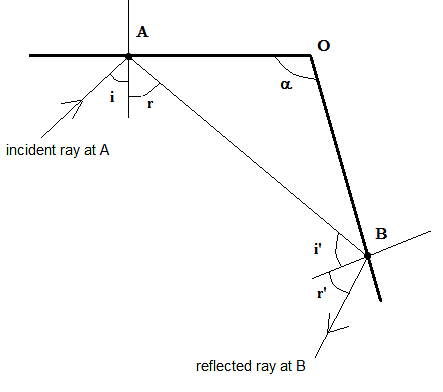 For the incident ray at A and the reflected ray at B to be parallel, angles i + r and i' + r' have to be supplementary.(geometry: parallel lines cut by a transversal).Hence

In triangle AOB, we have