The document Protein NEET Notes | EduRev is a part of the NEET Course Biology Class 11.
All you need of NEET at this link: NEET 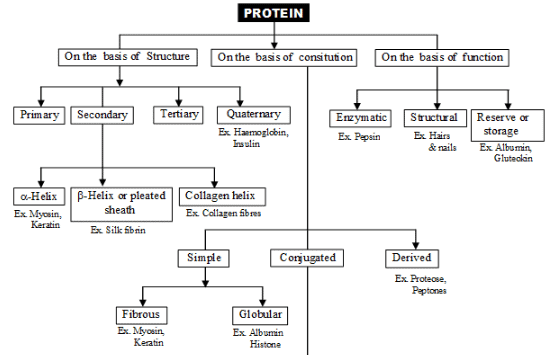 Protein name is derived from a greek word which means '' holding first place".

Iso electric point is that point of pH at which amino acids do not move in electric field.

Except glycine, each amino acid has two enantiomeric isomers.

Glycine is the simplest and tryptophan is complex Amino acid.

All the amino acids are laevo-rotatory, except Glycine which is non-rotatory.

instead of amino group so they are also called  Amino acids.

(2)  Secondary configuration – Protein molecules of sec. structure are spirally coiled. In addition to peptide bond, amino acids are linked by hydrogen bonds between oxygen of one amide group and hydrogen of another amide group. This structure is of two types –

(3) Tertiary Structure – Protein of tertiary structure are highly folded to give a globular appearance. They are soluble in water (colloid solution). This structure of protein has following bonds –

(iv)  Hydrophobic bond – Between amino acids which have hydrophobic side chains for e.g. Aromatic amino acid.

(v)   Ionic bond – Formation of ionic bond occurs between two opposite ends of protein molecule due to electrostatic attraction.

Majority of proteins and enzymes in protoplasm exhibit tertiary structure.

Quaternary structure is most stable structure of protein.

Significance of Structure of Protein –

1.   Simple Proteins -  proteins which composed of only amino acid.

(vii) Glycoproteins and Mucoproteins  – Glyco proteins have less than 4% Carbohydrates in their structure. They are most specific type proteins. e.g. α, β γ-globuline of blood group proteins, mucin, Erythropoetin etc.

3.   Derived Protein – These are formed by denaturation or hydrolysis of protein.

Oligomeric/Polymeric/Multimeric protein : Protein composed of more then one polypeptide chains.

Polypeptide : It usually has  more than 20 Amino acids.