The central dogma describes how the DNA makes its own copies by DNA replication, then codes for the RNA by means of a transcription and RNA codes for the proteins by translation.

For the creation of a new generation, the genetic information stored in the DNA has to be transferred from one generation to another. The process begins with the replication of DNA followed by transcription and translation. Let us have a discussion on translation viz. protein synthesis in cell and the structure of tRNA. 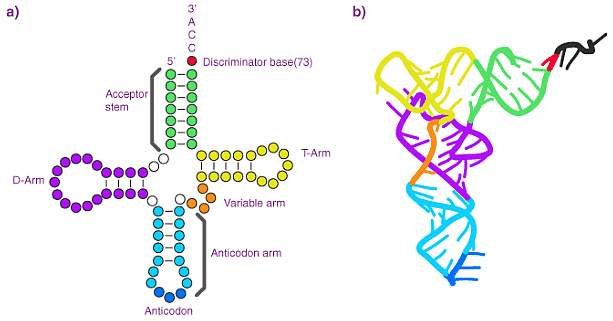 Structurally, the tRNA is an inverted L-shaped molecule which has an anticodon loop and amino acid acceptor end. The anticodon loop makes bases complementary to the codes on the mRNA and amino acid end binds to the respective amino acids. Thus, it helps in protein synthesis.  Each amino acid has a specific tRNA. Initiator tRNA initiates the translation while stop codons have no tRNA.

The process by which the mRNA codes for a particular protein is known as Translation. In the process, the ribosome translates the mRNA produced from DNA into a chain of specific amino acids. This chain of amino acids leads to protein synthesis.

It is a process where the expense of ATP is required and this energy is given by the charged tRNA.  The whole machinery of translation is present in the ribosomes.

The ribosomes consist of a bigger subunit and a smaller subunit. The larger subunit, in turn, consists of two molecules of tRNA that are placed close so that peptide bond could be developed at the expense of sufficient energy. The mRNA enters the smaller subunit which is held by the molecules of tRNA of the complementary codon, that exists in the bigger subunit. Hence, two codons are held by two molecules of tRNA, placed near to each other and a peptide bond is produced among them. When this process repeats, a large chain of amino acids is synthesized. At the stop, codon ribosome releases the amino acid chain.